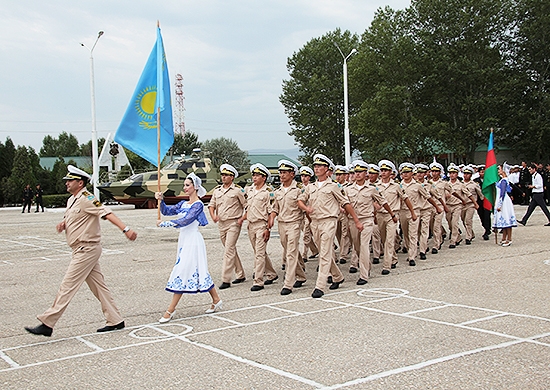 Russia has kicked off its inaugural "International Army Games," an Olympic-style competition for militaries, with 2,000 soldiers from 17 countries competing in 13 disciplines from a tank biathlon to naval games on the Caspian to a military cooking contest.

The biggest event by far will be the tank biathlon, in which 13 countries will compete. The tank biathlon was first held two years ago under the auspices of Russia's nascent military bloc the Collective Security Treaty Organization, and last year with an expanded guest list that also included China and India.

All the rest of the events are brand-new and only Belarus and China are competing in most of them (the Russian Ministry of Defense has an extensive English-language guide to the games here, with detailed explanations of the rules for each contest).

From the Bug Pit's coverage area, Armenia, Kazakhstan, Kyrgyzstan, Mongolia, Russia, and Tajikistan are all competing in the tank biathlon. Kazakhstan also is competing in the "Aviadarts" air force skills challenge, and both Azerbaijan and Kazakhstan are in the "Caspian Cup." The other participating countries are Angola, Venezuela, Egypt, India, Kuwait, Nicaragua, Pakistan, and Serbia.

When Russia announced plans for the Caspian Cup last year it was said that all five Caspian littoral states would take place, but Iran and Turkmenistan apparently didn't agree. In any case, that event kicked off August 3 in Kaspiysk, Russia, with two Azerbaijani missile boats, and two corvettes each from Kazakhstan and Russia. The units will compete in signaling as well as firing at aerial, surface, and underwater targets.

There's also another competition on the Caspian, the "Caspian Derby" for amphibious landing teams. The guest list for this one is especially curious: Kazakhstan and Russia are both taking part, but Azerbaijan isn't, and China is. Yes, it's only a game, but it's still interesting in light of the repeated insistences (led by Russia and Iran) that non-littoral states should have no military presence in the Caspian. That's usually understood as being directed at the U.S. and NATO, but China may get a pass?

The other events cover an impressive array of military disciplines, from air defense to nuclear-biological-chemical protection to vehicle maintenance.  While the event is intended in part as a team-building exercise between relatively friendly countries, it's also a sales opportunity for the Russian defense industry. At last year's tank biathlon, a Russian official explained that it was a good chance for potential customers to test-drive an advanced Russian tank: "Russia is showing some of its newest military devices to some countries planning on enhancing their own military strength. And one major event is the show of Russian-made modernized T-72B3 tanks, that is to say, many clients for Russian-made weapons had an opportunity to test such a tank through this competition." This year, the potential customers will get a look at the whole range of Russian equipment.