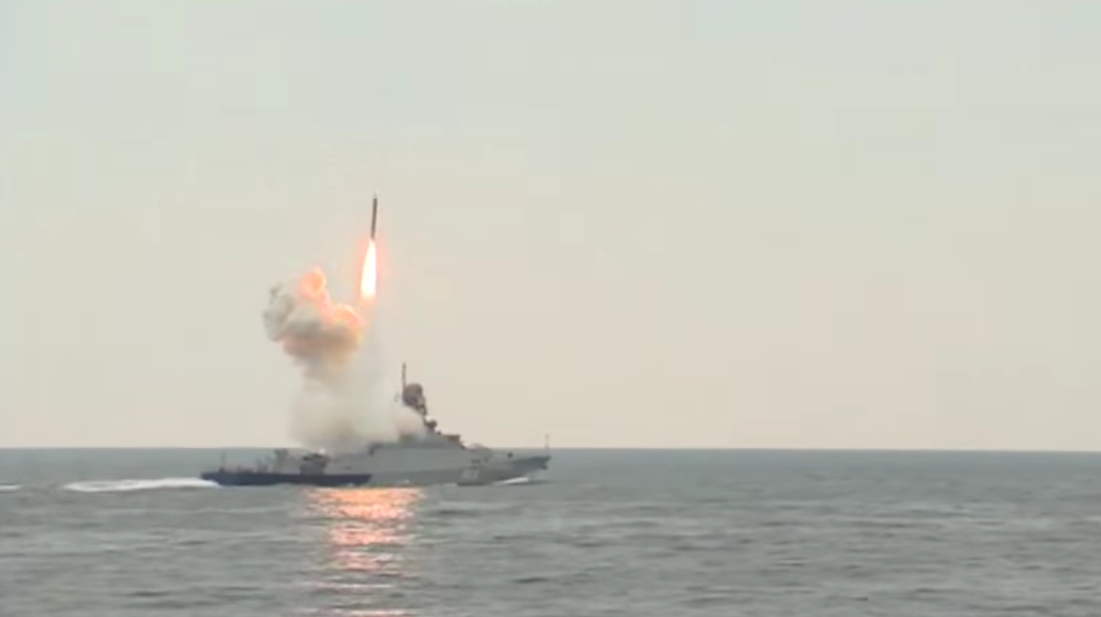 Screenshot of Russian MoD-produced video of launch of Kalibr rocket from the Caspian Sea.

Less than a month after its first-ever launch of a cruise missile from the Caspian Sea, the Russian navy has done it again, this time as part of a large-scale test.

The test, which Russia's military said was aimed at testing its system of its missile command system, involved simultaneous launches of various sorts of missiles from land, aircraft and warships from Kamchatka to Komi to southern Russia.

For Caspian watchers, the most interesting element of the exercise was the launch of a Kalibr missile from the ship Velikiy Ustyug of the Caspian Flotilla. This, recall, was one of the ships -- using the same type of missile -- that participated in the long-range strikes against Syrian targets earlier this month.

That test was widely interpreted as a demonstration of Russia's growing ability to strike targets from long distances. One American naval analyst said the test showed Russia's capacity for "distributed lethality," or dispersing its strike capability around many small sources.

"The Russians are adopting distributed lethality faster than the US,” said the analyst, Bryan Clark, a naval analyst with the Center for Strategic and Budgetary Assessments in Washington, in an interview with Defense News. “The arguments made for distributed lethality are to put firepower on a bunch of smaller ships, have them disperse, in turn increase targeting problems for the enemy, and you may be able to generate the same kind of firepower if you concentrate the platforms."

Friday's test is no doubt another demonstration of that ability, given the diversity of sources and types of missiles. This time, the Kalibr from the Caspian Sea was fired at a training target; neither the location of the target nor that of the ship was disclosed. Another test site was Russia's Kapustin Yar training ground, near the Kazakhstan border, where short-range Iskander missiles were launched.

The implications for the Caspian region itself are likely secondary (as was the case with the launches against Syria); the sea's role is largely as a staging ground with implications for other regions. But it is another demonstration that Russia sees the Caspian as a significant factor in its strategic calculations, and that in turn could either intimidate its Caspian neighbors, or make them more determined to build up their own defenses on the sea.

The Russian Ministry of Defense video of the Kalibr launch from the Velikiy Ustyug: