Russia: Looking at History as a Continuation of Politics 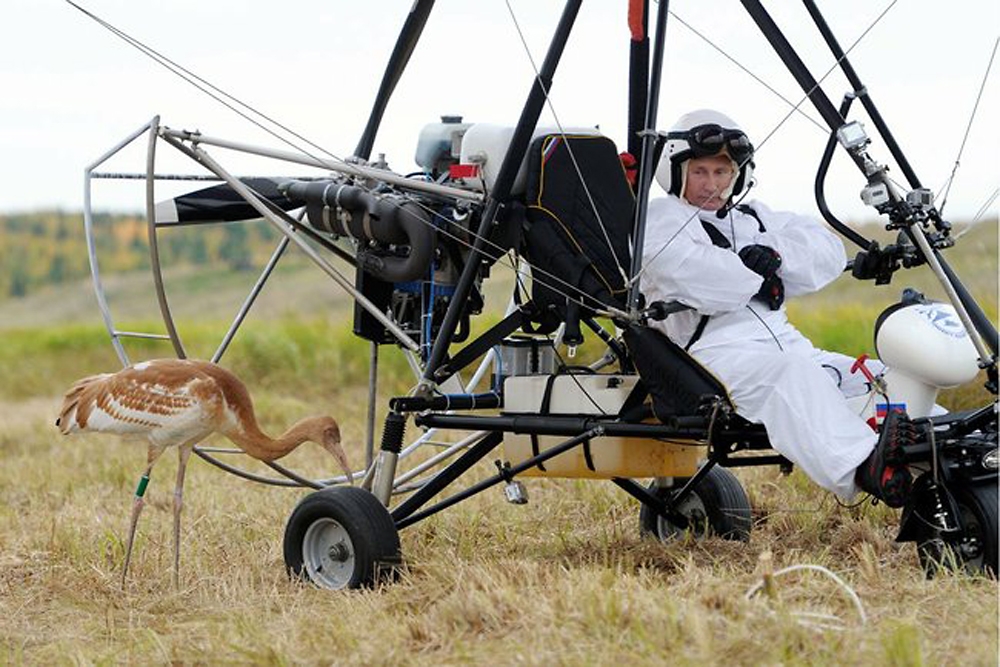 Sitting in an ultralight aircraft, Russian President Vladimir Putin watches a Siberian crane during a September 2012 visit to north-central Russia, where the Flight of Hope research expedition aims to rebuild the population of the rare birds in their native habitat. In his desire to rebuild and showcase Russia as a global power, Putin often discusses national pride and the glorious periods in Russian history. (Photo: Russian Presidential Press Service)

The leading Bolshevik historian Mikhail Pokrovsky famously defined history as “politics projected into the past.” Vladimir Putin, Russia’s president, is taking that concept, and running with it.

The importance of history to the Kremlin was on full display at Putin’s recent meeting with young scholars and teachers of history at Moscow’s Museum of Contemporary History of Russia. Putin made it clear that he believes control of Russia’s past will enable him to command the future. Referring to Russia’s culture wars being fought against both external and internal foes, Putin stated; “We see attempts being made … to recode our society,” adding that these malicious actions aimed at change “always go hand-in-hand with attempts to rewrite history and shape it to particular geopolitical interests.”

In earlier meetings with Russian academics, Putin has advanced a two-pronged message on the significance of shaping and controlling historical narratives: “Past events should be portrayed in a way that fuels national pride” and “We cannot allow anyone to impose a sense of guilt on us.”

The Kremlin’s overriding concerns in the Putin era when it comes to history have been to assert Russia’s status as a great power and not allow Moscow’s detractors to chip away at its political and moral capital, which rests largely on Russia’s victory over Nazism in the Second World War. It is within this context that Putin has argued there was nothing particularly “bad” in concluding a non-aggression pact with Nazi Germany in 1939. “These were the foreign policy methods at the time,” he contended. To help justify the Molotov-Ribbentrop pact, he noted that Western leaders cut a notorious agreement of their own, the 1938 Munich Agreement, with Hitler.

In the last few years, a new, third priority has emerged for Kremlin historiography, one prompted by the popular uprisings that swept away dictators and authoritarian-minded leaders in the Middle East and Ukraine. This new tenet of Kremlin historiography preaches social cohesion and damns the idea of loyal opposition to the ruling line.

During his exchange with young historians, Putin raised the theme of societal consolidation at least twice. Perhaps the most significant point in Putin’s talk came when he touched on the leadership style of Yaroslav the Wise, who ruled Kievan Rus in the 11th century. While Yaroslav presided over a cultural flowering and established his kingdom as a military power, Putin noted with veiled criticism that the grand prince failed to institute the type of clear-cut system of succession that had already been adopted by a number of early feudal Western societies. By contrast, “the procedure for succession to the throne in Russia was very complicated and tangled, and created fragmentation.” Ultimately, internecine strife among princes after Yaroslav’s death weakened the Russian state and endangered its very existence. “This is exceedingly important,” Putin said. “This history lesson about periods of fragmentation must trigger a danger signal. We must treat this very carefully, and not allow such things under any circumstances.”

Putin returned to this theme when he discussed the reasons behind Russia’s defeat in the First World War. By the end of 1917, Putin argued, Russia had found itself in “an entirely unique situation.” It “declared itself a loser” in the war and “lost enormous territories,” although “we were not beaten in battles on the front.” So why did this disaster occur? Putin gave a blunt answer; “We were torn apart from within, that’s what happened,” referring to internal disorder that ultimately enabled the relatively small Bolshevik faction to seize power in a coup.

Two interconnected factors underlie the governing elite’s approach to history writing. The first is connected with a deep-rooted authoritarian political culture in Russia. Scholars have long noted the close correlation between regime type and the degree of a regime’s reliance on historical myths. True, all regimes resort to and rely on myth-making. But political legitimacy in liberal democracies is much less dependent than in authoritarian regimes on a unifying historical narrative that fosters compliance with government policies. Genuine democracies are thus much more tolerant of dissent, controversy and competing ideas. Ultimately, democracies can afford the luxury of treating with relative equanimity a tradition of historiography that challenges habitual assumptions.

The second factor in Putin’s approach deals with how the Russian public has tended to view history as immutable: once written, it should not change. “History is a science and if you are serious about it, it cannot be rewritten,” Putin asserted at one point during his meeting with young historians.

Sociological data supports the view that Russians in the post-Soviet era do not see the writing of history as a constantly evolving process, in which what is received as “historical truth” in one era can (and should) be challenged and debunked when new evidence comes to light, or new interpretations are advanced. According to the recent data provided by VTsIOM, a Russian pollster, 60 percent of respondents believed past events should be studied in such a way that would exclude “repeat research” leading to new approaches and interpretations. Only 31 percent of those polled believed that the study of history is a continuous and open-ended process. Furthermore, 79 percent spoke in favor of using a single history textbook in schools so as not to confuse young minds with competing interpretations. Symptomatically, 60 percent said the passing of a “memory law” criminalizing the “revision of WWII results” would be a good thing.

Such polling results suggest that, in more ways than one, the prevailing attitudes toward history and memory demonstrate a meeting of minds between the rulers and the ruled in contemporary Russia.