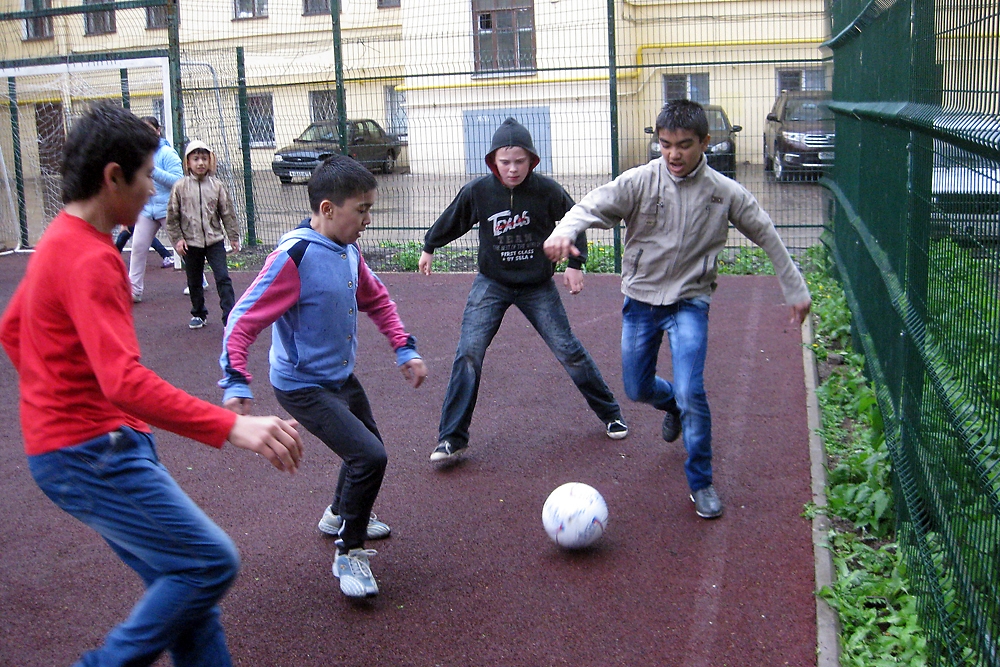 To most St. Petersburg residents, it’s a familiar scene: A group of children commandeer a courtyard for a game of pick-up soccer on a Saturday afternoon, rain notwithstanding. But these kids aren’t used to relaxing so openly in Russia’s second city. They are the children of Central Asian labor migrants, who often fall between the cracks of Russian society.

This match is a small part of an ambitious grassroots project, called Children of Petersburg, that aims to teach the children basic Russian, help them enroll in school, and introduce them to cultural life in St. Petersburg.

“Soccer is psychologically helpful for the kids,” said Ekaterina Glikman, a volunteer Russian teacher who organized the match. “Their parents are often afraid to let them go out alone because of xenophobia. Someone could beat them up or rob them. But here they can play and see it’s not so scary.”

Since the early 2000s, economic privation and poverty have driven millions of Central Asians to seek work as unskilled laborers in Russia’s booming cities. This wave of migration has become a source of significant social friction in Russia, where many locals resent the migrants’ cultural differences and, often, their poor command of Russian. Hardly a day passes without press coverage of the controversial migration issue. Members of the State Duma, hoping to combat drug smuggling and illegal migration – while throwing some red meat to their base – are considering requiring Central Asians to apply for visas to enter Russia. Reports of violence against Central Asians are common.

In this tense climate, Children of Petersburg is doing what few have tried: directly helping the youngest migrants integrate. “The problem is that there is no serious adaptation system for these children in the city,” said Daniil Lyubarov, the head of the project. “If there’s no such system, [the children] become burdens on teachers, school principals, and others.”

The project traces its roots to March 2012, when Lyubarov served as an independent election observer. While monitoring the polls, he got into a discussion with other observers about an issue that the government was not addressing: children who cannot speak Russian and the difficulties they create for the Russian school system. Within a week, the group had set up a page on VKontakte, Russia’s leading social network, to attract volunteers. A month later they held their first class.

Today, around 30 volunteers instruct 100 children, most of them ethnic Uzbeks, in the Russian language at nine locations throughout the city. Others help the project in various ways, from spreading information and providing technical support to organizing excursions to museums and theatre performances. Everyone donates their time, and the project is dependent on the willingness of schools, libraries, and community centers to let the teachers use their facilities. The volunteers also regularly help enroll children in school. They say they believe the majority of their children are in Russia legally, but they don’t ask. (And while most migrants leave their children at home, the increasing number of Central Asian women migrating to Russia for work means there are more children, as well, though there are no reliable statistics on the phenomenon.)

Glikman, who teaches Russian to school-age children and young teenagers in a public library on central Gorokhovaya Street, learned about Children of Petersburg online after returning from three years of living and teaching Russian in Thailand. Recalling the difficulty of living in a foreign country without language skills, she empathized with the children and decided to help.

The soccer matches began several months later, when she walked outside after class and saw some children playing soccer. At first, she thought that they were Russian boys from surrounding apartment buildings, but then she realized that her own students had also joined the game. “I was overjoyed,” she said. “I understood that, at a minimum, we had helped them start talking with local children. To me, that result was more important than whether they learned the difference between the masculine and feminine [nouns].”

Not everyone is as optimistic. Leokadiya Frenkel, who coordinates classes held in a Jewish Community Center, and teaches Russian to the very youngest children, is less sanguine about the challenges faced by older children. “If a child comes at 14, he has a poor chance of finding his place in society,” she said. “At sixteen, he has almost no chance.”

Frenkel is adamant that Children of Petersburg is not a substitute for formal schooling. For this reason, she only allows children to attend her classes for two months before she enrolls them in school, a task that can be difficult for foreign parents on their own. Schools will often reject the children of migrants, if their Russian is poor or if their parents are not proficient enough in the language to complete the necessary paperwork. For this reason, the assistance of a native speaker is often necessary.

In spite of some differences, what unites all the volunteers is their desire to help the children of labor migrants learn Russian and their belief that every child they help counts. “I don’t hope to change the world,” Frenkel said. “Even if we help only five children get into school, where they won’t fall behind and drag the class down, that’s success. If that happens, then we’ve helped many people – that child, the parents, the teachers, and Russian parents.”

There are signs the project may already be having an effect on the community, albeit a small one. Leaving the soccer field, Ekaterina Glikman waved to a local Russian boy walking down the street. “He and his friends asked to join our match,” she said with a smile. “Next time, we’ll call them and invite them to come play with us.”