Armenians responded by vigorous defenses that mostly glossed over the liberation hero's alliance with the Third Reich. 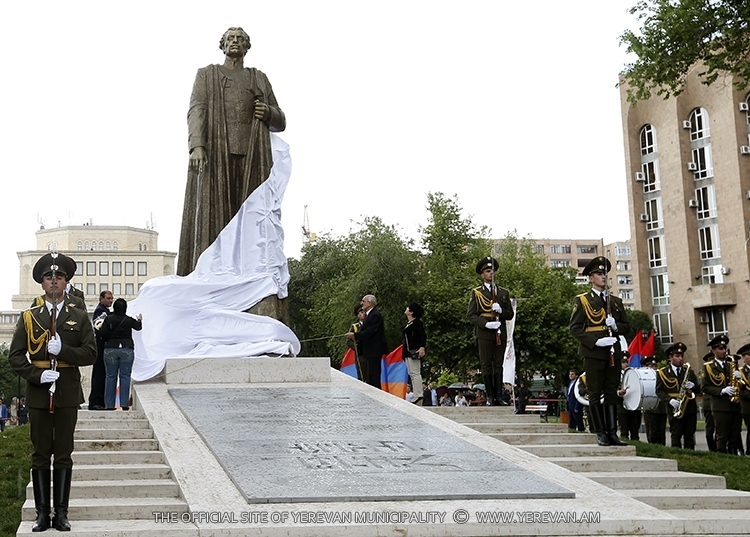 A monument to Garegin Nzhdeh, a controversial Armenian hero, unveiled in Yerevan in 2016. Attacks on Nzhdeh from Russia have been mounting. (photo: yerevan.am)

A senior Russian lawmaker wrote a piece in the newspaper Nezavisimaya Gazeta, published February 6, headlined “The Return of Nazism from the Baltics to Armenia.” The theme is not a new one for Russia, which has in recent years made great efforts to delegitimize nationalist fighters who collaborated with Germany in World War II in the cause of liberating their countries from Soviet rule.

But while that has become an old story in the Baltics and Ukraine, it's a new one in Armenia. Armenia, unlike those other states, is a close ally of Russia and until recently has been spared criticism for its heroes' dabbling in Nazi collaboration.

That may now be changing. “Armenia, a strategic ally of Russia, has erected a monument in the center of Yerevan to the Third Reich collaborationist Garegin Nzhdeh,” the lawmaker, Lyudmila Kozlova, wrote. Nzhdeh, she wrote, “has the blood of thousands of our grandfathers and great grandfathers on his hands.”

That followed an event in January at Russia's Duma, a roundtable discussion on “The Fight Against Valorization of Nazism and the Return of Neo-Nazism: Legislative Aspects,” at which the participants called on Armenia to take down the statue of Nzhdeh, which was put up in 2016.

These salvoes reopened a battle that appeared to have resulted in a ceasefire last year, when a Russian military television station aired a program making many of the same allegations against Nzhdeh. After Armenia vociferously complained that time, Russia quickly backed down, removed the program from the TV station's website and issued an apology. This time, though, the accusations are coming from higher up the power structure, and Russia has not apologized.

Nzhdeh, like any other historical figure, is complex. Over a period of decades, he fought all Armenia's foes, including Ottoman Turkey and early Soviet Russia, and is credited in Armenia for his efforts in securing Zangezur, the southernmost part of Armenia, which the Soviets had wanted to award to Azerbaijan. But when World War II broke out, Nzhdeh threw his lot in with Germany, offering Germany his assistance and providing evidence that the Armenians were an Aryan people.

Ideally, an assessment of Nzhdeh's legacy would take all of that into account. But there's no room for nuance in the black-and-white, zero-sum game of post-Soviet World War II politics. And the attack on Nzhdeh was parried vigorously by Armenians across the political spectrum.

Eduard Sharmazanov, the spokesman for the ruling Republican Party of Armenia, used one of Russia's favorite tactics against it: whataboutism. “To those who attempt to tie Nzhdeh to fascists, I respond: if someone collaborated with fascists, then so did the entire Soviet leadership led by Molotov and Stalin from 1933-41 with the non-aggression pact with Nazi Germany led by Adolf Hitler,” he said.

“Of course, neither will Russians be able to take down the monument of Nzhdeh, nor will we be able to bury Lenin from Yerevan, but at least in Russia they should realize that it will not be possible to return to the regime under which the Armenian people suffered,” added pro-Western opposition politician Stepan Safaryan.

Foreign Minister Eduard Nalbandian implied that Armenia's foe, Azerbaijan, was pulling the strings behind the scenes. “This is speculation from several enemies, and their reasons are completely obvious. This is being done intentionally, and it is not worth falling into the trap,” he said.

Azerbaijan's traces can in fact be found behind some of the anti-Nzhdeh movement from Russia. But not all. “Notice that in the Kozlova case, our leadership can not claim that we're dealing with some 'experts' or personal opinions, because the upper chamber the Russian parliament [in which Kozlova serves] is made of people who have been 'filtered' several times before reaching the Kremlin, where the candidates are examined with a microscope,” one worried commentator, Sargis Artsruni, wrote. “The Russians clearly don't have a problem with Gagerin Nzhdeh, or with his monument, but with [President] Serzh Sargsyan and the Republican Party of Armenia.”

Most of the rebuttals did not attempt to justify Nzhdeh's collaboration with the Nazis. But the anti-Russian-propaganda website run by the pro-Western NGO Union of Informed Citizens and funded by the European Union, sut.am, went there.

“First of all, we should note that the [Nzhdeh-led unit] Armenian Legion was part of Wehrmacht, and not SS,” the Union wrote, in bold contravention of the rule of thumb that if you start to argue about the precise nature of Nazi collaboration, you've pretty much lost the argument. They went on: “Few people know that the aim of the creation of the Armenian Legion in the Wehrmacht was mitigation of the Turkish threat.”

Meanwhile, the Nzhdeh fight is set to become further internationalized: a statue of the controversial hero is to be erected in Bulgaria. Buckle up.