Russia: Primed for an Economic Meltdown 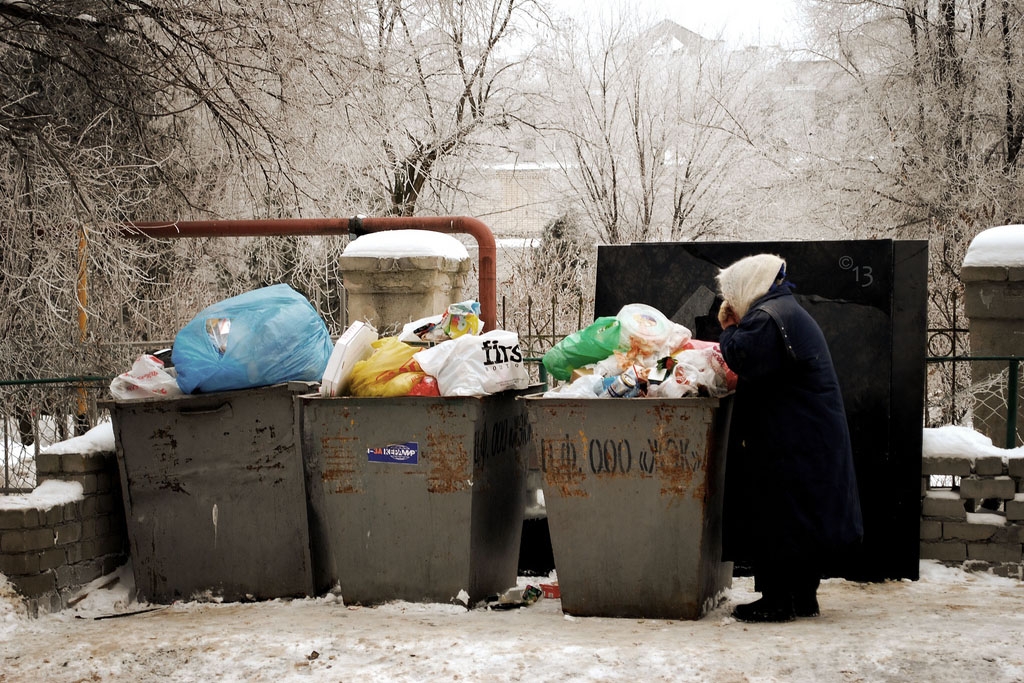 A babushka looking for food. According to a prominent European think tank, for a large proportion of Russia's population, basic food was the main component of their shopping basket in 2015, with the likelihood of worse to come amid a deepening economic crisis driven by low energy prices, government mismanagement, a collapse in the Russian ruble’s value and Western sanctions. (Photo: Mohd Hafizuddin Husin)

A prominent European think tank contends that the Russian economy may be entering into a death spiral, driven by a combination of factors, including low energy prices, government mismanagement, a collapse in the Russian ruble’s value and Western sanctions.

The recently published working paper, titled Russia’s Downfall: The Worst Crisis since the Collapse of the USSR, shows how Russia’s current crisis differs sharply from earlier bouts of economic instability, namely the country’s default in 1998 and the global downturn in 2008-9. It also suggests that Russian leaders are compounding problems by ignoring the grim, existing economic realities.

“Russian authorities have been consistently claiming during the past several months that the economic crisis in Russia has bottomed out,” the paper states. “However, a brief analysis of the raw data from the Russian economy, and the most realistic patterns of development of the situation, suggests that the crisis is not only far from over – it is actually only in the beginning phase, meaning that the economy has every chance of being further dragged into a strong downward spiral.”

Western sanctions, imposed after Moscow’s 2014 land grab of Ukraine’s Crimean Peninsula, have hit the Russian economy hard, in effect imposing a “credit blockade,” says the report, which was published under the auspices of the Brussels-based Wilfried Martens Centre for European Studies. This has drained Russian corporations of currency reserves, as they have had to scramble to repay a large amount of foreign-currency-denominated debt over a relatively short period.

A decade ago, Putin vowed to turn Russia into a high-tech state, and diversify the country’s exports. Little was done, however, to make good on that promise. Accordingly, Russia remains heavily dependent on commodity exports, namely oil and natural gas. At the same time, according to the report, “Russian consumer-oriented industry remains mostly uncompetitive.”

This combination of factors leaves Russia with little to fall back on in the current economic climate. The plunge of energy prices is starving state coffers of revenue, while the lack of competitiveness of Russian consumer-goods exports means that the country is unable to take advantage of its weakening currency by making its products more attractive to foreign buyers.

The dramatic slowdown in business activity in Russia has sent shockwaves through the consumer sector. With domestic industry unable to meet demand for many essential goods, Russians have had to devote an ever-increasing share of their incomes and savings to meeting basic needs via imports. According to official statistics, year-on-year inflation during the first three-quarters of 2015 stood at 20 percent, the Martens Centre report states, adding that there were “serious doubts” that Kremlin figures were accurately reflecting the situation.

“There are many signs that in 2015 Russians significantly reduced their purchases of long-term goods, and that, for a large proportion of the population, basic food was the main component of their shopping basket,” the report says.

Existing trends indicate the economy has to get much worse before there is any hope for a recovery. Manufacturers, for example, have been slow to respond to changing circumstances. The Martens Centre report highlights circumstances in the Russian automotive sector, which cut production plans for 2015 only by 10-15 percent, even though sales were declining for most of 2015 by a year-on-year monthly rate of 30-40 percent.

“The problem is that the decline in the domestic market-oriented manufacturing and services industries has not yet matched the sharp decline in domestic demand,” the report says. “These sectors have kept producing, hoping for a relatively swift recovery, driven by the experiences of past crises, and the constant reassurances from the authorities that [Russia has] ‘passed the bottom of the crisis’.”

The outsized influence of the state over the Russian economy throws a formidable obstacle in the way of economic recovery, the report asserts. “The decade-long implementation of the strategic idea of expanding the government sector of the economy, and making state investments a key driver of economic growth simply has not worked.”

“There are serious factors at work which will most probably drag the economy further down in a spiral effect — the destroyed domestic demand will force manufacturers to lay off people and reduce wages, causing further shocks to domestic demand,” the report warns.

Ominously, with few financial levers at their disposal to stabilize the economy, Russian policymakers are “playing around with the idea” of printing money on a massive scale, the report says. The potential massive emission of rubles into the economy by the Central Bank conjures up memories of the darkest days of the early 1990s, when the Russian economy was cast adrift amid the Soviet Union’s collapse.

According to its website, the Martens Centre was established in 2007 as the political foundation and official think tank of the European People’s Party (EPP). “It embodies a pan-European mind-set based on centre-right, Christian Democrat, conservative and like-minded political values and research.”