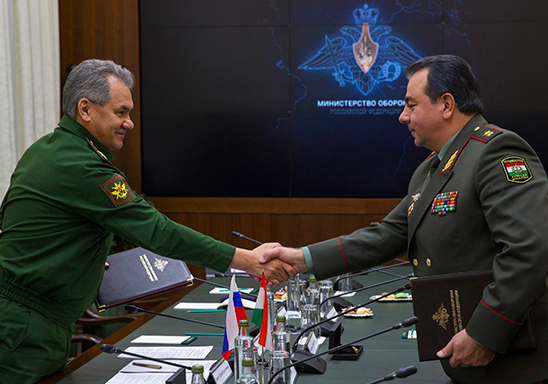 Russia has promised a "large quantity" of military aircraft to Tajikistan over the next year. The aid is part of a deal that the two countries signed in 2012, but which has taken on more urgency since Moscow began worrying about China's military/diplomatic advances in Tajikistan.

The deal was announced on November 30 at a meeting of defense ministers of the Commonwealth of Independent States in Moscow.

“Next year the key phase of our military-technical cooperation will begin, the delivery of weaponry and military equipment,” said Russian Defense Minister Sergey Shoigu said after a meeting with his Tajikistan counterpart, Sherali Mirzo. “In particular, this is a large quantity of aviation equipment, airplanes and helicopters. I think this will be implemented according to plan and on schedule.”

Shoigu didn't provide any additional information about the aircraft. On December 2, the newspaper Asia Plus, citing an unnamed Tajikistan defense ministry source, said that all of the equipment would be new, not used. And it wouldn't be only aircraft. “The forthcoming Russia’s armament supplies to Tajikistan will include a large number of aviation equipment, including combat aircraft, as well as armored vehicles and communication means,” the source said.

That MoD source said the deal was a continuation of an agreement made during a visit by Russian President Vladimir Putin to Dushanbe in 2012, when Tajikistan allowed Russia to extend the lease of its military base in the country for another 30 years. At the time Russia said it was paying only a "symbolic sum" for the privilege, but then Russian media reported shortly afterwards that the deal included $200 million in military aid to Tajikistan. That figure was then boosted to $1.2 billion in 2015, Russian media reported.

Tajikistan's air force is basically non-existent, and its only usable aircraft are a handful of trainer aircraft and an attack/assault squadron of Russian Mi-8 helicopters.

The Russian MoD's announcement of the deal framed it in terms of helping Tajikistan protect its border with Afghanistan. After the meeting with Shoigu, Mirzo promised that “the southern borders of our Commonwealth will be securely guarded.”

The deal also takes place against the backdrop of another interesting conflict in Central Asia: the growing geopolitical clout of China, especially in terms of Beijing's military relations with Tajikistan. In October, China and Tajikistan held their first-ever joint bilateral military exercises in Tajikistan. The month before, Tajikistan announced that China would build 11 border guard posts along the border with Afghanistan, as well as a border guard training center.

And earlier this year, China and Tajikistan, along with Afghanistan and Pakistan, created a "Quadrilateral Cooperation and Coordination Mechanism" to jointly combat terror. This organization, details of which are still hazy, is noteworthy particularly in that it represented a Chinese security cooperation initiative in Central Asia that excludes Russia.

"There is a danger in this new alliance, along with Pakistan and Afghanistan China is including Tajikistan, which Russia has until recently considered part of its zone of influence," said Andrey Serenko, of the Russian think tank Center for the Study of Contemporary Afghanistan, in an interview with the newspaper Izvestiya in March after the quadrilateral group was formed. "Russia's involvement in Ukraine and the Middle East have resulted in us losing our position in Central Asia. It appears that in this 'Central Asian NATO' under the Chinese umbrella, Russia may be the odd one out."

Is this aircraft deal part of an attempt to woo Tajikstan back? Seems plausible.