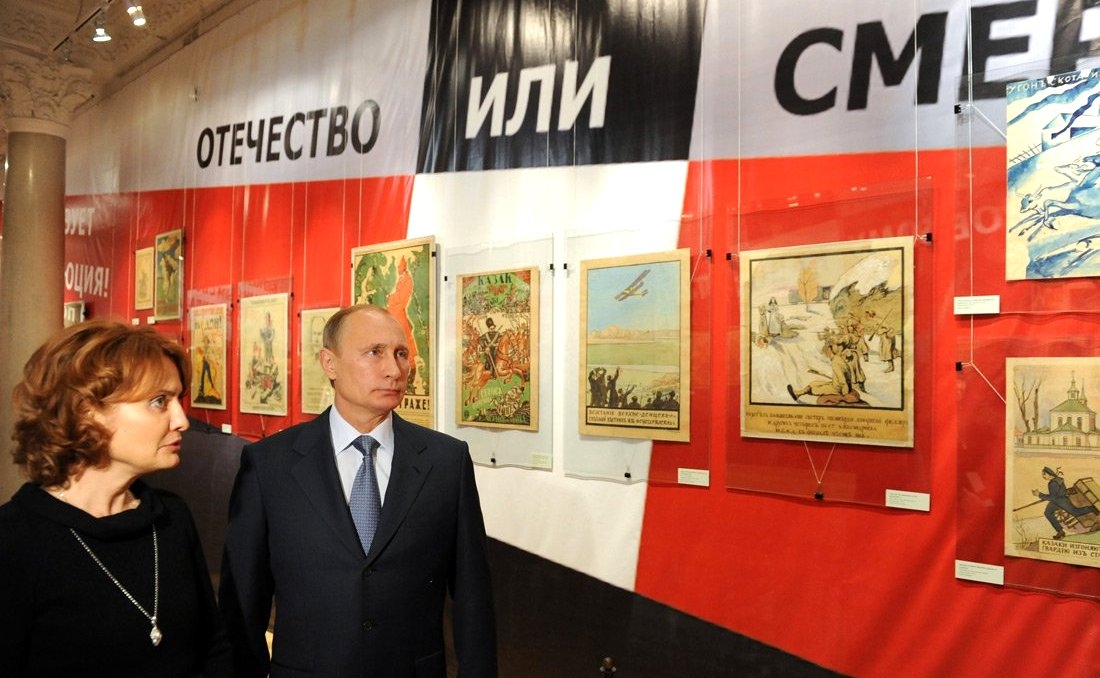 Russian President Vladimir Putin visits the Museum of Contemporary History in Moscow after a meeting with young historians and history teachers in November 2014. According to a number of biographical accounts, history was Putin’s favorite subject in school, and he appears to retain a keen interest in history right up to the present day. (Photo: Russian Presidential Press Service)

According to a number of biographical accounts, history was Russian President Vladimir Putin’s favorite subject in school, and he appears to retain a keen interest in history right up to the present day.

If we are to believe the president’s press secretary, Dmitry Peskov, Putin remains a voracious reader, devouring dozens of books on Russian history. But Putin, of course, is not just a modest student of the past. He seems to aspire to be also a manufacturer and manipulator of it.

Nikolai Zlobin, a Washington-based political analyst, has asserted that each of Putin’s presidential terms had its own “governing idea.” The first was mainly about politics, as the Kremlin was striving to consolidate Russia’s “state sovereignty” and restore centralized control over the country by forging the so-called “vertical of power.”

The second was about economics, with Putin’s administration preoccupied with building state capitalism – beefing up the muscle of the country’s state-run energy majors with the aim of turning Russia into an “energy super power.”

Putin 3.0, Zlobin has suggested, has focused on ideology. The Kremlin leader is striving to consolidate his power in the present and secure his legacy for the future. The realization of these tasks will thus define his “moral and historic” stage.

Zlobin’s scheme of Putin’s political evolution is perhaps too neat to thoroughly reflect the much more complex reality “on the ground.” Yet the observation that the Kremlin is increasingly focusing its gaze on ideology and history is correct.

We appear to be witnessing a momentous shift in the Russian governing elites’ approach to values and ideals, as well as to the country’s past. Also, domestically, the Kremlin seems to lacks a clear plan for future prosperity, and seems to be experiencing difficulties with managing the present. Ultimately, the mechanisms of constitutional legitimacy – through elections – do not function properly. This leaves the Kremlin with only one option: to focus on achieving historical legitimacy.

For much of the last two decades, Moscow’s official position was that it shared the West’s basic liberal values. If its interpretation of these values often differed from Western understandings, Russian officials justified those differences with assertions of Russia’s special historical conditions.

These days, however, this position has clearly been abandoned. Now the Kremlin leadership has opted to uphold what it calls the “traditional national values,” epitomized in the extremely opaque notion of Russian “spirituality,” and vaguely defined “inner strength” found in Russia’s “thousand-year history.”

The current task of Kremlin ideologues is to conceptualize Russia’s historical path so it demonstrates that the values and principles underlying Russian civilization are homegrown values shaped over the centuries.

At the heart of Russia’s uniqueness and distinctness, Russian ideologues argue, lies its past in which the country had to face choices quite different from those made in Europe. As one recent article in a special issue of the magazine Ekspert, titled “Russia: Five Centuries of Empire,” contended: “Russia had no choice between being an empire or a ‘normal European democratic state.’ The choice was to be an empire or a colony.”

Such a statement implies an important corollary: if Russia’s only alternative has been submission to foreign conquest or political upheaval, some form of authoritarian rule would seem to be justified to deal with the threats.

Russia’s “Special Way” thesis will face a test in the coming year. Specifically, it will be interesting to see how Putin’s Russia marks the centenary of the 1917 Russian revolutions that ushered in the Soviet era of Russian history.

Almost from the moment of its demise, the Soviet era has presented a challenge for historians: was it a radical departure from the Russian experience, or a continuation of it?

In the immediate aftermath of the Soviet collapse in 1991, Yeltsin “democrats” expressed a desire to make a clean break with the Soviet past – with Yeltsin even musing about making the Russian Federation a legal successor of the pre-1917 Russian polity. But even during the last years of Yeltin’s administration, the Kremlin started toning down the anti-Soviet rhetoric and opted instead for the policy of tolerance towards the Soviet legacy which then evolved into the policy of cautious reconciliation. Putin’s rise to power ushered in a full-blooded reconciliation.

And these days, one poll showed a majority of Russians supporting the restoration of the Soviet Union.

“This is our common history and we need to treat it with respect,” Putin stated in his December 1 address to the Federal Assembly, referring to the 1917 political upheaval. He then went on to quote the prominent Russian philosopher Alexei Losev: “We know the thorny road our country has traveled. We know the long and tiring years of struggle, want and suffering, but for our homeland’s sons, this is all their native, inalienable heritage.”

Clearly approving of Losev’s patriotic elan, Putin then bluntly formulated his approach to Russia’s past: “We need history’s lessons primarily for reconciliation and for strengthening the social, political and civil concord that we have managed to achieve. … Let’s remember that we are a single people, a united people, and we have only one Russia.”

Putin’s administration, in its quest for historical legitimacy, seeks to synthesize disparate elements of Russia’s different “pasts” into a kind of eclectic fusion. This concoction then is presented, in the apt formulation of the historian Frederick Corney, as a “history without guilt or pain,” offering “reconciliation without truth.”

Ironically, the end result of this historiographical innovation immediately brings to mind a mocking description of an “ideal Russia” in Vladimir Nabokov’s novel Pnin (1957). Nabokov referred to a “reactionary Sovietophile mix” in the heads of some of his Russian contemporaries, for whom the “ideal Russia consisted of the Red Army, the God’s anointed Sovereign, kolkhozes, anthroposophy, the Orthodox Church, and hydropower stations.”