Azerbaijan said that its shooting down of a Russian helicopter was an accident. But now Russia reportedly wants the case to be investigated as a murder. 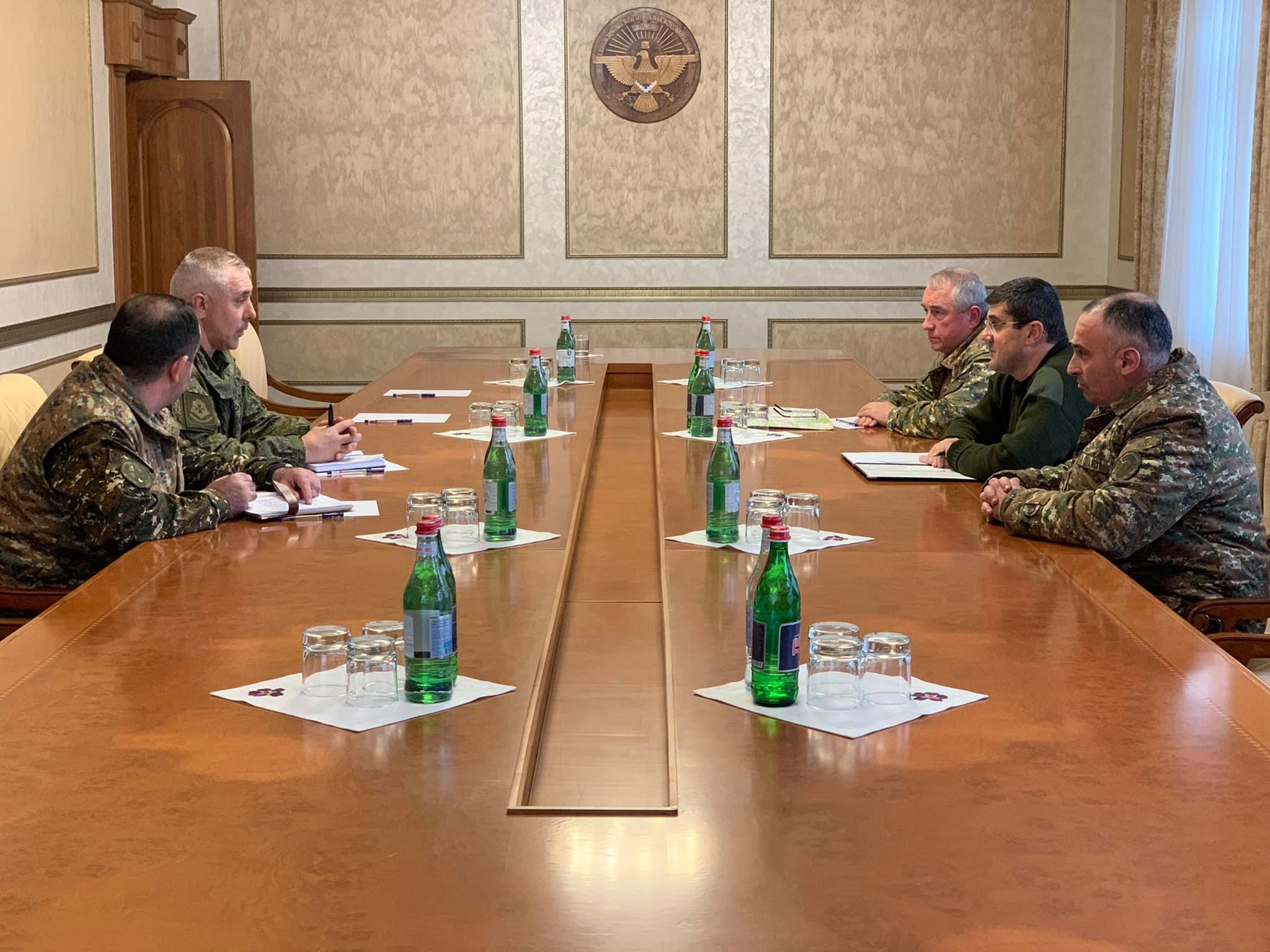 The de facto leader of Nagorno-Karabakh, Arayik Haratyunyan, meets with members of the Russian peacekeeping deplopyment in Karabakh, including the commander, Rustam Muradov. The Russians' tight cooperation with the de facto authorities has become a bone of contention in Baku. (photo: Facebook, Arayik Harutyunyan)

When Azerbaijan shot down a Russian military helicopter in the last hours of the war with Armenia, Moscow appeared to initially accept Baku’s explanation and apology that it was a tragic accident.

But now, nearly two months later, Russian military prosecutors have said they intend to pursue more serious charges and formally reclassify the case as one of “murder,” Russian media have reported.

The more serious charges suggest an intention by Moscow to play hardball with Baku, amid under-the-surface tensions that have developed as a result of Russia’s new military presence on Azerbaijani territory.

Azerbaijani forces shot down the Russian Mi-24 on the evening of November 9 on the border between Armenia and the Azerbaijani exclave of Nakhchivan. The helicopter was apparently servicing a small Russian outpost in the Armenian town of Yeraskh. Two members of the crew were killed and one injured.

Azerbaijan immediately apologized and explained that the shoot-down was an accident, even offering to pay compensation to the families of those killed. A few hours later the war ended with a Russia-brokered ceasefire deal.

Azerbaijan opened a criminal case into the incident and continued to try to assuage Russian anger about it. When Azerbaijan’s ambassador to Moscow seemed to downplay the incident, saying that “in war things like this happen,” Baku rushed to patch things up. Hikmet Hajiyev, the senior foreign policy adviser to President Ilham Aliyev, publicly rebuked the ambassador, saying that his statement “contradicted the official position of the country and the policies carried out by” Aliyev.

After that, the helicopter incident disappeared from the news. Kremlin spokesman Dmitriy Peskov was asked about the course of the investigation on December 21 and he replied vaguely: “Moscow and Baku are in regular, close, and constructive dialogue on all questions.”

Now, though, Russia is signaling that doesn’t intend to sweep the affair under the rug. Prosecutors there have reclassified the case from a statute on “violating flight rules resulting in accidental death” to “murder of two or more people,” Interfax reported on January 4, citing an “informed source.” The new charges, the source pointed out, carry a life sentence.

The next day Interfax carried another report, also citing an anonymous source, saying that Russia has asked Azerbaijan for information including the identity of those responsible for shooting down the helicopter. It also suggested that Russia was expecting Baku to prosecute the suspects. “Inasmuch as the case involves foreign citizens who cannot be extradited, most likely the Russian side will send investigation materials to Baku to prosecute,” the source said.

Azerbaijan has yet to respond to the reports and Azerbaijani media haven’t covered them. But they come as there has been widespread dissatisfaction amid the Azerbaijani public, opposition political groups and civil society organizations about Russia’s role in enforcing the ceasefire.

Nearly 2,000 Russian peacekeepers are now in the former combat zone. Azerbaijanis have objected to what they see as Russian sympathy for Armenians, in particular to the Russian soldiers’ close cooperation with the de facto authorities of Nagorno-Karabakh. The topic has been a regular issue on Azerbaijani social media.

Publicly the Azerbaijani government has tried to make nice with Moscow, but there is no reason to believe that behind the scenes they are any happier about how the Russian peacekeeping mission is unfolding. Stepping up this prosecution would be a means for Moscow to push back that is consistent with past Russian practice.