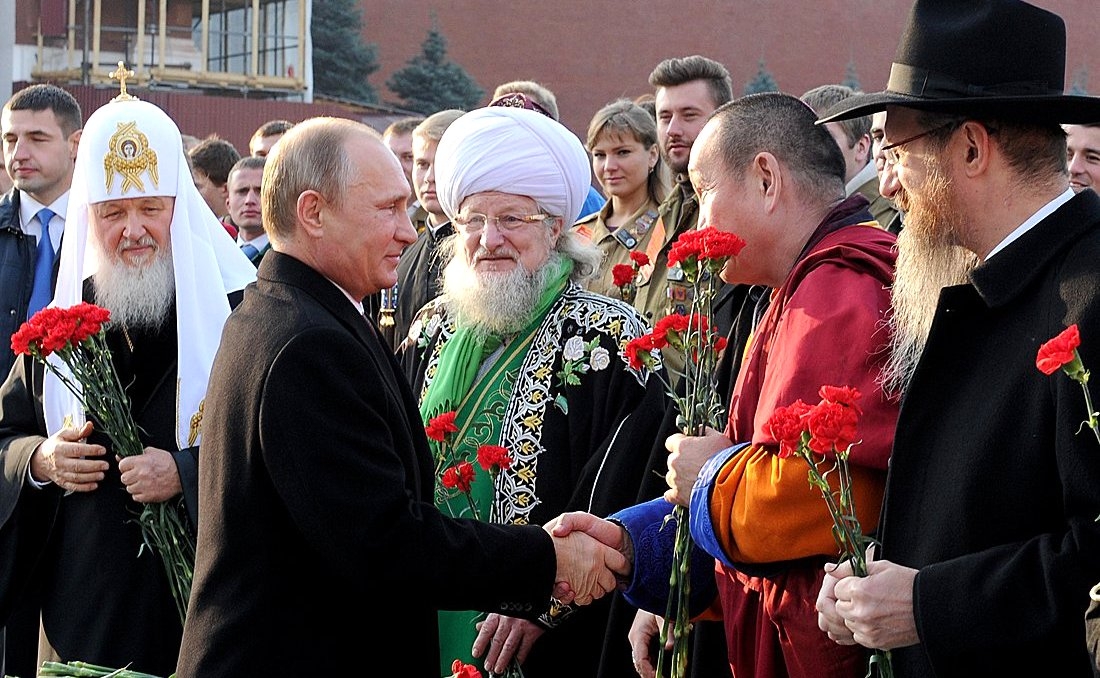 Russian President Vladimir Putin meeting with the heads of Russia’s major religious institutions on National Unity Day. Some experts in Russia are cautioning that the Kremlin’s unwillingness to address problems connected with the country’s imperial features, including their religious, ethnic and cultural aspects, is starting to pose a risk to the state’s territorial integrity. (Photo: Russian Presidential Press Service)

Some experts in Russia are cautioning that the Kremlin’s unwillingness to address problems connected with the country’s imperial features is starting to pose a risk to the state’s territorial integrity.

Time and again in Russian history, a major economic crisis has assumed a geographic dimension. This happens because of Russia’s multiethnic identity, as well as because of the specific organization of the state’s structure. The political system has tended to be overcentralized and, thus, when it comes under economic stress, it has proven brittle. In bad times, when the Kremlin cannot simply buy loyalty, the regions have become restive. This phenomenon led to tumult in 1917 and 1991, and now a Moscow-based think-tank is finding evidence that a similar pattern is developing.

In late January, the Institute of National Strategy (INS) released a collection of papers under the title Disunited Russia: Reports on Ethnopolitics. The collection found some alarming socio-political trends.

“The expansion of radical Islamism, the unchecked migration from the southern republics of the former USSR, the influence of ethnic organized crime and of the businesses run by ethnic clans, the proliferation of anti-Russian historical myths sponsored by ethnic ideological entrepreneurs, the ambitions of regional ethnocratic elites, the prospects of military conflicts and of the emergence of the wave of refugees on the southern borders of Russia – that is an incomplete list of challenges and threats that are discussed in this book,” the volume’s annotation reads.

On January 27, the INS held a roundtable discussion, called “The Crisis in the Middle East and the Ethno-Confessional Risks in Russia,” during which the main findings of the Disunited Russia study were presented. The multifaceted Middle East crisis (the emergence of ISIS, Russia’s military involvement in the Syrian war, and the rising tensions with Turkey) aggravates Russia’s already complex ethno-religious situation and creates new security risks for the country, the study’s authors argue. These new risks became particularly salient by the end of 2015 and can be divided into the three broad categories.

Perhaps the most attention-grabbing category discussed is the spread of a concept called “alternative loyalty.” In a number of Russian regions – mostly Muslim and Turkic-populated ones – loyalty to central government and to its policies among broad segments of local population is questionable and the “conditions have been created for the growth of political protest.” Moreover, alternative loyalty is nurtured by the whole system of religious, cultural and economic networks through which Turkey and the countries of the Middle East seek to influence Russia’s Muslim/Turkic populace in the Volga regions, North Caucasus and Crimea.

The second big risk is the rise of ethno-nationalism coupled with a tendency towards more independent actions on the part of political elites in various regions. Local elites, especially in Tatarstan, were reluctant to support Moscow’s position in Russia’s conflict with Turkey. “In the regions of Russia populated by traditionally Muslim ethnic groups, Islamist radicalism is closely intertwined with ethno-national separatism,” the study states. “These regions are [Turkic-populated] Volga provinces and the North Caucasus.”

Finally, there exists a possibility of the escalation of social tension along Russia’s strategic frontiers. Russia’s opponents in the Syrian war (above all Turkey) could try to manipulate existing problems and tensions in the “zones of vulnerability,” namely in the South Caucasus, Crimea and Central Asia. The potential for the escalation in the outer perimeter of Russia’s sphere of influence could likely negatively affect the ethno-political situation inside Russia’s most problematic regions.

The INS collection is the latest in a series of the Institute’s publications that analyze Russia’s socio-political situation and trends in interethnic relations, focusing specifically on mapping “ethno-religious risks.” In 2014 alone INS released four reports that investigate the challenges and threats to Russia’s security posed by “culturally alien” migrants (mostly from the Caucasus and Central Asia), with INS analysts vigorously lobbying for the introduction of visa regime with the non-Slavic ex-Soviet republics.

The INS was founded in 2009 as an independent think-tank by nationalist-minded Russian intellectuals who in the 2000s were associated with the group of “Young Conservatives.” The leader of the group and INS’s president is Mikhail Remizov, an articulate and prolific Russian ethno-nationalist. Remizov’s relations with Putin’s Kremlin are complicated: although he is a member of the Expert Council, a body of advisors attached to the Russian government, Remizov is not supportive of the Kremlin’s nationality policies. The country’s governing elites, he contended in a recent interview, do not formulate as their principal objective “the task of preserving Russia as a country with the predominant influence of Russian culture, as a country that is first and foremost Russian (russkaia).” By contrast, he characterized himself as “a champion of evolutionary Russification of the Russian Federation.”

For Putin, who is not an ethno-nationalist but a statist/imperial nationalist, such a stance as well as the conclusions of the INS latest study are likely way too radical.

It is noteworthy that, unlike all its previous reports, the Disunited Russia survey has not been posted on the INS’ website. One reason, of course, could be that it was designed as a commercial publication. Indeed, in the online catalogue of Biblio-Globus, one of Moscow’s largest bookstores, one can find the INS volume (with a print run of meager 500 copies) on sale for 879 rubles. Yet, there is also a possibility that INS decided not to annoy the Kremlin, or that Remizov was advised by some of his contacts in the government that it would be unwise for him to distribute such a “provocative” study in the public domain.

Twenty-five years ago, similar things were said about the other ethnic-based federation – the Soviet Union.