One Armenian-populated village was evacuated and taken – at least temporarily – by Azerbaijani forces, as Russia criticized Baku for breaching the ceasefire. 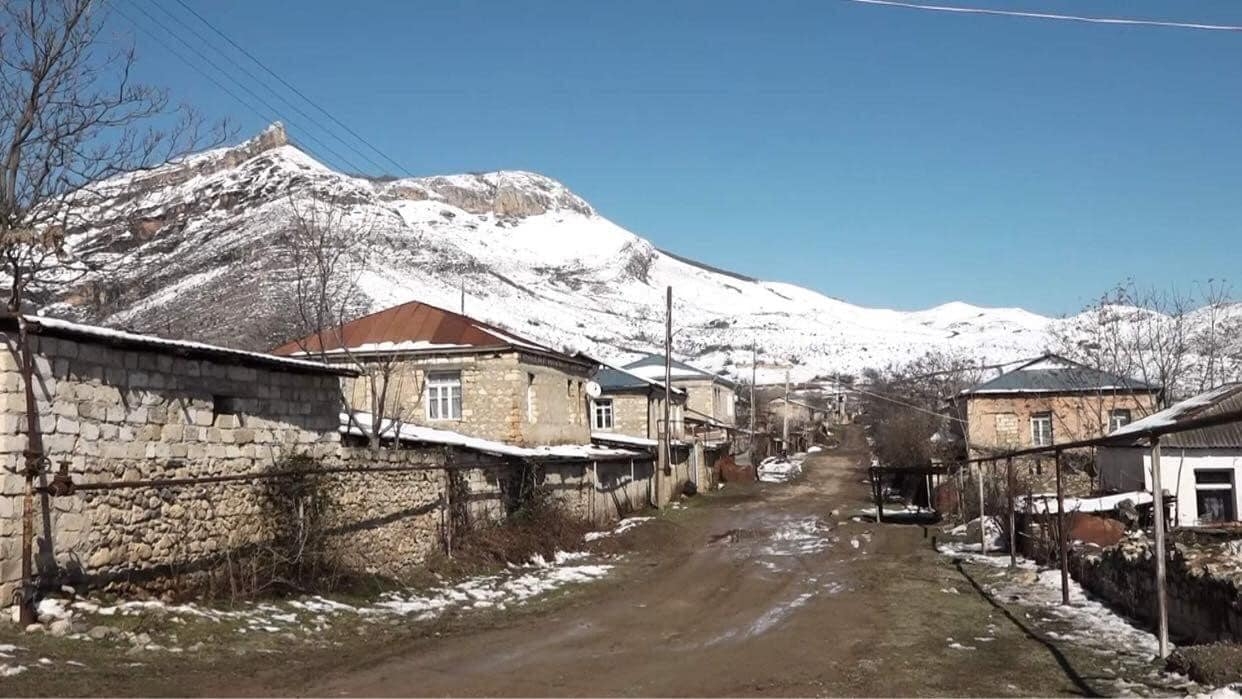 The village where the fighting flared (Karabakh handout)

Fighting has further escalated between Azerbaijani and Armenian forces in Nagorno-Karabakh, with Azerbaijan gaining new positions and Russia issuing a rare rebuke of Baku for violating the ceasefire.

The fighting was centered around the village of Parukh (which Azerbaijanis spell Farrukh), about five kilometers west of the city of Aghdam, and the nearby height of Karaglukh. It has resulted in the deaths of three Armenian soldiers and 15 wounded. Azerbaijan did not report any casualties.

The village, which had been under the protection of the Russian peacekeeping force in Karabakh, was evacuated on March 24 and came under Azerbaijan control for some time, drawing a Russian reprimand.

“From March 24 to 25 the Azerbaijani armed forces, violating the November 9 [2020] trilateral ceasefire agreement, entered the area of responsibility of the Russian peacekeeping contingent on the territory of Nagorno-Karabakh and established an observation post,” the Russian Defense Ministry said in a March 26 statement. The MoD also reported that Azerbaijan had carried out four strikes against Karabakh forces from a TB-2 Bayraktar drone in the region.

There were conflicting reports about which side controlled the area as of March 28.

Azerbaijan had withdrawn its forces “from the region of the community of Furukh” following negotiations, the Russian Ministry of Defense said in a March 27 statement (using a Russianized version of the Armenian spelling).

Azerbaijan issued a combative denial of the Russian claim: “There have been no changes in the positions of the Azerbaijani army in the village of Farrukh and in the surrounding heights, which are part of the sovereign territory of our country,” its MoD said in a statement later that day. (The statement concluded with a criticism of Russia’s terminology. “There is no village with the name ‘Furukh,’” it wrote. “The name of the village under discussion is FARRUKH. We hope that in subsequent announcements, the name of the village will be indicated in the correct form.”)

The Armenian side followed with its own explanation. The de facto authorities of Nagorno-Karabakh said that while Azerbaijani forces had withdrawn from the village itself and that Russian peacekeepers had regained control, Armenian forces maintained control of “most parts” of Karaglukh as of March 28.

During the clashes, fears rose in Karabakh of a wider conflagration. The region’s de facto leader, Arayik Harutyunyan, declared martial law on March 26, banning demonstrations, strikes, and any activity by groups “engaged in propaganda or other actions spearheaded against the defense capacity and security” of the self-proclaimed Karabakh government.

While ceasefire violations have been common since the war ended in 2020, this flareup gained additional attention coming as it did amid Russia’s invasion of Ukraine. While it wasn’t clear what sparked this round of fighting, Azerbaijan has been seeking to take advantage of Russia’s focus on Ukraine, as well as a perception that the Russian military – the guarantors of the ceasefire in Karabakh – is not as strong as previously believed.

The surge in fighting also has been accompanied by a disruption in the supply of natural gas to Karabakh, which Armenian authorities blamed on Azerbaijan as part of its campaign to intimidate the ethnic Armenian population of the region.

The Armenian authorities took the rare step of blaming the Russian peacekeepers for the fighting. “We also expect the Russian peacekeeping contingent in Nagorno-Karabakh to undertake concrete, visible steps to resolve the situation and prevent new casualties and hostilities,” the Armenian Foreign Ministry said in a March 26 statement.

Armenian Prime Minister Nikol Pashinyan has held two recent phone calls with Russian President Vladimir Putin. In one call, on March 25, Pashinyan “raised the need to investigate the actions of Russian peacekeepers in the given situation and stressed the need for returning the Azerbaijani armed forces to their initial positions with the efforts of the Russian peacekeepers,” according to the Armenian readout of the call.

On March 25, Russian Defense Minister Sergey Shoigu reportedly held a phone call with his Azerbaijani counterpart, Zakir Hasanov, in which the two sides discussed “ways of stabilizing the situation in Nagorno-Karabakh and supporting security in the Caucasus.”

The United States and France also issued statements criticizing Azerbaijan for the flareup. Along with Russia, they are the other two members of the Minsk Group of the Organization for Security and Cooperation in Europe, the body that has led negotiations between Armenians and Azerbaijanis since the 1990s.

“The U.S. is deeply concerned about gas disruptions and Azerbaijan’s troop movements. Armenia and Azerbaijan need to use direct communications channels to immediately deescalate,” the State Department said in a statement.

“France deplores the incidents that have occurred in Nagorno-Karabakh, in particular the armed incidents and troop movements in the Parukh and Khramort regions,” the French Foreign Ministry said in its statement. “It requests that the forces which would have advanced withdraw to their initial positions in accordance with the ceasefire declaration of November 9, 2020.”

Azerbaijan fired back; in response to the American statement its Foreign Ministry complained that the United States “has not taken any effective steps to end the military aggression of Armenia against Azerbaijan, which has lasted nearly for 30 years” and blamed Washington for falling for “fake Armenian propaganda.”

There were reports in Armenian media that Armenian authorities had agreed to let the Azerbaijanis set up a post on Karaglukh in exchange for restoring the gas supply. Harutyunyan, the de facto Karabakh leader, denied the reports.