Russia Sees IS as Reason to Boost Control in Central Asia 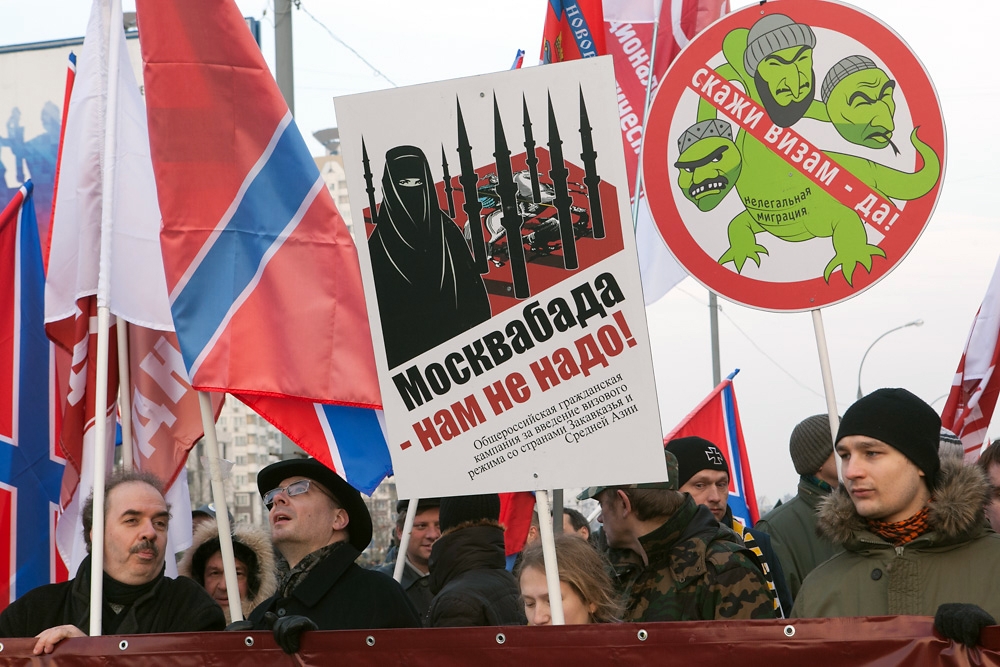 Protestors carry anti-migrant, anti-Islamic posters – one with the slogan "We don't need no Moscowbad" – at a Russian nationalist rally in Moscow on Nov. 4. Russian officials and pundits are sounding the alarm that the perceived growing presence of Islamic extremists in Central Asia is a threat to national security. (Photo: David Trilling)

How many Central Asians are fighting for the Islamic State in Iraq and Syria, and do they want to return to wage jihad upon their return home? No one knows for sure, but in recent months Russian officials and pundits have sounded the alarm. Their comments – often adhering to a narrative about weak states needing Russian protection – fit neatly with the Kremlin’s efforts to maintain, or even expand, its military presence in the region.

Nikolai Patrushev, secretary of Russia’s Security Council, for example, warned in September that IS could one day target Russia and Central Asia. “We understand that these people [Central Asian fighters in Iraq and Syria], having gained military experience and […] upon returning home can pose a serious threat to the national security of their own countries,” Patrushev said in his opening speech at a meeting of security council secretaries of CIS countries in Moscow on September 26.

Doomsayers of any nationality are widely quoted in Russian-language media. In late October, Rafal Rohozynsky, identified as a Canadian terrorism expert, told a conference in Astana that 4,000 Central Asians are fighting with the Islamic State. He claimed he derived that figure – far above what most academics believe – from a “careful” reading of online material. His comments were widely circulated by Russian-language news services.

Russian conspiracy theorists even argue that Western forces are helping to fuel unrest in the region. In the more extreme iteration of this theory, some Russians claim that the CIA supports the Islamic State in order to hurt Russia.

Russian commentator Alexander Sobyanin told Moscow’s Nezavisimaya Gazeta on October 21 that Central Asian militants are sponsored by American intelligence. The United States, he argued, wants to foment instability in Central Asia to convince local regimes to permit Washington to build new bases in the region. It is also noteworthy that the newspaper article’s author, Viktoria Panfilova, has long prophesied an Islamist takeover in Central Asia.

Russia maintains a military presence in Kyrgyzstan and Tajikistan, and, until 2005, Russian forces stood guard over the porous Tajik-Afghan border. Moscow seeks to return to those good old days. Russian lawmaker Semyon Bagdasarov – director of the Center for the Study of the Middle East and Central Asia – for example, has repeatedly used whiffs of instability to explain why Russian border guards should return to the Afghan frontier with Tajikistan, Turkmenistan and Uzbekistan. A Russian military presence in the region, according to this logic, is essential to maintaining security.

Bagdasarov cautioned in an interview broadcast on radio station Vesti FM in September that the Islamic Movement of Uzbekistan would work with the Islamic State to overthrow Central Asian regimes, beginning with Turkmenistan. Given the smothering level of governmental control exerted by Ashgabat, along with limited evidence of the involvement of Turkmen militants in extremist organizations, this seems unlikely.

Indeed, Russian officials have often stressed that the threat to Turkmenistan and Uzbekistan, which do not host Russian troops, is particularly acute. Nikolai Bordyuzha, secretary general of the Russia-led Collective Security Treaty Organization, announced in late September that Islamists are attempting to create an “underground extremist state” in Central Asia. He urged Turkmenistan and Uzbekistan to “cooperate in terms of overall efforts to ensure stability in the region.”

Some Russian pundits and officials use the purported threat to bolster xenophobic arguments against migration, in particular the migration of Central Asian Muslims in search of work in Russia. During a nationalist march in Moscow on November 4, demonstrators hoisted placards claiming that Central Asians bring religious extremism to Russia, and demanding Moscow not become “Moscowbad.”

Keeping the Moscowbad placards in mind, an increasing body of evidence indicates that some Central Asian IS fighters have become radicalized while living in Russia, not at home. Tajik fighter Olim Yusuf, 25, who was captured by the Iraqi government in early September, fits such a profile. Like many young Central Asian men, he left his home to work on a building site in Russia for $250 a month. Not particularly pious before traveling to Russia, earlier this year he was recruited at a local gym to go fight in Syria. Soon, he says in a video posted to YouTube on September 11 by Iraqi State TV, he was working as a driver for the Islamic State in Raqqa, its stronghold.

The vast majority of the millions of Central Asian labor migrants in Russia are moderate in their political and religious views. But it is unsurprising that the oppressive environment in which they live in Russia – where many are treated poorly and face the constant threat of violent xenophobic attacks – can radicalize some.

Some Central Asians are calling out the Russian-led fear-mongering. Responding to one alarmist article, Tajik blogger Rahmonali Mirzoyev wrote this month that “Moscow does not desist from its obsessive attempts to return to the Tajik-Afghan border.” The Islamic State, Mirzoyev argues, constitutes less of a threat to Tajikistan than Russian meddling does.

By hyping the threat of Islamist extremism in Central Asia, Russian commentators encourage a myth, one that hypes the notion that Central Asia is in imminent danger of being overrun by militant forces. Rather than securing the region, this alarmism legitimates policies in countries like Tajikistan and Uzbekistan that restrict basic liberties and feed a vicious cycle of repression and militancy. It is the inability or unwillingness of regional leaders to examine this vicious cycle that poses the real threat to Russia’s security.

Edward Lemon, a former EurasiaNet contributor, is now pursuing a political science PhD in the UK.