The 52 schoolteachers are being dispatched to locations all across the country, including to the Pamirs. 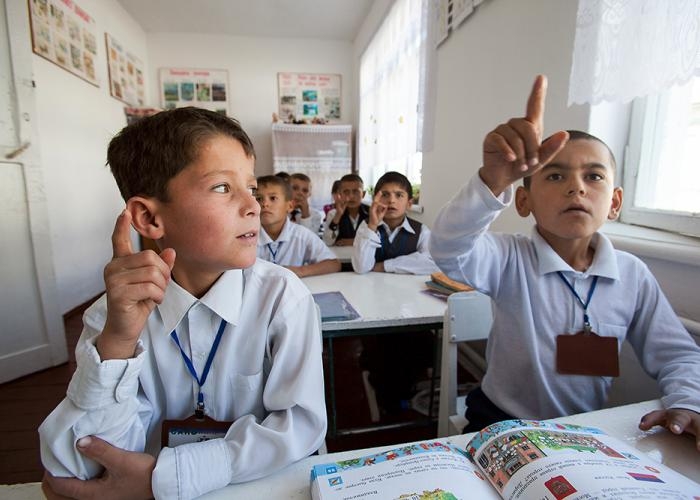 The teachers are being paid around $80 monthly by Tajikistan, but that salary is being topped up with another $890 from the Russian government. (Photo: David Trilling)

Russia has dispatched another 52 schoolteachers to Tajikistan as part of its ongoing efforts to assist the country’s struggling education system.

The teachers, half of whom are visiting the country for the first time, will be placed in schools across the country. Three will be based in Khorog, capital of the Gorno-Badakhshan Autonomous Oblast, or GBAO.

The Russian government’s program to place teachers in Tajik schools began in 2017. Twenty-nine people took part in the pilot program, although three eventually dropped out.

Under a bilateral agreement, Tajikistan pays the educators a salary equivalent to what local staff earn — around $80 monthly — and provides accommodation. The Russian government tops up those wages with another 60,000 rubles ($890). That salary amounts to a lot more than the same teachers might expect to receive for the same position back in Russia, so the placements in Tajikistan are eagerly sought.

The teachers are specialized in an array of subjects, including chemistry, biology, IT, math and the Russian language.

This represents only one part of Moscow’s efforts to prop up an education system that has suffered from chronic underinvestment and a brain drain that has deprived the country of its best-educated talent. In April, Foreign Minister Sergei Lavrov said that Russia plans to build five schools in Tajikistan. Instruction at the schools will be in Russian, he said.

In addition, a Russian middle school is to be built on the premises of the Orthodox Church in Dushanbe. Bishop Pitirim of the Dushanbe and Tajikistan episcopate has said that the school will not be a faith school, but that the students would work to a Russian program and receive corresponding middle school certification. Preference will be given to ethnic Russian children, although there are provisions to allow non-native Russian speakers to attend the school too, he said.

According to Education Ministry figures, there are 29 schools in Tajikistan where teaching is done in Russian. At another 126 schools, both Russian and Tajik are used.

This trend marks a small reversal on the unspoken policy of earlier years, when Tajik families were reportedly advised to refrain from enrolling their children in Russian schools in a presumed drive at asserting a stronger sense of Tajik identity.

The governments of the two countries had over the years discussed educational exchanges, but those had, until last year, come largely to nothing. President Emomali Rahmon declared in 2013 that his country could do with 4,000 Russian teachers. Without ever explaining how his government would pay for it, he vowed to provide all the necessary accommodation and salaries. Within a year, he had knocked off a zero, dropping his projection to 400 teachers.

The number of Russian teachers now being sent suggests goals are still very modest, although the trend points to this being a slowly expanding initiative.