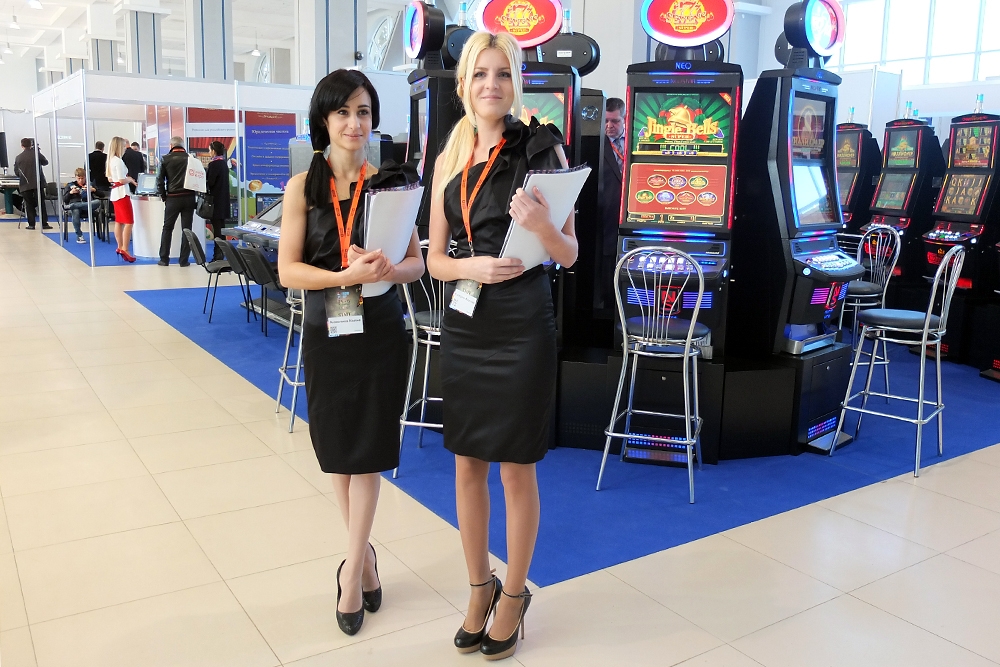 Young women welcome visitors to the Russian Gaming Week Exhibition-Forum held in Sochi in early November. Russia plans to bring gambling to the Black Sea resort town of Sochi, a project that could undermine Georgia’s dominance in the region as the place to go for blackjack and roulette. (Photo: Paul Rimple)

A decade ago, it was just another down-at-heels vacation destination. But the Black Sea resort town of Sochi has been transformed by hosting the 2014 Winter Olympics. And now, it aims to become a Russian version of Monte Carlo.

After Russia cracked down on gambling in 2009, the Kremlin restricted casinos to four far-flung gaming zones – Yantarnaya in Kaliningrad, Altai in central Siberia, Primorye in the Far East, and Azov City in Krasnodar. The Russian restrictions created an opportunity for the South Caucasus nation of Georgia to establish itself as a gambling hub, since gaming is prohibited in Azerbaijan and Turkey and restricted to a small zone in Armenia.

But now, just as a gaming industry is starting to make solid contributions to Georgia’s struggling economy, it faces a challenge from its outsized neighbor to the north, Russia.

Russia’s plan to bring gambling to Sochi came as a surprise addition to its move this summer to allow casinos in Crimea. The peninsula, forcibly annexed by Russia in early 2014, has experienced an economic crash, and Russian officials hope casinos can create jobs and generate revenue there. Sochi is also in need of new revenue streams to pay the bills for its Olympic make-over. State-owned Sberbank, which has a 92 percent stake in one of Sochi’s proposed gambling zones, Krasnaya Polyana, had been lobbying for a gaming license to help it recoup tens of billions of rubles it invested in the city for the winter games.

Russian President Vladimir Putin, who had originally opposed gambling in Sochi, signed the measure into law in July.

The move is the largest threat Georgia’s gaming industry has faced since 2013, when the Georgian parliament introduced a bill to ban gambling. The Georgian Orthodox Church, the country’s most influential institution, has opposed the spread of casinos.

Yet Georgian lawmakers understood the significant contribution casinos make to the state budget. In  2013, Georgia generated nearly 105.26 million lari (approximately $60 million), or roughly 2 percent of its state budget, from gambling taxes, according to the Revenue Service.

For the past nine years, the focal point of that sector has been the Black Sea port of Batumi, about 370 kilometers to the south of Sochi. Whereas Tbilisi casinos pay an annual license fee of 5 million lari, or $2.84 million, one of the highest rates in the world, Batumi casinos only have to ante up 250,000 laris ($141,000) annually. Anyone who builds a 100-room hotel with a casino is offered a 10-year freeze on annual license fees.

Today, Batumi has five casinos, with two more slated to open next year.

Mehmet Esen, finance director of Batumi’s Peace Casino, at the Sheraton Hotel, is not concerned about Russian competition. Russians make up a small percentage of Georgia’s gamblers, he noted. Most come from Turkey and Azerbaijan; and there is also a growing number from Iran. “Russian high-rollers go to Macau or Monte Carlo,” Esen said.

If Russia were to become serious competition for Batumi, he suggested, it would have to implement a sound gaming law and somehow change its negative gaming reputation. Gambling is largely unregulated in Russia and has a reputation of being connected to organized crime.

At a two-day November gambling industry conference in Sochi, Mustafa Yilmaz, a director at Princess Casinos International, which operates casinos around the world, told EurasiaNet.org he sees potential for Sochi to attract some of Georgia’s Azerbaijani and Turkish clients. Turkey currently enjoys a 30-day visa-free regime with Russia, while Azerbaijanis can stay in the country for 90 days visa-free.

In addition, whereas Batumi’s tourist season lasts only a few months in summer, Sochi attracts visitors in both summer and winter, Yilmaz pointed out.

But the lack of a clear strategy for Sochi’s gambling sector means Yilmaz and other casino investors currently have more questions than answers. Nobody knows whether the planned gambling zone will be 30 kilometers from the city center (at the Olympic Park Media Center), or 67 kilometers away, up at the Olympic alpine site of Krasnaya Polyana. Conference attendees said they also do not know the tax rates, number of licenses to be issued and how the casinos will be regulated.

Ultimately, whether or not Georgia’s gaming industry suffers from the appearance of Sochi casinos depends on the scale of investment and services there, said Ian Livingston, managing director at the Casino Adjara in the Georgian capital, Tbilisi. “If Sochi were to develop to such a degree as to be a mini-Vegas, then we feel it might draw some of our foreign players from surrounding areas,” he said.

Gambling experts agree this will not happen soon. “You need a few years just to start and it will take them one year just to figure out the legal questions,” said Darren Keane, chief executive officer of Storm International, a major gaming-industry player which operates Tbilisi’s Shangri La Casino, as well as a restaurant-bookmaker facility in Moscow.