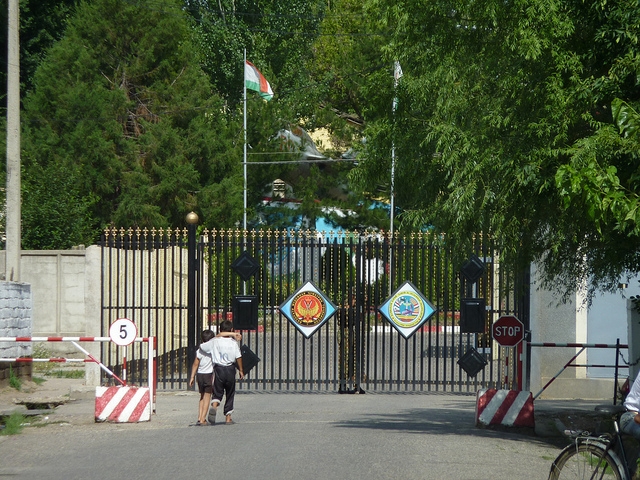 Gate of the Ayni air base outside Dushanbe. (photo: The Bug Pit)

Now that Russia has solidified its control of its military base in Tajikistan, it is looking to expand. A Russian parliamentary delegation in Tajikistan is starting negotiations on use of the Ayni air base, whose future occupancy has been the source of much speculation. As an air base, Ayni would complement the land forces base of the 201st Motorized Rifle Division that is based in Tajikistan. "Signing of an additional agreement on the Ayni air force base, which Moscow also intends to rent and to consider part of the 201st military base, is expected," according to a report in Russian newspaper Nezavisimaya Gaezta, citing Russian government and military officials. Russian officials indicated several months ago that they intended to do this; now it seems like the effort has begun in earnest.

After Russian President Vladimir Putin met his Tajikistan counterpart Emomali Rahmon at the Collective Security Treaty Organization summit last month in Sochi, he promised unspecified "support" of Rahmon in Tajikistan's upcoming presidential elections. And it was that pledge that prompted the recent moves to ratify the 201st base deal and also to start negotiations on Ayni, Nezavisimaya Gaezta writes.

And Russia considers an air base in the country necessary to support Russian and CSTO military activities in Tajikistan to strengthen the border with Afghanistan, especially since Uzbekistan is refusing to cooperate with Russian efforts in the region and has effectively blockaded Tajikistan.

"In the Russian Ministries of Defense and Foreign Affairs they understand well that the presence of only land forces in the country does not assure the resolution of the tasks facing the base in this dangerous period" as the U.S./NATO withdrawal of combat forces from Afghanistan approaches, the newspaper continues. "The build-up of military forces and equipment can only happen with the use of military-transport aviation, which should be deployed at a military air base in the region. Ayni suits that purpose. All the more so since Uzbekistan practically blockaded the only railroad leading from Russia to Tajikistan."

India, recall, spent a lot of money over the last decade developing Ayni, with the apparent hope of making that its bridgehead into Central Asia. But Russia appears to have thoroughly thwarted those plans. One funny (and sad, for Indian strategists) line in the NG story notes India's renovations at the base, but framing it as a joint effort between Russia and India, and that Russia "recently supported India's membership in the Shanghai Cooperation Organization," as if that was all New Delhi was looking for out of its millions of dollars expended.

And so Russia's military expansion into Central Asia continues apace...