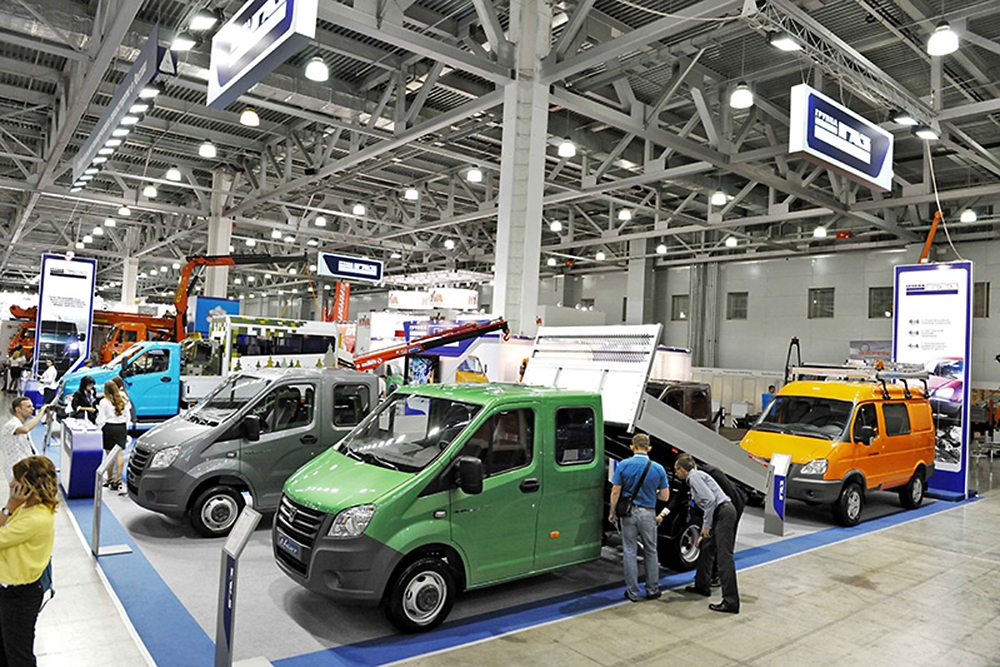 GAZ commercial and transport vehicles are on display at the 2014 Construction Equipment and Technologies exhibition in Moscow. (Photo: GAZ Group)

As Russia’s economic downturn continues, some experts and politicians are sounding an alarm about the country’s long-term competitiveness, and are calling for increased government spending to stimulate manufacturing and bolster education. Investment in those sectors has not seemed to be a government priority of late, but there are signs that official thinking may be changing.

Russia’s budget deficit is projected to hit 4 percent of GDP in 2016. That, in turn, is expected to lead to a 10-percent decline in government spending this year. Given the significant costs associated with maintaining Russia’s (even downsized) military expedition in Syria, the reduction in spending will likely necessitate big budget cuts outside of the defense sector.

Even in such lean times, there are some in Moscow who are saying the government needs to increase investment in strategic economic areas. Such thinking was prevalent at the Moscow Economic Forum, held in late March at Moscow State University. The forum’s co-chair, Konstantin Babkin, spoke about the need for greater infrastructure investment. He pointed out that global production had doubled in the last 25 years, but Russia’s productivity has lagged far behind the global average.

Russia’s state budget has been hit hard in 2016 because of the drastic fall in revenue primarily brought on by low energy prices. For more than a decade, Russian leaders have talked about diversifying the economy, and reducing the country’s dependence on energy export revenue, but they have yet to turn words into action. For example, during his first stint as Russian president in the early 2000s, Vladimir Putin pledged to create “an economy of [technological] innovation” in Russia. And during his interregnum as prime minister, Putin said the government’s top priority was to lessen the country’s dependence on energy and raw materials exports by developing “innovative industries.” But official statistics indicate that the share of manufactured goods, as a percentage of Russia’s overall exports, has fallen significantly under Putin’s leadership.

Just about the only area where Russia has shown an ability to innovate is in the defense sector, underscored by the Russian military’s successful use of ship-launched cruise missiles during the recent Syrian campaign.

While Russia’s arms exports might be able to generate some revenue, the key for a revival of the economy is stimulating the civilian sector. Babkin, the Moscow forum co-chair and the leader of the Party of Action, said he is heading a petition drive for an economic blueprint, called the Charter of 2016, which advocates change in Russia’s economic policy in favor of rapid industrialization and a greater emphasis on economic areas where Russia has a comparative advantage.

Meanwhile, the first deputy chairman of the State Duma’s Committee on Education, Oleg Smolin, is calling for a major spending increase in Russia’s educational infrastructure. State spending on education should rise to 5 percent of Russian GDP, Smolin urged. The OECD’s Education at a Glance report for 2015 indicates that Russian spending on education in 2015 amounted to less than 3 percent of GDP. Two years earlier, according to the OECD, it stood at 4.9 percent. If more money is not spent on training future generations, Smolin contended, Russians could find themselves unable to find high-skilled, well-paying jobs, and the country’s manufactured goods could fall further behind in global markets.

A number of participants at the Moscow forum called attention to growing income inequality in Russian society and its associated risks and fiscal burdens. One participant made a radical suggestion that Russia should leave the World Trade Organization and introduce “super taxes for the super rich.”

Although government officials did not attend the Moscow gathering, there are signs that the Kremlin is paying attention to the growing concern expressed by forum participants. On April 12, the Ministry of Industry and Trade published a draft proposal that would offer subsidies to Russian companies that stimulate the “realization of the means of production.” The draft is thin on specifics, and funds have not yet been allocated to cover the subsidization program. Even so, the existence of the draft subsidization plan suggests that the government is open to working with the nascent Charter of 2016 movement.