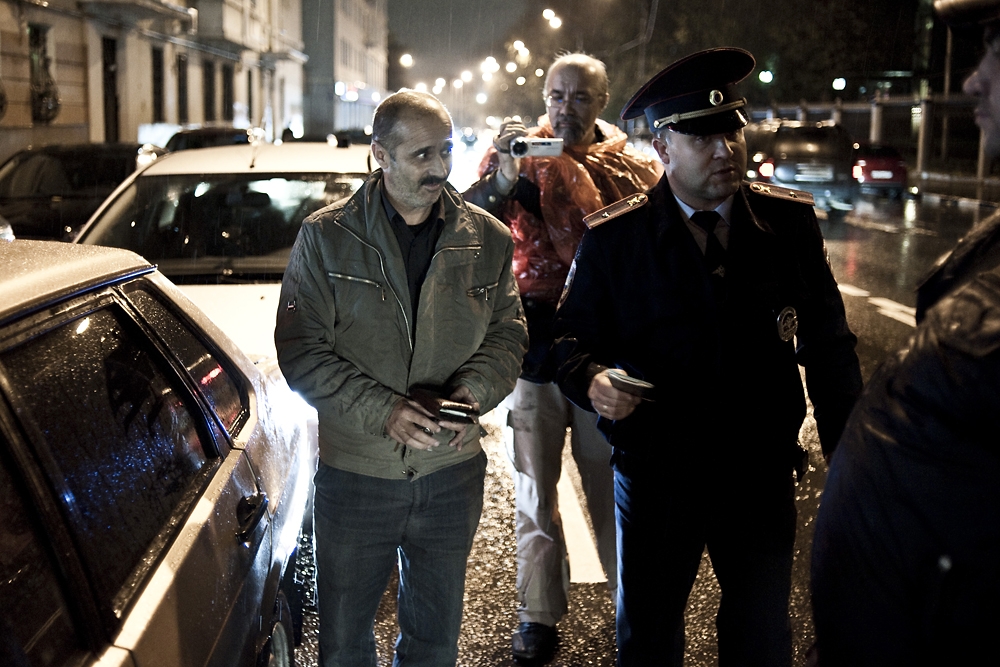 Police detain an unlicensed taxi driver from Azerbaijan during a sting to nab unregistered migrants. 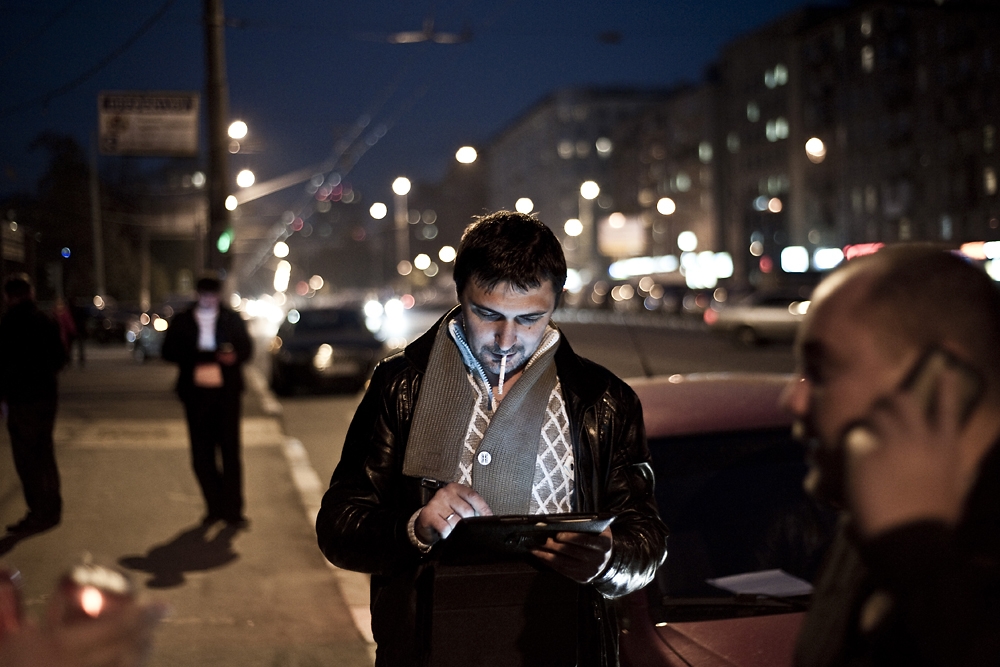 The group of Muscovites, who call themselves activists, try to target drivers from South Caucasus and Central Asian countries. 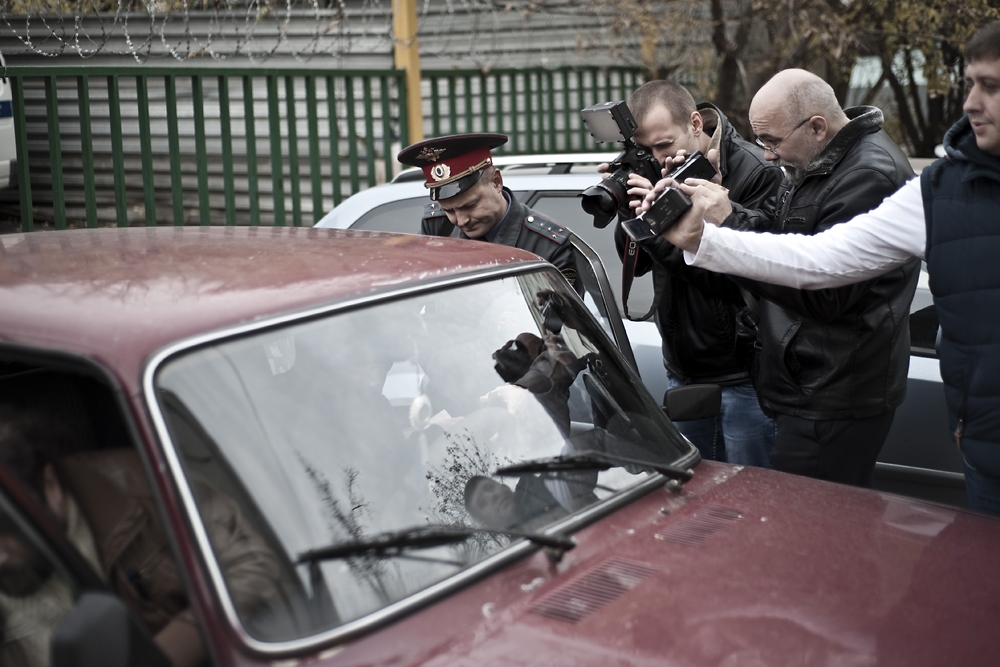 When an unlicensed taxi reaches the destination, the encounter with police is recorded on video as evidence. 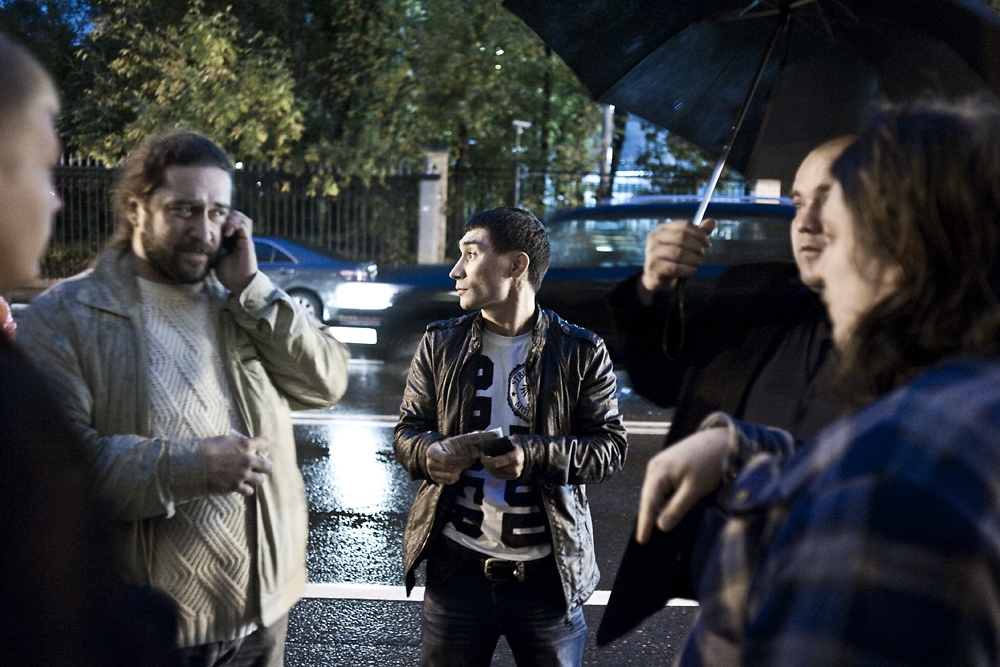 Evgenii Greck (on phone), the informal leader of the group, gets ready to set up another sting. 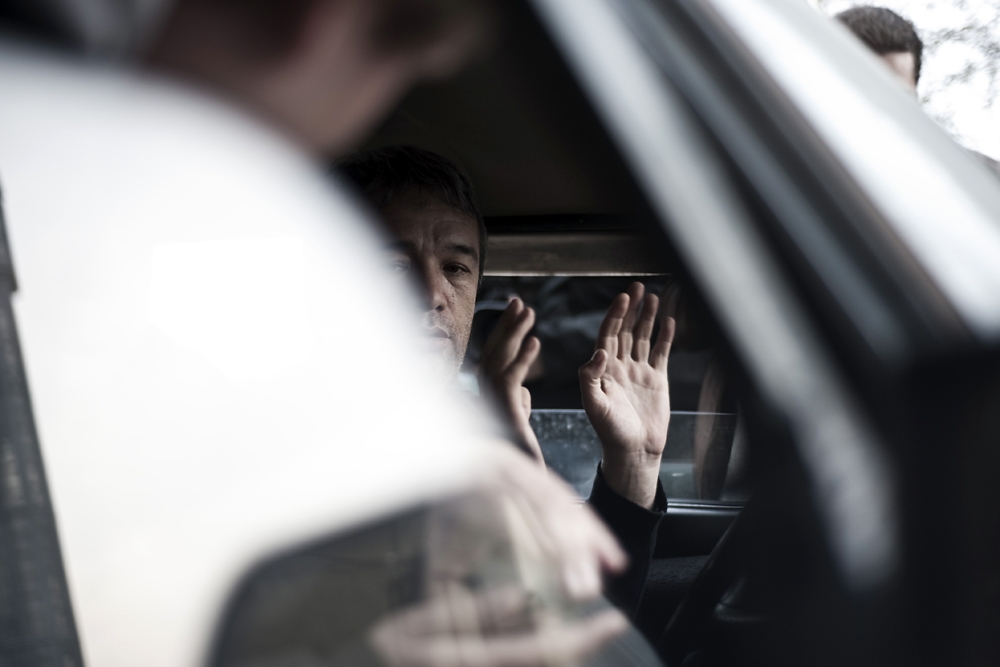 An unregistered rivers from Uzbekistan talks to police at the end of a paid ride. 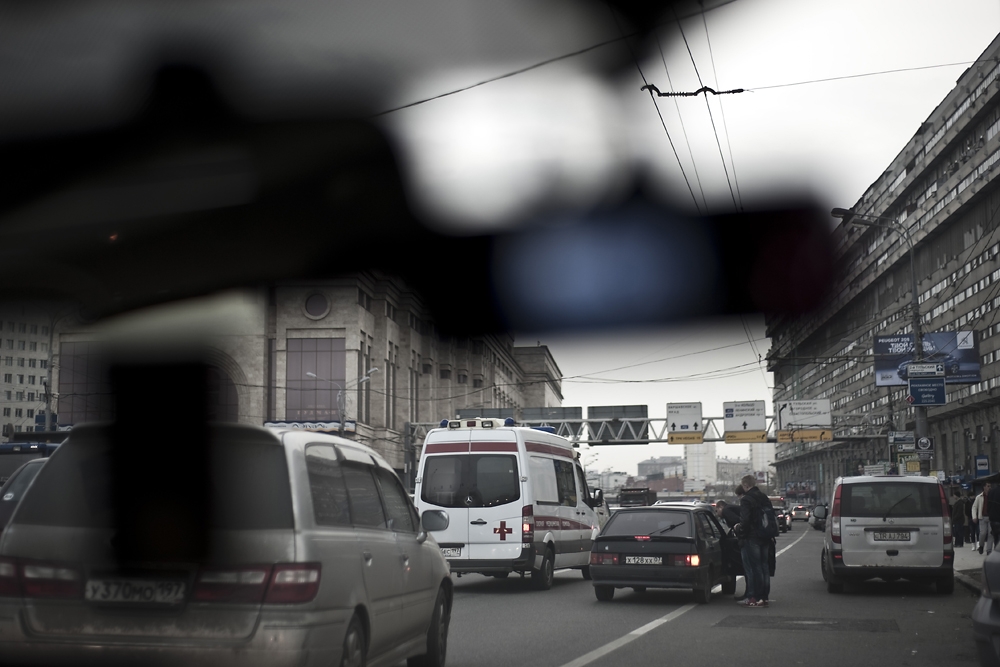 Members of the group negotiate a deal with an unlicensed taxi driver. 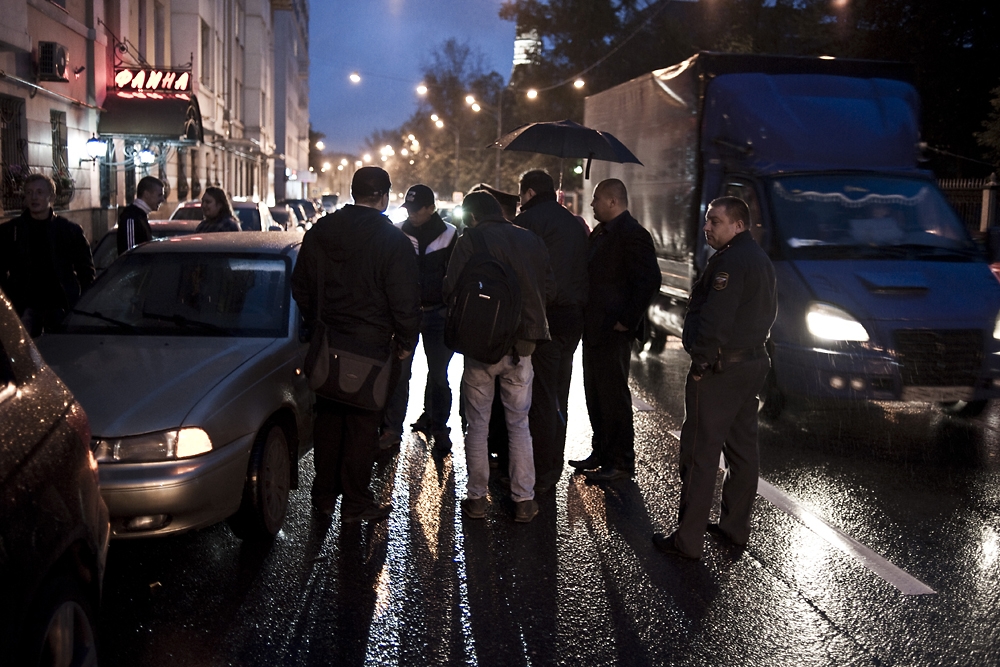 Three policemen and several members of the group question an unlicensed taxi driver from Kyrgyzstan. 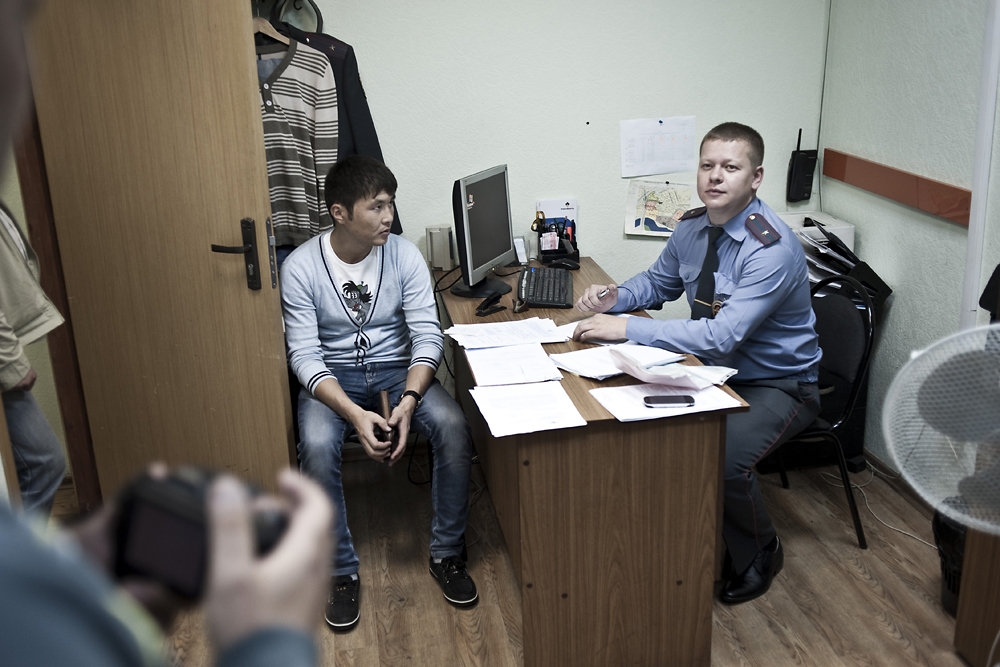 A Kyrgyz migrant is questioned and booked at a Moscow police station for driving an unlicensed taxi.

An unlicensed taxi driver from Azerbaijan smokes a cigarette inside his car while waiting for police to return to talk to him. 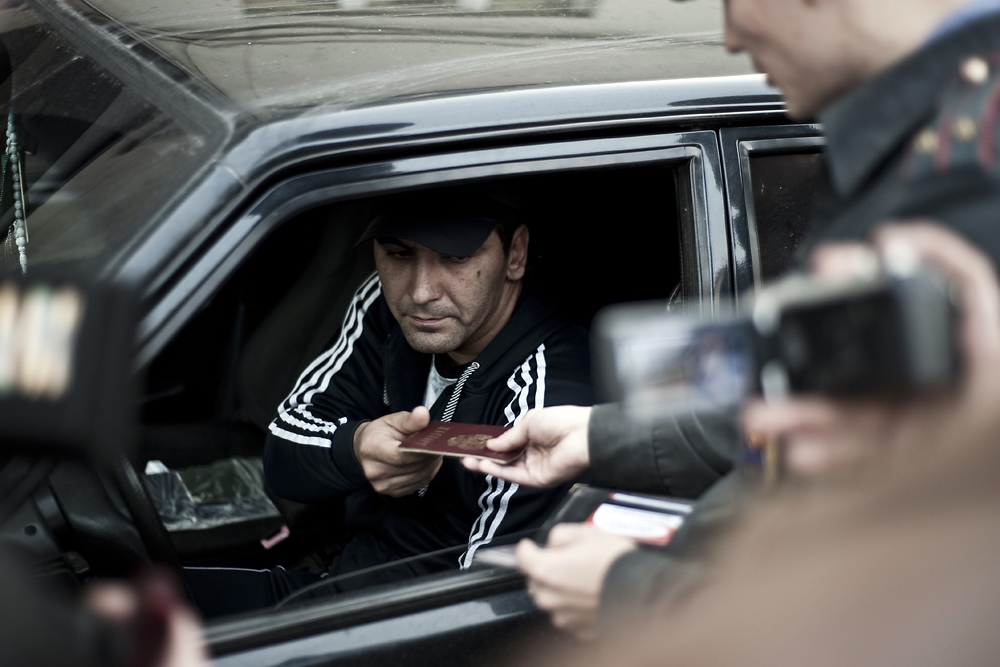 During the operation a Russian citizen from the North Caucasus was detained but then released with a court date. 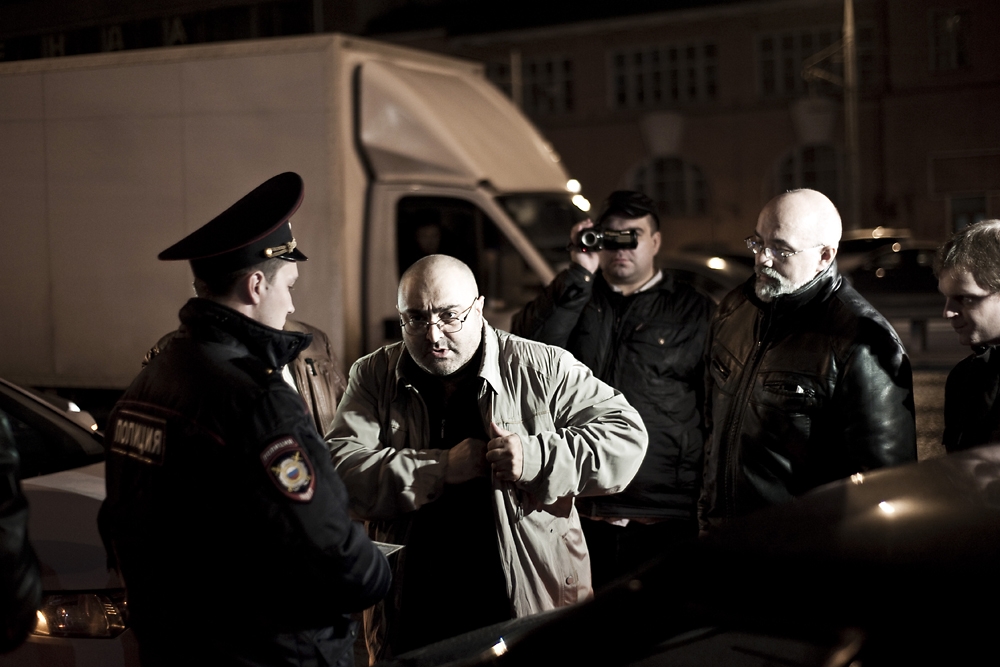 An unlicensed taxi driver reaches for his identification papers after being stopped at the end of his paid fare. 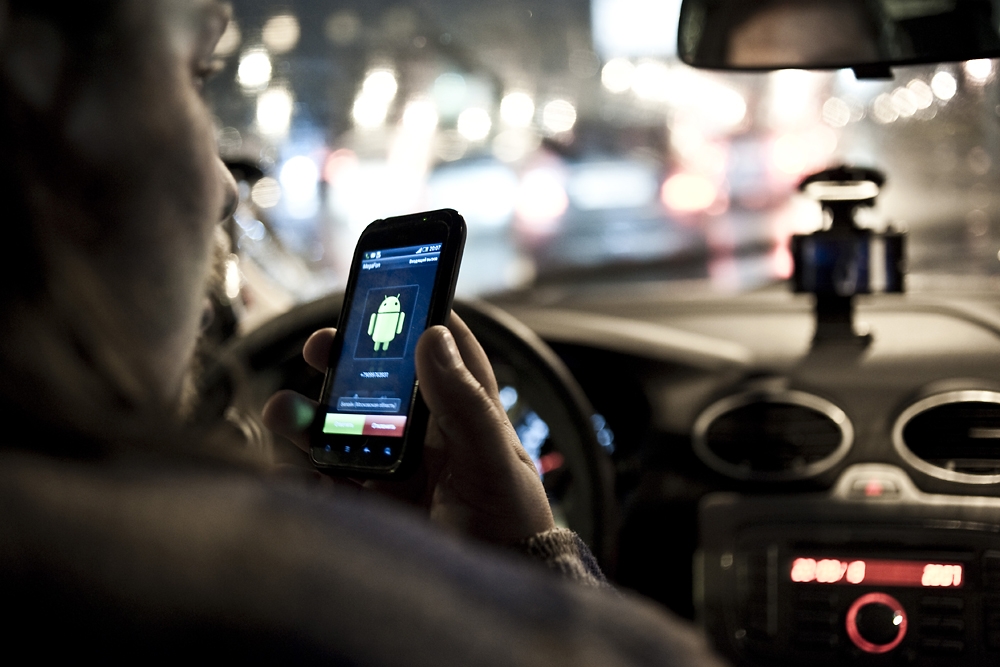 A member of the group follows an unlicensed taxi and phones ahead with details on the car. 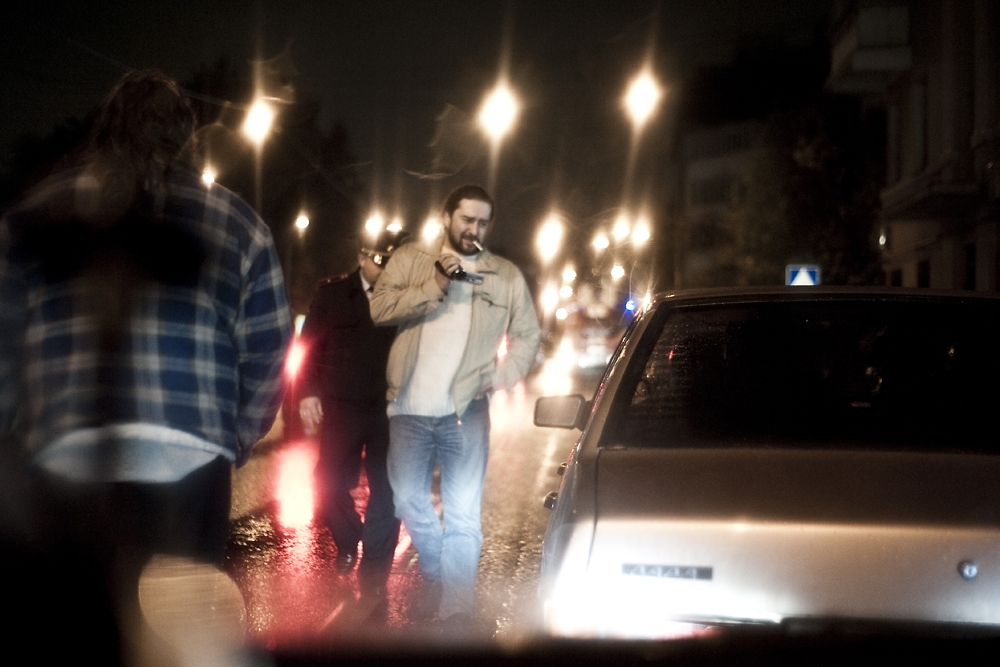 Police and members of the group wait for an unlicensed taxi driver to arrive near the police station.
prev
next

It’s Friday evening on Moscow’s Garden Ring road and Alexander Likhachyov is out to ruin a labor migrant’s night. With the help of two friends, Likhachyov – an athletic Russian in his mid-30s “from a family of taxi drivers and Muscovites” – says he is intent on “leveling the playing field” in a profession he contends that migrants are taking over.

The three say they’re looking for drivers of unlicensed cabs in general. But soon they admit they’re not just looking for any drivers: they are specifically targeting undocumented migrants from Kyrgyzstan, Tajikistan or Uzbekistan, who are theoretically the most vulnerable of possible targets. Their sentiment coincides with a wave of anti-migrant hostility among Russians, who often appear to be taking out pent-up frustrations with the country’s lawlessness on outsiders – most recently during anti-migrant riots in Moscow’s Biryulyovo neighborhood on October 13.

In this particular case, Likhachyov is the bait. He stands on the Garden Ring flagging down cars – in Moscow, as in many post-Soviet cities, drivers will often moonlight as cabbies to earn extra cash. His buddy Roman Podsekin hangs out with some police they’ve enlisted to help. Evgenii Greck waits near a restaurant en route to their destination: a police station in the Yuzhny Port neighborhood.

The first car to stop is a relatively new Ford Focus. The driver appears Slavic. Likhachyov waves him away.

Next, an Asian-looking man in his mid-20s driving a rusty Daewoo Espero pulls up. Likhachyov (your correspondent in tow) climbs in and gives the driver an address, without mentioning that it’s a police station.

Likhachyov asks the driver to pick up Greck. That’s the trap. The driver has now twice offered his services as an unlicensed cab.

During the 10-minute ride, Likhachyov and Greck chitchat with the driver, who, they learn, arrived from Kyrgyzstan five years ago. He works in a print shop during the day. At night, for extra cash, he works as an informal taxi driver.

Greck calls Podsekin at the police station: “Natasha, put on the pelmeni [dumplings]. We’re close.” With that secret password, Podsekin and the cops know their prey is near and what kind of car he’s driving.

When they pull into an alley, Likhachyov pays with banknotes he has marked. Podsekin blocks the driver in with his own car. The cop appears and hauls him away. He’ll either be fined, lose his car, or could even be deported. This being Moscow, he probably could also bribe himself out of the situation; but Podsekin stays with the police to ensure the paperwork is correctly submitted.

Podsekin, Greck and Likhachyov are pleased with themselves. They say they’re motivated to protect legitimate Russian taxi drivers from Central Asians who, they say, don’t pay taxes and undercut them by driving cheaper cars. But it sounds like their anger should be directed at their own government.

Greck says they were inspired to start these vigilante patrols in March, when the Moscow city government passed legislation requiring them to paint their taxis yellow. He says the law made the playing field uneven, as many unlicensed cabs continued to operate. “That costs money. Then we’re forced to get a special tag. More money. Then when we go to sell these cars after a few years, no one wants to buy them at a fair price,” Greck says. “Many legal drivers are thinking about getting out of this line of work or going into the shadows. Their places will be occupied by [Central] Asians. What good is it to be legal? Just more stupid laws.”

“They’re turning us into slaves,” Likhachyov chimes in. “These conditions. I had a few colleagues who died from working so hard. Just fell asleep driving. I wouldn’t agree to work 16-18 hours a day for 500 rubles [$15 a day],” he said, describing the terms some taxi companies offer. “Only migrants agree to these jobs.”