Russia to Build New Home Base for Caspian Flotilla 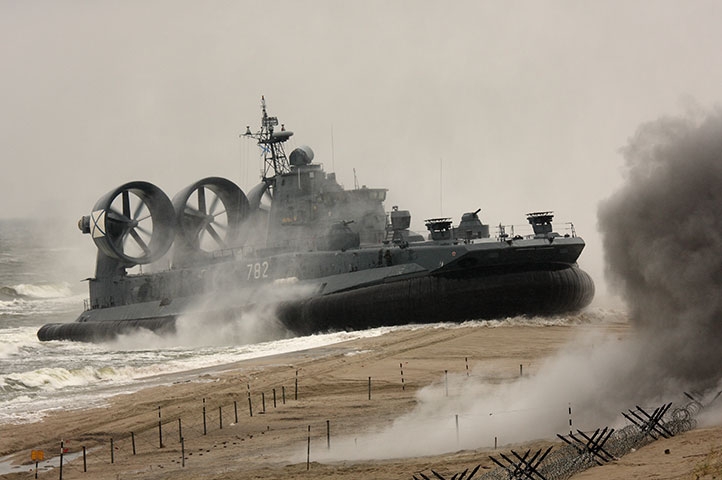 A Russian Zubr-class landing craft taking part in exercises near Kaspiysk, where Russia is planning to build a new home base for its Caspian Flotilla. (photo: mil.ru)

Russia is planning to create a new home base for its Caspian Flotilla, moving it from Astrakhan to Dagestan by 2020. The new base will be one of Russia's most technically advanced naval facilities, Ministry of Defense officials have said.

The new base will be in Kaspiysk, in Dagestan, where a small marine detachment is now located, unnamed MoD sources told the newspaper Izvestiya. Izvestiya said the new facility will be "more advanced than those for the Northern, Baltic, or Black Sea Fleets." (Though not, apparently, the Pacific Fleet, Russia's other major naval division, which is also getting an upgrade.)

The construction will entail improving the harbor, building new docks as well as barracks, ammunition storage facilities, and officers' housing.

Russia has been laid out some ambitious naval modernization plans, but the Caspian has been relatively neglected -- it's the only sea where Russia isn't challenged by the West, but instead by relatively weak and non-hostile neighbors Azerbaijan, Kazakhstan, Turkmenistan, and Iran.

But the Caspian gained some prominence in Russia's strategic vision when it was the site of a series of missile attacks against targets in Syria. This, according to Izvestiya, has earned the sea the nickname "the swimming pool with missiles" among the sailors stationed there.

One Russian analyst, Sergei Mikheev of the Institute for Caspian Cooperation, tied the construction of the new base to European plans to build a pipeline under the sea to ship natural gas from Turkmenistan to Azerbaijan and onward to Europe. Russia has strongly opposed the project.

Meanwhile, there have been signs that tension on the Caspian has been decreasing. Earlier this year Iran made its first-ever naval visit to Kazakhstan, and this summer took part for the first time in the "Caspian Cup," a Russia-organized naval sporting competition that this year was hosted in Baku.

And last week, Kazakhstan's navy paid Iran a return visit, the first time it had made a formal port call there. Russia, it should be noted, has been carrying out far more of these kinds of visits than any of the other countries.

As it happens, the news of the new base came out the same day that Russian President Vladimir Putin paid a rare visit to Turkmenistan, on the other side of the Caspian. Turkmenistan has been building up its own navy, but has stayed out of these sorts of mutual cooperation activities. It's not clear if naval issues were on the agenda for Putin's visit, but you can be sure that the trans-Caspian pipeline was.