Some were sent to the Sea of Azov; others to the Mediterranean. It remains to be seen if the redeployments are permanent. 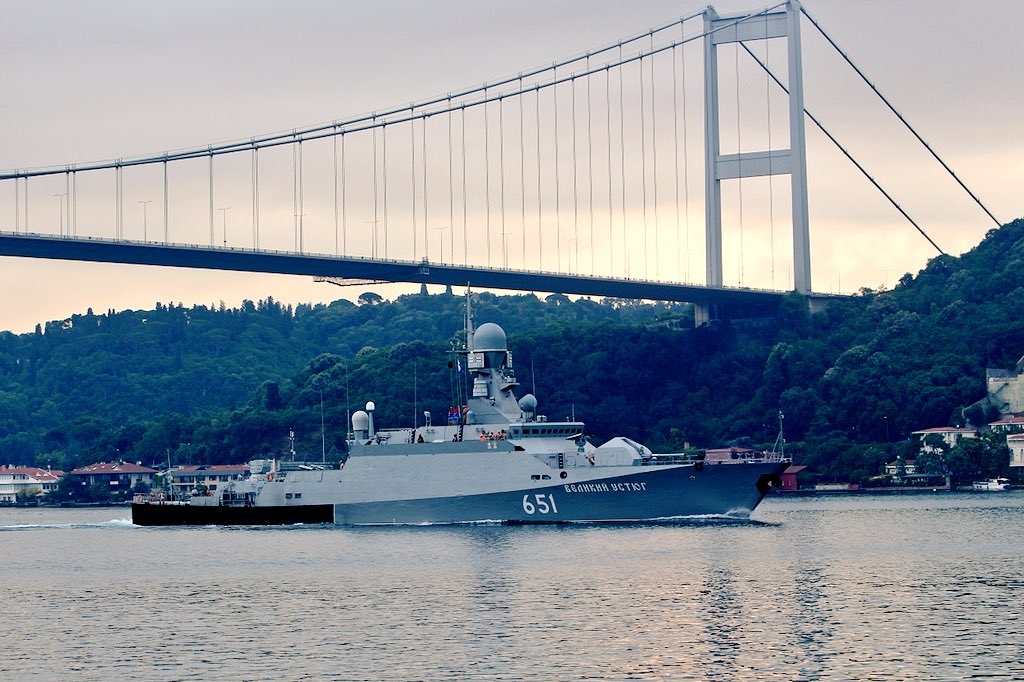 The Russian corvette Veliky Ustyug, erstwhile of the Caspian Flotilla, passes through the Bosphorus in Istanbul en route to the Mediterranean. (photo: Yörük Işık)

Russia has transferred at least five warships out of the Caspian Sea into European waters in response to threats in that theater, at least temporarily leaving Russia without a substantial portion of its Caspian firepower.

There have been two separate redeployments over the past month. In the first, Russia sent three missile ships into the Sea of Azov, between Ukraine and Russia, along with two auxiliary vessels. In the second, it sent two corvettes into the Sea of Azov and then onward to the Black Sea and the Mediterranean.

The former deployment appears to be related to Russia's ongoing conflict with Ukraine: the Russian military blog BMPD and other observers have linked it to the opening of the new bridge across the Kerch Straits connecting Crimea to Russia. “It appears very likely that they are not preparing to return to the Caspian,” wrote analyst Sergey Ishchenko on the website Svobodnaya Pressa.

The latter is related to Russia's operations in Syria, the state news website RT reported. After that, the ships could be heading to join the Baltic Fleet, BMPD speculated. “It's not yet clear whether they will return to the Caspian Sea upon the completion of their military service in the Mediterranean,” BMPD wrote.

The Caspian is a closed sea, but a series of canals and the Volga and Don rivers connect it to the Sea of Azov, allowing Russia to move ships in and out.

The two corvettes are two of the Caspian Flotilla's most powerful ships, having launched some of the Kalibr missiles that Russia used to strike targets in Syria in 2015. (The two ships now off the Syrian coast are the Grad Sviyazhsk and Veliky Ustyug. Another corvette of the same class, the Uglich, remains on the Caspian, as do two frigates, the Tatarstan and Dagestan.)

The redeployments take place as the Caspian Flotilla is getting ready to move from its current home base in Astrakhan to Kaspiysk, in Dagestan. Russian officials have vowed that the new base at Kaspiysk will be one of Russia's most technologically advanced naval bases.

At the same time, tension appears to be diminishing on the Caspian, with many of the other littoral states – Azerbaijan, Iran, Kazakhstan, and Turkmenistan – cooperating recently to an unprecedented degree. The five littoral states reportedly recently agreed on a long-awaited convention delimiting the sea, the foundation of much of the strategic uncertainty there, and so Moscow may be calculating that its limited resources are not best spent on the Caspian. In any case, the ships could always go back the way they came.