Russia & Turkey: Putin and Erdoğan Make Up in Istanbul, To a Point 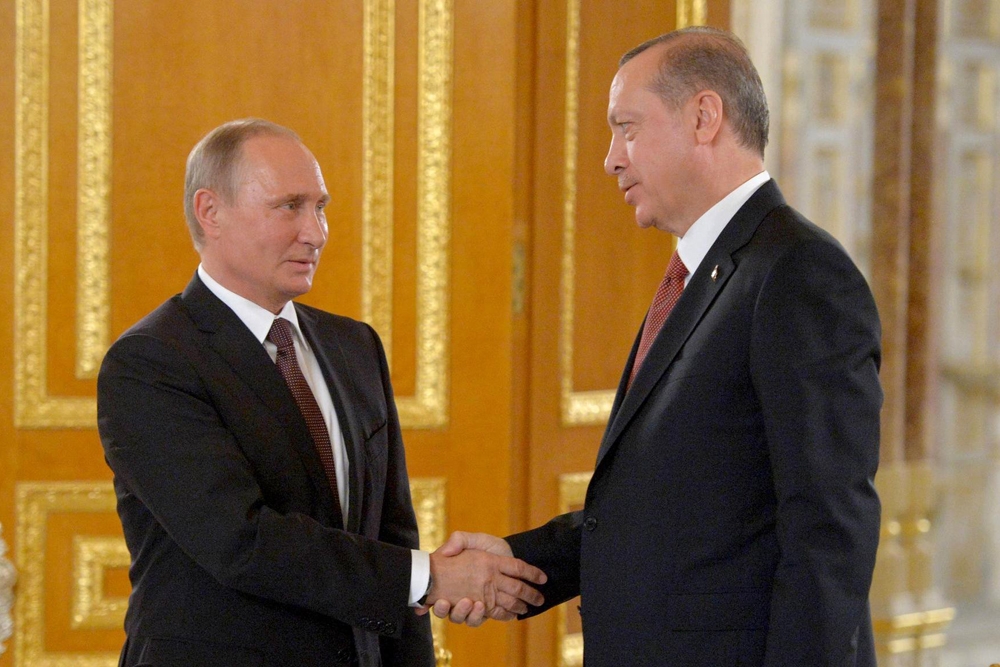 Russian President Vladimir Putin and his Turkish counterpart Recep Tayyip Erdoğan are keen to demonstrate their political friendship is back on track. But behind the smiles and shared jokes during their October 10 meeting in Istanbul, the rivalries that caused relations to nosedive remain. (Photo: Russian Presidential Press Service)

Russian President Vladimir Putin and his Turkish counterpart Recep Tayyip Erdoğan are keen to demonstrate their political friendship is back on track. But behind the smiles and shared jokes during their October 10 meeting in Istanbul, the rivalries that caused relations to nosedive remain.

Putin used Istanbul’s hosting of the World Energy Congress as the venue for his first visit to Turkey since Turkish jets shot down a Russian bomber operating from Syria last November. Prior to the shootdown incident, the two countries had managed to compartmentalize their support of rival sides in the Syrian civil war, and had managed to expand economic and political relations.

After a four-hour meeting in Istanbul’s ornate Yıldız Palace, the two leaders announced that they were ready to put the shootdown behind them, and try again. “Today has been a full day with President Putin of discussing Russia-Turkish relations,” Erdoğan declared, speaking at a joint news conference. “I have full confidence that the normalization of Turkish-Russian ties will continue at a fast pace.”

The most visible sign of robust trade ties is the $11-billon Turkish Stream gas pipeline. The 900-kilometer pipeline circumventing Ukraine will deliver gas to Turkey under the Black Sea and, potentially, onward to European markets. Putin announced the project in December 2014 during a state visit to Ankara. At the time, he raised eyebrows around the world by describing Turkey as a “strategic partner.”

The pipeline project was frozen after the Russian jet downing, but on October 10, the Russian and Turkish energy ministers signed an agreement to build it.

“I don’t think the Russians can find a better partner in the region, a better market for their goods, for their tourists,” said Murat Bilhan, deputy chair of the Ankara-based Turkish Asian Center for Strategic Studies. “For their energy source it’s the shortest, most economic, and safest route. … Fluctuations in Turkish-U.S. relations have forced Turkey to find new friends or at least reconstruct its relations with its other neighbors.”

Putin and Erdoğan exhibited powerful personal chemistry in Istanbul, and both are at ease dismissing criticism from Western countries over human rights. In what appeared to be a careful piece of diplomatic choreography, during the energy summit Erdoğan posed for photos flanked by Putin and another bogeyman of Washington’s, Venezuela President Nicolas Maduro.

Despite the outward signs of friendship, powerful and conflicting forces continue to influence Russian-Turkish relations, analysts caution. “It’s a misnomer to characterize this as a rapprochement,” said Sinan Ülgen, a visiting scholar at the Brussels-based think tank Carnegie Europe. Ulgen pointed out the
differences over the Syrian civil war that culminated in the downing of the Russian bomber remain unaddressed.

“Many of the opposition groups that Turkey supports, along with Saudi [Arabia] and Qatar, are viewed as terrorist entities by Russia and they have been bombed by Russian forces. That is a source of tension that remains today,” Ulgen said.

In September, Erdoğan rolled out the red carpet – although in Turkey, it is turquoise – for the Saudi Crown Prince Mohammed bin Nayef bin Abdul Aziz, as Turkey continues to build ties with countries with goals contrary to Russia’s in Syria. The Saudi visit was the latest in intensifying diplomatic traffic between the countries. Ankara has again been calling for the immediate removal of Syrian President Bashar Al Assad, a demand that walks back a gesture to Moscow in which Ankara suggested the Syrian dictator could play a role in a transition of power.

The apparent flip-flop is fueling questions about the coherence of Turkish foreign policy. “You cannot, as a juggler, juggle with six balls, and keep all six balls in the air, all the time,” said former Turkish diplomat Aydın Selcen. “You cannot have your way with Russia, with Iran, with Damascus, with Baghdad, with Saudi Arabia, with the United States.”

But for now Ankara continues to juggle with some success. “We should be clear that it is the normalization of the relationship with Russia that enabled Turkey to undertake the Syrian cross-border military operation,” Ulgen noted. Ulgen was referring to Operation Euphrates Shield, which Turkey launched in August. The military move was ostensibly designed to target the Islamic State and to thwart Syrian Kurdish efforts to create an independent state, while also positioning Ankara as a player in Syria.
The intervention remains subject to Moscow’s whims, however. “The scale of Turkey’s military
endeavor may expand in future weeks,” said Ulgen, and “that presents a challenge because that will require a degree of acceptance by Russia, and therefore this is becoming a more challenging situation
given the regional dynamics.”

Rumors abound in Turkey of a deal struck between Ankara, Damascus and Moscow. “When Turkish forces entered [the Syrian town of] Jarabulus, Deriya, a stronghold of the rebellion near Damascus, changed hands, leading some to believe there was agreement between Ankara and Damascus, that for Turkish forces entering Syria in exchange for rebels leaving Deriya.” Erdoğan has also avoided joining the
outpouring of western-led condemnation of Russian forces’ recent bombing of Aleppo.

During his Istanbul visit, Putin seemed intent on adding to speculation on greater coordination in Syria. “Together with the Turkish president, we agreed to do everything to support de Mistura’s initiative on the
withdrawal of military units, which refuse to lay down their arms, from Aleppo in order to end violence,” Putin said, referring to the United Nations’ Syria envoy Staffan de Mistura. That comment will likely unnerve rebel forces dependent on Turkey as a supply route.

But talk of a new regional strategic relationship between Ankara and Moscow could well be premature. Both sides appear aware of the limitations and risks, making bilateral ties, for now at least, more transactional than strategic.

On Russia’s part, Putin is only slowly easing the painful economic sanctions on Turkey. Meanwhile, when Erdoğan addressed the Energy Congress, he reaffirmed his country’s commitment to continue to reduce its dependence on Russian energy, while highlighting the potential of Eastern Mediterranean gas fields as an alternative. On October 13, Israel’s energy minister Yuval Steinitz is scheduled to visit Turkey for the first time in six years.

It seems clear both Putin and Erdoğan are keeping their powder dry.