Russia & Turkey: Putin Makes a Pipeline Play, but Will It Pay? 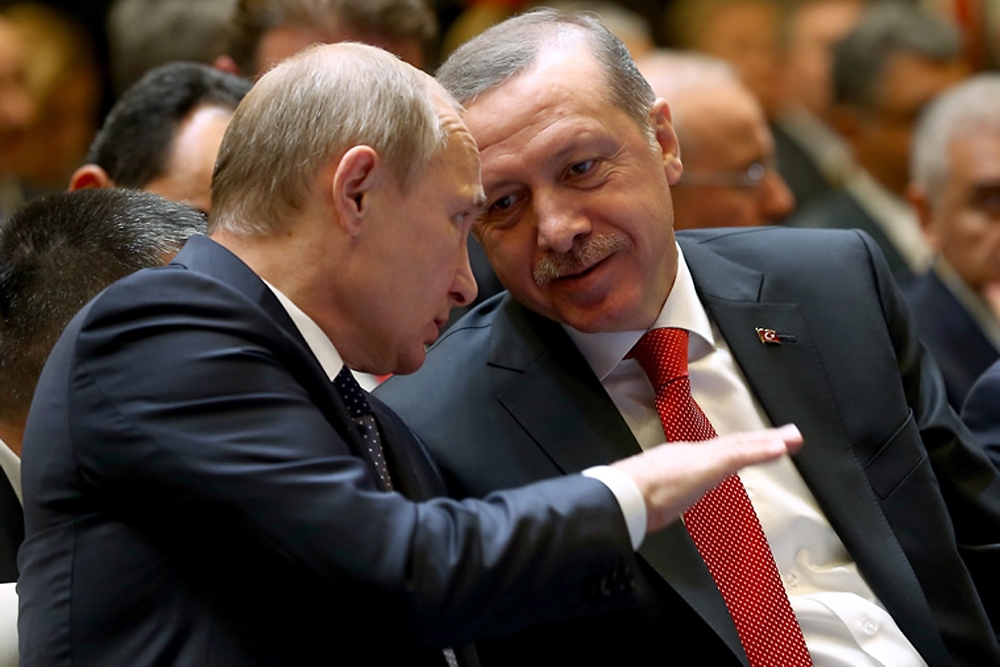 Russian President Vladimir Putin and Turkish President Recep Tayyip Erdoğan talk to each other before a joint news conference on Dec. 1 in Ankara, where they announced a potential new pipeline to be used for delivering Russian natural gas to European markets. (Photo: Turkish Presidential Press Service)

Energy-poor Turkey stands to benefit from Moscow’s surprise decision to drop the $45-billion South Stream natural gas pipeline project, analysts say. At the same time, it raises questions about whether Turkey will become a pawn in the broader energy contest between Russia and the EU.

Ankara has long been keen to wean itself off Russian energy, which currently accounts for an estimated 57 percent of its gas needs, according to the 2014 BP Statistical Review of World Energy. Both the Turkish government and the European Union had seen gas imports from Azerbaijan, a cultural cousin and close ally of Ankara’s, via the Trans-Anatolian Pipeline (TANAP) as the answer to decreasing their level of energy dependency on the Kremlin.

But Russian President Vladimir Putin has other ideas. During a visit to Turkey on December 1, he described Turkey as a “strategic partner” and proposed a new, 63-billion-cubic-meter-per-year gas pipeline running under the Black Sea from Russia via Turkey to the Greek border, which would serve as a forwarding point to Europe.

The Russian leader pledged a 6 percent discount on the price of the 14 bcm of gas available for sale annually to Turkey from the pipeline.

Some Turkish analysts see that as a strategic sweetener with long-term consequences. The proposed new pipeline would increase Turkey’s gas dependency on Russia, one of its largest trade partners, to over 75 percent, and would place the country more firmly inside the Russian energy camp.

Pressed by European and American economic sanctions over Russia’s actions concerning Ukraine, Moscow appears to be opting for a traditional strategy toward the West – divide and conquer.

“The Russians are very good chess players at the moment,” commented Emre Işeri, an associate professor of international relations at Yaşar University in the Aegean city of Izmir. “They are trying to find ways to put pressure on EU members, because Austria is very keen to get South-Stream gas.”

“There is desire on [the] Russian side to establish [a] closer relationship with Turkey and eventually leverage energy ties to pull Turkey away from Europe and closest to the Russian position,” observed Sinan Ülgen, a visiting specialist in Turkish foreign affairs at the Brussels-based Carnegie Europe think-tank. “That is definitely a motivation for cancelling South Stream and for directing huge flows of gas to Turkey’s direction.”

As is the case with most blockbuster energy deals, the devil could be in the details. Turkey strives to turn itself into an energy hub, http://www.eurasianet.org/node/69366 not just serve as a transit country, but, until now, Moscow has never allowed Ankara to resell its gas, Işeri noted.

“Being an energy hub means going beyond [a] transit state, so it will not be just [a] bridge, but also distribute gas and make money out of these deals,” Işeri said.

The price of the Russian gas also remains a potential stumbling block. While gas prices are usually pegged to oil, each deal is unique. With oil prices falling by nearly a third in the last three months, Ankara insiders were looking for a discount of around 15 percent, rather than 6 percent, according to local media reports.

The Russian president has indicated a further cut could be in the offing, but skepticism still runs strong.

Turkey’s Energy Minister Taner Yıldız on December 8 was forced to defend the project, saying it was “realizable,” although he added that many details remain outstanding.

So far, only a memorandum of understanding has been signed between Moscow and Ankara.

The deal has caught Brussels’ attention. Yet, so far, EU officials have not publically commented on the Russian-Turkish initiative. On December 8, just a week after Putin’s visit, the EU’s foreign policy chief, Federica Mogherini, came to Ankara to underline Turkey’s strategic importance for Brussels.

In a December 5 interview with RFE/RL, EU Energy Commissioner Maros Sefcovic also claimed that South Stream could be revived if Moscow agreed to abide by EU energy rules.

Yet, Moscow is busy making other moves, too.

While the EU-backed TANAP has long been seen as the best bet to supply Turkey and, ultimately, Europe, with non-Russian gas, “only limited” Azerbaijani gas currently is available, said Iseri. A complicating factor is the recent nose-dive in EU-Azerbaijani relations.

Adding Iraq and Turkmenistan to the mix would “make a difference,” he continued, but “we know Russia [is] putting a lot of pressure on Turkmenistan not to supply TANAP.”

Azerbaijani officials do not seem concerned about the latest turn of events. An official at the State Oil Company of the Azerbaijani Republic was quoted by the media outlet Natural Gas Europe that South Stream was not seen as a competitor, and that its replacement also “wouldn’t change our approach.”

For all the talk of a Russian-Turkish pipeline partnership, a rising geopolitical rivalry exists between Moscow and Ankara that could hamper deal-making, cautioned diplomatic columnist Semih İdiz of the Taraf newspaper.

“The countries disagree very fundamentally on Syria. In fact, they’ve exchanged barbs over this. … They have [a] difference of opinion vis-à-vis Ukraine, especially Crimea, where there is a Tatar minority. These are relatives of [the] Turks,” İdiz said. “And the two countries do not agree on the Cyprus issue because Moscow is known to stand behind the Greek Cypriot administration."

The recent attack by militants in Grozny, capital of the Russian republic of Chechnya, served as a reminder of those differences. Chechnya’s strongly pro-Kremlin leader, Ramzan Kadyrov, accused Turkey of harboring the alleged architect of the attack, and urged Russian law enforcement to push for his extradition.

Such matters may not necessarily undermine the new Putin pipeline initiative. Both given to authoritarian tendencies and a robust disdain for the West, Putin and Erdoğan share a “strong personal chemistry,” which has helped them manage regional differences in the past, İdiz noted.