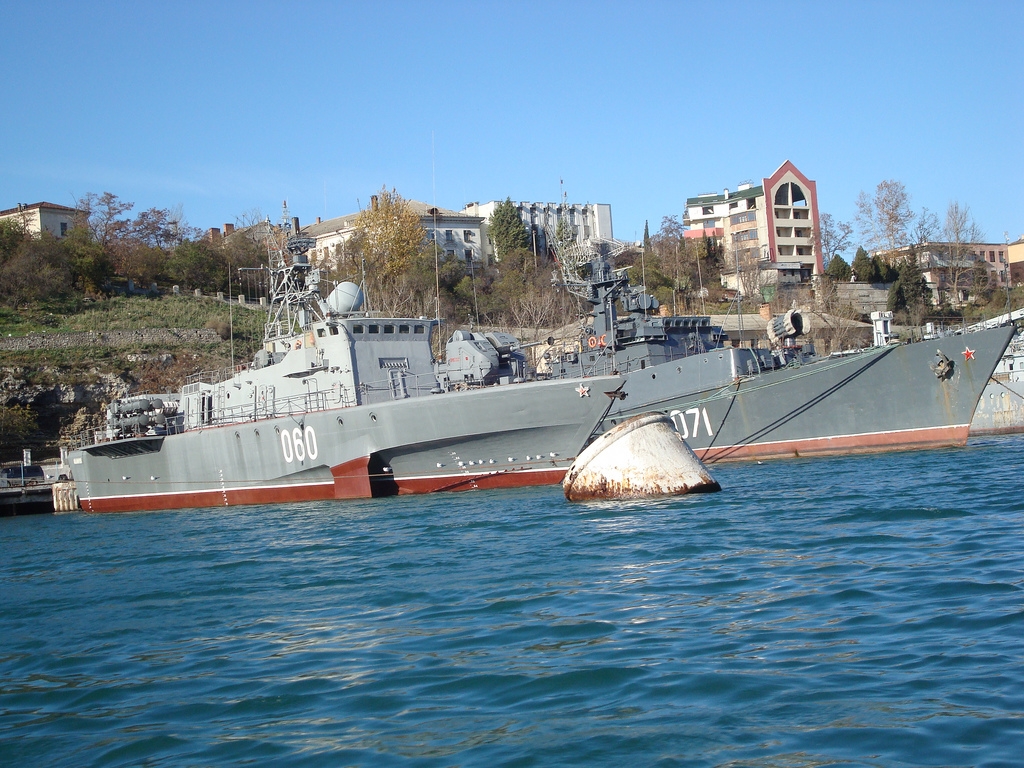 If Russia gets its way, these Russian Black Sea Fleet ships in Sevastopol could soon be joined by more, newer ships. (photo: The Bug Pit)

The agreement, signed by Presidents Vladimir Putin and Viktor Yanukovich on Tuesday, includes provisions for "development of the social-economic sphere of Sevastopol," the Crimean city where Russia's Black Sea Fleet is based. It also provides for the "resolution of problems of taxation" and customs control for equipment for the Russian forces aimed at "limiting border, customs, and other types of government control.

But probably the most important provision related to the Black Sea Fleet is that the two sides agree to "start negotiations on preparation of a bilateral agreement on replacement of weaponry and military equipment" of the fleet. This has been the most contentious issue between the two sides, whether Russia will be allowed improve the level of equipment for the fleet or simply replace old ships with newer versions of the same class. Russia has wanted to expand the fleet, while Ukraine wants Russia only to be able to replace like with like. Although there aren't specifics (at least in the version of the agreement publicly released), Russian military expert Dmitry Gorenburg told The Bug Pit that just the agreement to start discussing replacement of equipment is "potentially very significant" and that an agreement "would probably create an environment where subsequent presidents wouldn't be able to prevent replacement."

These are issues that have been discussed by Ukraine and Russia for some time. And as the two sides have been discussing a bailout package to help Ukraine's economy (and possibly to help resolve the political crisis in Kiev), the possibility of including provisions related to the fleet had already mooted. Last week an unnamed Russian official told reporters: "Maybe if they suggest better terms for our fleet, why not" sign a bailout deal for Ukraine.

Meanwhile, Ukraine's nationalist politicians have been warning that Russia might be trying to sneak in an expansion of the fleet into the ongoing negotiations, and even warned that if the situation got out of hand that the fleet would take control of the Crimean peninsula.

During a speech at the meeting where the agreement was reached, Putin also discussed the fleet. Though he didn't mention anything about expansion, he seemed to suggest that Ukrainian companies could contribute more to the maintenance of the fleet:

Russia and Ukraine can work together more closely on the international stage and expand policy coordination on current global issues, above all regional security, in which Russia’s Black Sea Fleet, which is based at Sevastopol, plays a key part.

We need to renew all-round cooperation in military and military-technical affairs. I discussed this in depth with President Yanukovych. As our countries build closer economic and political links, we are ready to look at the possibility of drawing on the Ukrainian economy’s capability for the needs of Russia’s armed forces, including in areas such as carrying out repairs and so on. The Russian and Ukrainian defence ministries have already drafted specific proposals in this area.

Anyway, this will be one to watch.