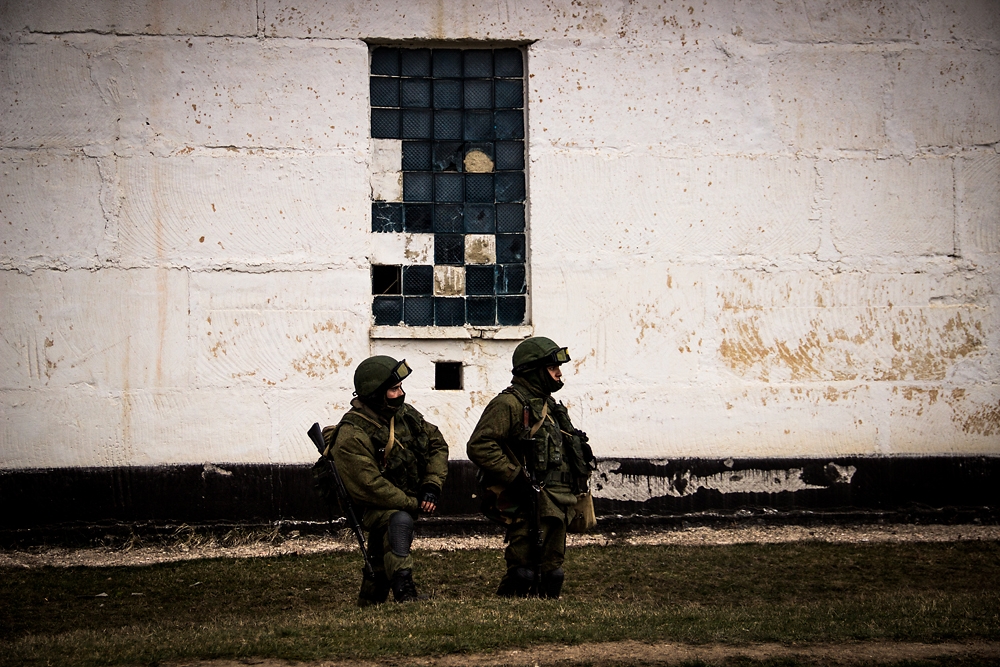 Military and political events in Ukraine may be rattling the nerves in Central Asia. (Photo: Noah Sneider)

The Russia-Ukraine crisis is having a profoundly unsettling effect on authoritarian-minded governments in Central Asia. On the one hand, they are keen to keep the forces unleashed by the Euromaidan movement at bay; on the other, they appear unnerved by the Kremlin’s power play.

State-controlled media outlets in Central Asian states are reticent when it comes to covering developments in Kyiv, Crimea and elsewhere in Ukraine. The parallels between the ousted and allegedly corrupt president of Ukraine, Viktor Yanukovych, and leading members of Central Asian elites are obvious to many in the region, so it’s not surprising that the Euromaidan Revolution has received little play in Central Asia’s press.

When it comes to the Russian occupation of Crimea, none of Central Asia’s leaders have commented officially. Kazakhstan and Uzbekistan have released short statements, both without mentioning Russia. Uzbekistan’s Foreign Ministry said on March 4 that it is concerned about the “sovereignty and territorial integrity” of Ukraine. Like Crimea, which Russian forces occupied on March 1 under the pretext of “protecting” the region’s large Russian-speaking population, the five Central Asian states are home to sizable communities of ethnic Russians. In Turkmenistan, for example, Russians have faced widespread discrimination since independence in 1991. Thus, a pretext similar to that which Russia used for its Crimea gambit could be applied to the gas-rich Central Asian dictatorship at some point in the future. In Kazakhstan, there is a large Russian population in the north of the country.

Conspicuous silence in public does not mean that Central Asian leaders don’t have an opinion on Russia’s actions in Ukraine. At a time when the Euromaidan Revolution gained momentum in February, Russian nationalist leader Vladimir Zhirinovsky sparked outrage in Central Asian capitals by suggesting Russia should absorb Central Asia. Now that Russian forces are firmly ensconced in Crimea, Central Asian leaders will likely have a hard time trusting the Kremlin on issues relating to economic and political sovereignty.

Writing on March 3 for Gundogar.org, veteran Central Asia-watcher Arkady Dubnov said recent developments in Ukraine could inflict irreparable damage to Moscow’s image in Central Asia. Anyone in the region opposed to closer relations with Russia now has a powerful argument, Dubnov wrote: “Which government leader in the region will risk his political future trying to convince his electorate that the most innocent Russian-led economic integration alliance doesn't threaten national sovereignty?”

Kazakhstan’s president, Nursultan Nazarbayev, will soon provide a way to gauge the Central Asian reaction. Nazarbayev is due to visit Moscow March 10-11 for talks with Russian President Vladimir Putin that are supposed to cover “topical international problems.” It seems conceivable that the image-conscious Nazarbayev may find a way to put off visiting Moscow. If the trip proceeds as scheduled, political analysts will scrutinize Nazarbayev’s body language and statements for clues on whether his stance toward Russia is changing or not.

Bishkek-based analyst Marat Kazakpaev downplays the possibility that Russia would resort to naked aggression to occupy parts of Central Asia. If Russia wants to have its way in the region, “it will use its geopolitical clout, but not its military,” he said.

At the same time, the Crimean situation shows that Russian decision-making isn’t always guided by 21st century logic. Putin claimed on March 4 that pro-Russian troops in Crimea were only protecting Russian military facilities there. Such a statement can only be unsettling to leaders of other states that host Russian strategic facilities. Several analysts have pointed out the parallels between Russia’s naval base in the Crimean city of Sevastopol and Russia’s largest land base abroad, the 7,000-strong 201st Motorized Rifle Division in Tajikistan. Russia also has a base in Kyrgyzstan and training facilities, as well as the Baikonur Cosmodrome, in Kazakhstan.

Despite the shock created by Russia’s move into Crimea, Kazakpaev believes Central Asian leaders remain more worried about insulating themselves from Euromaidan. “They [Central Asian leaders] are afraid the revolution could be exported,” Kazakpaev said. “Heads of states, especially authoritarian states like Kazakhstan, [Islam] Karimov’s Uzbekistan, and [Tajikistan’s] Rakhmon, who have all been in power for a long time, they’re worried about revolution.”

State media coverage certainly reflects that concern. From Kazakhstan to Tajikistan, the little coverage that has appeared is mainly devoted to discrediting the Euromaidan Revolution. Such reports push the line that right-wing elements – or the eternal post-Soviet bogeymen, “outside forces” – have unleashed chaos.

In Kazakhstan, state media outlets have been largely quiet on the invasion, but private media has covered developments much more widely, with some supporting the Kremlin’s tough line and others challenging it. Always fearful of civic unrest, Kazakhstani police moved to break up a small rally outside the Russian Embassy in Astana on March 3, detaining activist Makhambet Abzhan for unfurling a banner that referenced Russian invasions in the South Caucasus: “Yesterday Abkhazia, Ossetia; today Crimea; tomorrow north Kazakhstan!”

In Kyrgyzstan, which has the most vibrant media climate and civil society in the region, much of the reaction this week has focused on the rapidly plunging som, which has closely shadowed the plummeting ruble thanks to the Kyrgyz currency’s dependence on migrant remittances and extensive trade with Russia. On March 3, some currency traders in Bishkek reportedly refused to sell dollars as the som slipped to record lows, sinking in some places by 15 percent on news of the occupation, and its negative effects on the Russian economy. Still, Kyrgyz state news is restrained, mentioning Ukraine on its March 3 evening news program only once in the context of the som devaluation.

The most repressive dictatorships in the region, Turkmenistan and Uzbekistan, have seen almost no reporting about the Crimea crisis. Several of Uzbekistan’s tightly controlled newspapers did reprint Russian reports on some military maneuvers, but the Uzbek press has omitted accounts about Moscow’s insistence it is protecting Crimea’s Russian-speaking population, as well as other justifications for Russia’s military operation.

In authoritarian Tajikistan coverage also has been muted: neither the president nor the Foreign Ministry have released statements on events in Ukraine; state media has limited its coverage to warnings about the dangers of protests. But independent news agencies have quoted several opposition leaders saying that a Kyiv-style scenario is possible in Dushanbe due to the widespread social inequality under strongman Imomali Rakhmon, who has been in office since 1992. Nuriddin Karshibaev, the head of the National Association of Independent Media of Tajikistan, expects heightened pressure on opposition leaders in the wake of the Euromaidan Revolution.

"The events in Ukraine have raised concern among the governments of post-Soviet countries, in particular in the states of Central Asia. Regrettably, instead of learning lessons from Euromaidan and correcting their internal policies to improve living conditions, they twist the screws even tighter persecuting dissidents and eradicating pluralism,” Karshibaev told EurasiaNet.org.