Russia: What Interior Ministry Reform Means for the Migration and Drug Control Services 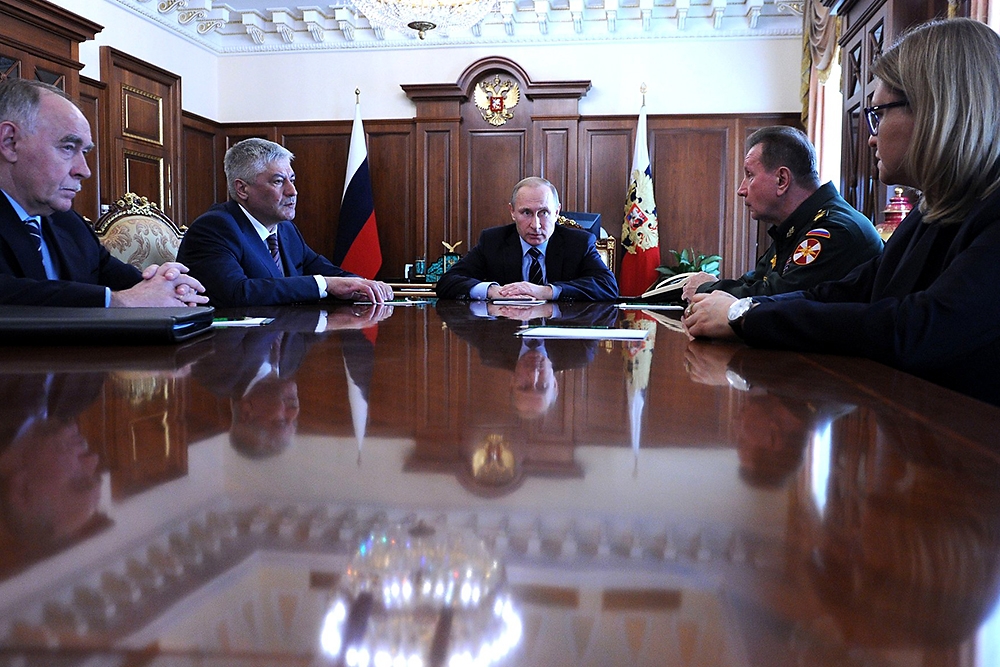 In its usual top-down fashion, the Russian government recently merged the Federal Drug Control Service and the Federal Migration Service into the Ministry of Internal Affairs.

Perhaps the most alarming point of all the Interior Ministry changes is the creation of the National Guard, a specialized armed force that will operate under the command of President Vladimir Putin’s former bodyguard and report to the president. The BBC reports that the National Guard is ostensibly designed to combat terrorism and organized crime, but presidential spokesperson Dmitry Peskov also mentioned that it could be used to “maintain public order.” This could prove especially useful to the regime in influencing the outcome of parliamentary elections this autumn.

While outside attention has understandably focused on the creation of the National Guard and its potential ramifications, the absorption of the Drug Control and Migration Services by the Ministry of Internal Affairs is also significant. It is not the first time that these services have been reshuffled; Putin has separated and merged these agencies in the past. Anatoly Kucherena, chair of the Interior Ministry’s Public Council, indicated that the latest move is meant to make the operations of these agencies more efficient.

But the real question is: will the reforms address in meaningful ways the deepening social challenges associated with labor migration and widespread narcotics use in Russia? Probably not.

Russia right now is grappling with a burgeoning addiction crisis, with an estimated three million citizens currently addicted to drugs; millions more are estimated to be abusing alcohol. Ella Paneyakh, a lecturer at the Institute for the Rule of Law at European University of St. Petersburg, wrote in Slon that under the Interior Ministry, despite clear problems associated with authorities’ reliance on a criminalizing approach to drug use, the Drug Control Service is unlikely to undergo reforms.

Current policies seem to be aimed more at containing the drug problem in Russia, rather than actually solving it. According to TalkingDrugs, the Russian government continues to refuse to reconsider its ban on opioid substitution therapy and opposes needle exchange programs, even though the number of HIV cases is growing at an alarming rate. By moving the Drug Control Service to the country’s main policing organization, the Russian government is sending the signal that it will disregard alternative therapies and continue on the current path of conviction and punishment for drug users.

When it comes to the migration issue, there are numerous reasons for concern about folding the Migration Service into the Ministry of Internal Affairs. According to a report published by Gazeta.Ru, the Migration Service is set to undergo a troubling 30 percent reduction in personnel. This means there will be fewer resources devoted to establishing viable and efficient migration mechanisms.

In January 2015, the Russian government adopted several changes to the existing migration law, including the introduction of a new work authorization document and a required comprehensive examination on Russian language, history, and law. To receive work authorization, migrants must collect several documents, including examination certificates and medical clearance, within 30 days. The time it takes to collect and submit these documents often exceeds the allotted timeframe, leaving many migrants in legal limbo. Additional delays and problems due to staff cuts seem likely, given the challenges associated with these expanded requirements.

The Migration Service move is consistent with a government pattern of heightened emphasis on surveillance. In March, the Interior Ministry unveiled plans to purchase surveillance equipment for mass events. While this news may be driven mostly by government concern about the possible increase in domestic opposition to its policies, it could also have far-reaching consequences for migrants. The Migration Service will have greater access to the Interior Ministry’s surveillance capabilities, and migrants, whether in Russia legally or not, can expect to experience much more scrutiny and, as a result, violations of rights. The renewed connection between the Migration Service and Internal Affairs also raises the possibility that potential flaws or abuses in the new system could result in legitimate labor migrants being conflated with suspected religious extremists.

It is important for activists, scholars, and international observers to monitor President Putin’s use of the National Guard, especially given its potential to influence the upcoming parliamentary elections. However, it is equally important to observe how the Migration Service’s merger into the Interior Ministry will affect guest workers living in Russia. The reforms may enable the Kremlin to establish a greater level of control over segments of society deemed troublesome, but they also stand to make migrants more vulnerable than ever to arbitrariness and abuse.

Sarah Calderone is an independent researcher on Russian and Eurasian Affairs. She is a Master of International Affairs candidate at Columbia University’s School of International and Public Affairs and completed a Fulbright research grant in Ekaterinburg, Russia, where she studied adaptation and integration efforts for migrants from former Soviet states.