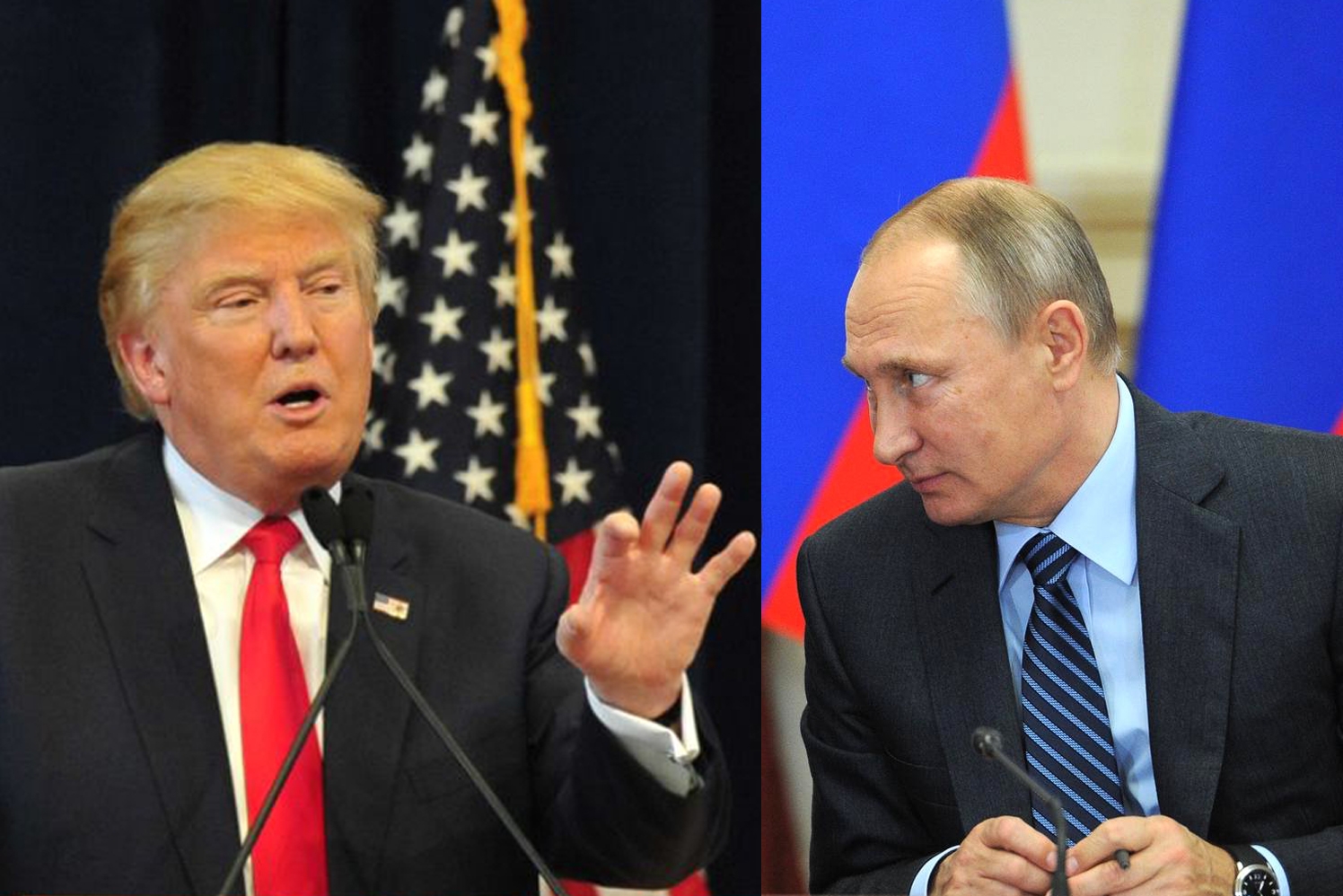 While Russia’s leadership, from Vladimir Putin on down, is casting Donald Trump’s surprise victory on November 8 as a political triumph for Moscow, some argue that Putin may have met his match and some aspects of Trump’s political outlook and modus operandi are likely to give the Kremlin leadership fits. (EurasiaNet collage: Official website of Donald Trump’s presidential campaign; Russian presidential press service)

Be careful of what you wish for; it might come true. This old adage can apply to Kremlin thinking on the approaching presidency of Donald Trump.

Throughout the US presidential election campaign, Russian officials openly favored Trump, repeatedly praising the Republican candidate for sharing Moscow’s dislike of the existing international order. But now that Trump will be inaugurated as the 45th president of the United States in January, his brash and erratic leadership style might well end up posing serious challenges for the Kremlin.

Russia’s leadership, from Vladimir Putin on down, is casting Trump’s surprise victory on November 8 as a political triumph for Moscow.

Russian lawmakers greeted the news of the election result with a standing ovation in the State Duma. Vladimir Zhirinovsky, the gadfly politician who leads one of the four parties represented in the Duma, threw a champagne party to celebrate the occasion, and Gennady Zyuganov, head of Russia’s Communist Party, expressed hope Trump would “make life easier for Russia.”

Putin was also quick to offer congratulations, saying that Russia “is ready and looks forward to” improving relations with the United States. Putin repeated that message in a November 14 phone call with Trump. The two voiced readiness “to pursue constructive cooperation on the broadest possible range of issues,” according to a statement issued by the Kremlin.

To get a sense of why the Kremlin sees the change of the guard in Washington as a big win for Moscow, one needs to understand the global outlook of Russia’s policy elites. It can be argued that all the recent crises in relations between Russia and the West, in particular Russia’s involvement in Ukraine and Syria, stem from Moscow’s deep dissatisfaction with what Russian pundits describe as the hegemonic Western liberal order, which arose out of the ashes of World War II.

When post-Soviet Russia in the early 1990s failed to integrate with the globalizing West, Russian leaders became increasingly wary of the European order. The latter’s core institutions – NATO, the European Union and the OSCE – were viewed as menacing because they enabled the transformation of formerly communist buffer states into European values-based polities bordering Russia.

The situation came to a head in 2014, when Russia annexed Crimea and fomented insurgency in eastern Ukraine. The Ukrainian conflict and Moscow’s subsequent military involvement in the Syrian civil war represent what one Russian analyst has called “Vladimir Putin’s last stand.”

Regardless of the strength of Moscow’s resolve, the Kremlin is keenly aware of its weakness vis-à-vis the West. According to most economic and social standards, Russia finds itself lagging far behind Western nations. It is only Russia’s nuclear arsenal that acts as a kind of an equalizer.

Russia is operating from a position of weakness, yet it seems to now have the advantage in the ongoing contest to shape a new global order. One reason why is that Putin is widely considered a master at playing a weak hand. He is prepared to pivot quickly and immediately seize on and exploit any development that might undermine the current international order from within.

From the Kremlin’s standpoint, the massive migration crisis in Europe, the rise of nativist Euro-skeptic movements in many EU countries, as well as the UK’s decision to leave the EU, are all developments that the Kremlin can use to keep the West off balance, and disrupt the Western-led international order.

A Trump presidency falls into the same category for Moscow. Some Russian strategic planners perceive it as a potential game changer: after all, here is a US president-elect who seems willing to upend the global order largely shaped by his own country over the last 70 years.

It is worth pointing out that about 30 years ago, Russian revisionist historian Viktor Suvorov published a controversial book entitled “Icebreaker.” Suvorov, a former GRU intelligence officer who defected to the West, argued that Hitler’s attack against the USSR in June 1941 had only preempted Stalin’s plan to invade the Reich’s territory in July of the same year.

Suvorov’s somewhat less controversial thesis was that Stalin was seeking to use Hitler and Nazi Germany as an “icebreaker” that would undermine existing political regimes in Europe and bring about “world communist revolution.” By disrupting the interwar world order and unleashing a new war, Hitler would “break ice” and create chaos which eventually would allow Stalin to establish political control in his own image over all of Europe. After the Soviet implosion, “Icebreaker” and other books by Suvorov became immensely popular in Russia, seeing record print runs over the last two decades.

It is highly likely the Kremlin hopes Trump is a latter-day “icebreaker” who can act as a catalyst of global disorder and thereby advance Russia’s interests.

Judging by his statements on the campaign trail, the American president-elect could well end up destabilizing the existing order in several ways: by undermining trust in US security guarantees; by attacking global institutions; by revising trade agreements; and, last but not least, by pursuing what some commentators characterize as “politics of deliberate uncertainty.”

If Trump acts as Russia desires, it could result in an isolationist America quarreling with its old allies in ways that weaken the “historic West” and provide Moscow with lots of extra room for maneuver.

But just as the Democratic Party experienced a rude awakening on November 8, Russia may be in for a surprise. Russian leaders may think Trump’s rise is a dream-come-true, but the president-elect has a political history of confounding expectations.

Some aspects of Trump’s political outlook and modus operandi are likely to give the Kremlin leadership fits. While the Kremlin and Trump may share a negative view of the current global order, the reasons underlying their respective views are anything but identical: Moscow perceives the current international order as global US hegemony; Trump is essentially a pessimist, seeing America in deep decline.

And then there is the matter of Trump’s election slogan: “Make America Great Again!” The ways in which this slogan might be translated into concrete policies could turn out to be not to the Kremlin’s liking.

The Kremlin should worry about Trump’s mercurial personality. Until very recently, Putin has effectively had a monopoly on pursuing the “politics of deliberate uncertainty,” something that gave Russia a diplomatic edge over other international actors.

Now, Putin may have met his match. As a Moscow Times columnist aptly put it, “predictable enmity is now out the window.”