Russian Agreement On Air Base Rankles Some Belarusians 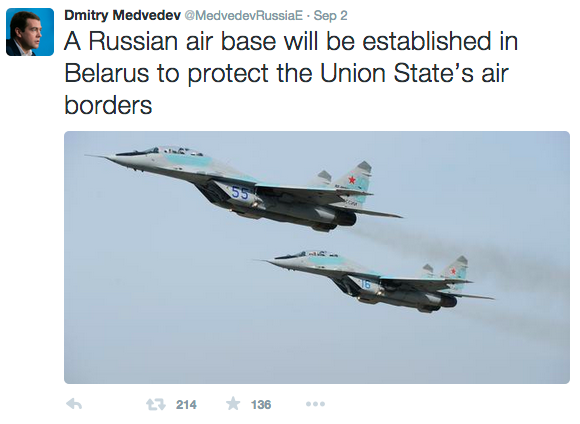 A tweet from Russian Prime Minister Dmitry Medvedev on September 2,

The Russian government has published a draft of its agreement with Belarus on establishment of a new air base, to be Russia's first in that country, and some in Belarus are complaining that it sells out their national interest.

The Russian air base is slated to open some time in 2016 near the eastern city of Babruisk. Negotiations over the terms of the base agreement have been going on for the last couple of years, and on September 7 the Russian government published a draft agreement that it said had been "preliminarily worked out" with Belarus.

But when some defense experts in Belarus combed through the 25-page agreement, many of the provisions didn't sit well. Belarus will get no money, and Russia is not limited with respect to the types of weaponry and equipment it can deploy there. Belarusian law enforcement are prohibited from entering the base without permission of the Russian commander.

"Even not taking into account the unfavorable political consequences of the deployment of a Russian air base, this proposed agreement is discriminatory towards Belarus and sets up a neocolonial character of relations between the two countries," the Belarus Security Blog wrote in an analysis.

Interestingly, this agreement is only valid for 15 years. While many of the Belarusian critics said that was an excessively long term, it's actually substantially shorter than recent Russian base agreements with Armenia, Kyrgyzstan, and Tajikistan, which all will last into the 2040s.

President Alexander Lukashenko may have a hard time accepting the terms of the Russian agreement, said Arseniy Svitskiy, the director of the Minsk Center for Strategic and Foreign Policy Research.

For one, Belarus is proud of the independence it's been able to show in the face of the Ukraine crisis, and has not been pressured in to supporting Russia, Svitskiy told the Russian service of Deutsche Welle. And it doesn't want to lose the geopolitical "dividends" that it's won as a result. "In addition, the Belarusian leadership can't ignore the fact that 45 percent of Belarusians negatively view the idea of a Russian air base."

No one in the Belarusian government has commented on the draft agreement, and publishing this version seems like it could be itself part of the bargaining. All the more so since Belarus is having presidential elections next month, and while Lukashenko is in no danger of losing, it's still a relatively sensitive time for him.