Russian-Armenian billionaire to move to Nagorno-Karabakh

Ruben Vardanyan has said his move is a patriotic gesture and he has dropped hints about entering politics. But others wonder if international sanctions against Russia may be motivating him, too. 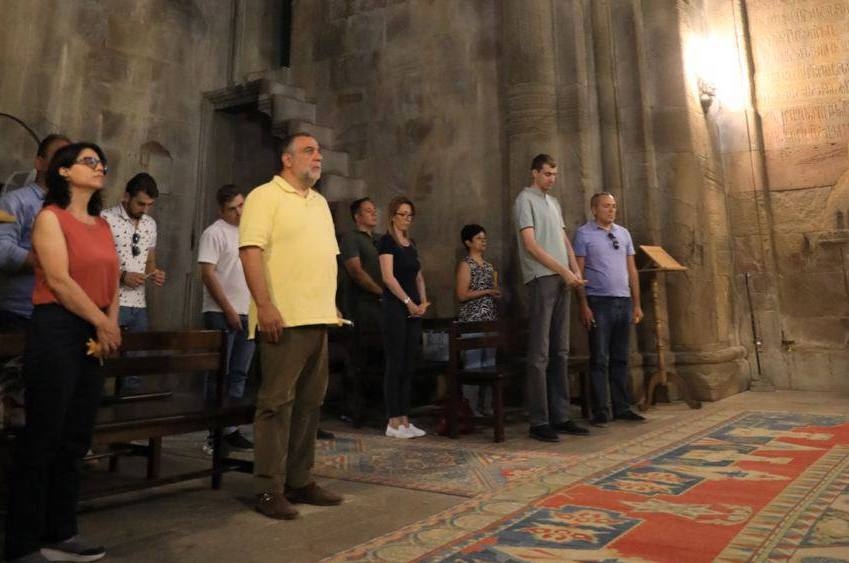 Russian-Armenian billionaire and philanthropist Ruben Vardanyan has announced that he is giving up his Russian citizenship and moving to Nagorno-Karabakh.

While he presented his move as a patriotic gesture aimed at bolstering the precarious Armenian control over Nagorno-Karabakh, some suspect that his motives may have to do more with the heavy financial sanctions the United States and Europe have imposed on Russia.

“Using myself as an example, I want to show how important Artsakh is for me and for all of us,” he said in a video he posted on his Facebook page on September 1, using an alternate Armenian name for the territory. “After the 2020 war, we Armenians around the world have an obligation to be together with the people of Artsakh. We should not just offer moral support, but concrete help.”

He said had “renounced” his Russian citizenship and “come to Artsakh as a citizen of Armenia.” He acquired Armenian citizenship in 2021. He has not offered more details about his relocation plans, except to say that he expects to now spend most of his time in Karabakh. It is not known if he owns a home there.

Vardanyan, a businessman and investment banker whose wealth is estimated at more than $1 billion, is well known in Armenia for his philanthropic efforts there. He founded the IDeA foundation, which carries out development projects and holds the high-profile Aurora Prize awards for humanitarians around the world. He is also a founder of the United World College in Dilijan, an elite school.

In a September 1 interview with Russian newspaper RBC, he was asked about the assets he holds in Russia. “I will give everything to my partners and transfer it to the family foundation,” he said, without offering any further details.

Vardanyan is not under American or European sanctions, but he was named in a draft bill in the U.S. House of Representatives, the “Putin Accountability Act,” which called on him and other “kleptocrats” to be subject to personal sanctions. And even for Russian businesses not under specific sanctions, the sweeping financial restrictions against the country have many businesspeople looking to leave.

He denied that his move had financial motivations. “Ruben Vardanyan is not under sanctions,” he said at a September 2 press conference in Stepanakert, the capital of Nagorno-Karabakh. “If I wanted to escape from sanctions, I could escape to any other country. It’s easy for me to talk about my intentions, because I already have done a lot and am doing a lot for my country.”

Vardanyan has been involved in several large corruption scandals in Russia, including a huge money laundering network and a vast web of corruption run by the government of the Russian republic of Tatarstan.

He is close to Russian President Vladimir Putin as well as to the former leadership in Armenia. He has had a rockier relationship with the country’s current leader, Prime Minister Nikol Pashinyan, after the latter shut down a public-private investment project that the previous government had launched and which Vardanyan had worked on.

Since the 2020 war, Vardanyan has spoken regularly about Armenian affairs while remaining careful to not directly attack the current government.

His corruption scandals have barely registered in Armenia and he has long been seen as a potential political player there, where many citizens are disillusioned both with the ruling party and the opposition. At the Stepanakert press conference, he didn’t rule out seeking political office in Armenia or in Karabakh.

“We are talking about service, not as a position where I exercise power as a ruler over you, but a position in which I serve you,” he said. “I am prepared for anything, but that is not the reason I came here.”

Vardanyan has been rumored to be connected to a political party in Armenia founded in 2021, Country for Life. At the press conference he said that he is “cooperating and exchanging ideas” with the founders of the party, but did not admit to any deeper relationship.

Following his announcement about moving, the party applauded the decision. "The party fully supports Ruben Vardanyan's initiative to create a pan-Armenian front for the strengthening of Artsakh's security and development in all directions," it said in a statement.

Still, many saw the move as more mercenary. “Vardanyan made billions in Russia. … Now Vardanyan may lose this money and real estate due to sanctions against Russia,” wrote Russian pro-government analyst Sergey Markov on his Telegram channel. “And now Vardanyan makes the most elegant gambit. He pretends to sacrifice himself for the people of Karabakh. Moves to Karabakh, and renounces Russian citizenship and thereby eludes anti-Russian sanctions.”