Russian attack on Ukraine hits close to home for Georgians

To many Georgians, Russia’s invasion reminded them of their own conflict in 2008. 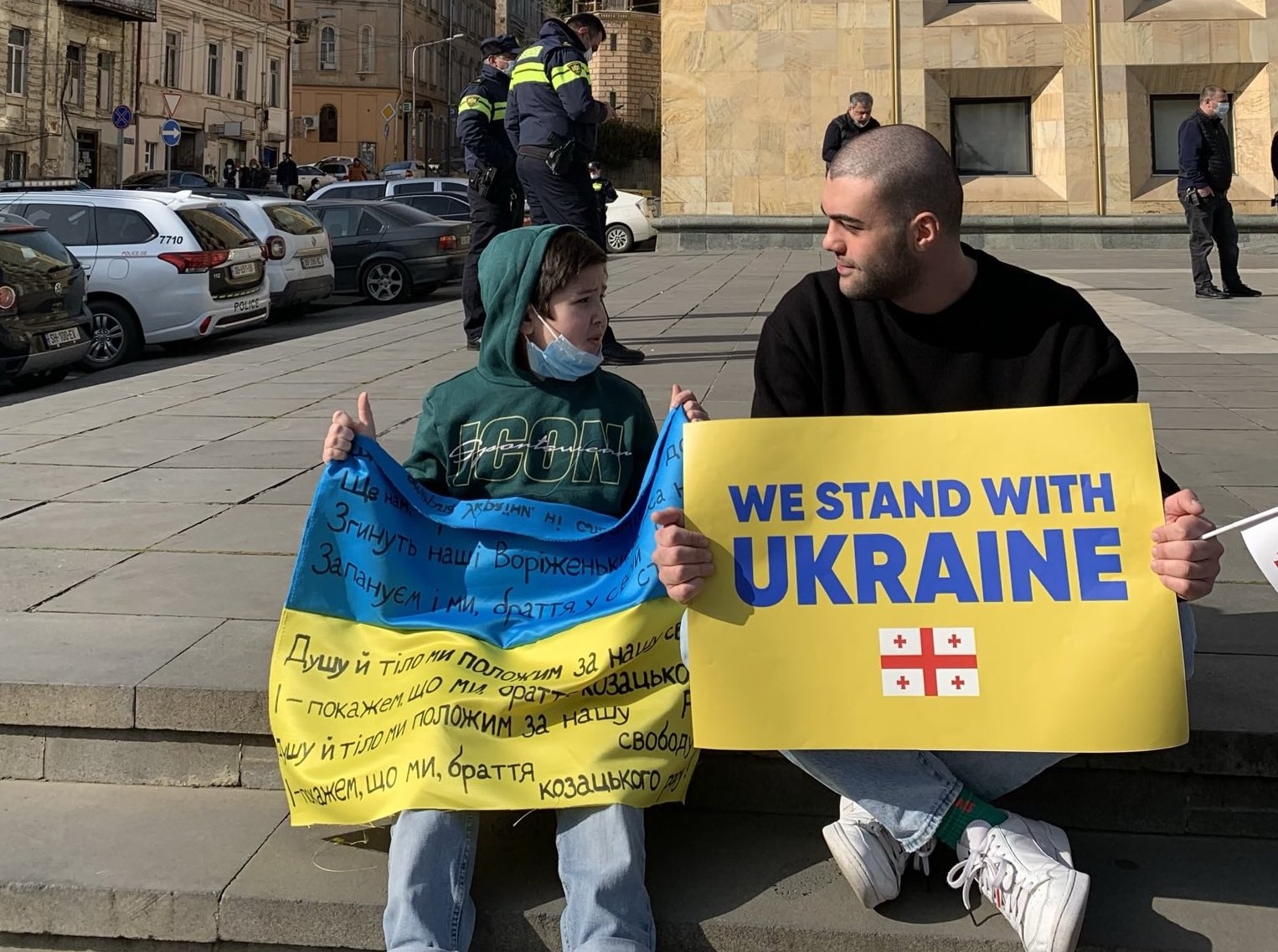 With Ukraine under attack, for many in Georgia it has been déjà vu, bringing up traumatic memories of the 2008 war with Russia.

“I can’t stop crying,” Mari Gabedava, a mother of three in Tbilisi, wrote on Facebook. “How many times can they get away with this?”

Like many Georgians, she posted a picture of the Ukrainian flag on her profile and wavered between expressions of solidarity and frustration over her helplessness. “I never believed that changing an avatar on Facebook can help solve a global problem, but I can’t help crying with gratitude seeing Ukrainian flags lighting up everywhere,” said Victoria Shtorm, a Ukrainian living in Tbilisi, on her Facebook page. “It does matter.”

Many Georgians rallied practical support however they could, using social media to share options for how to donate to the Ukrainian armed forces and for relief efforts for civilians. Several hotels offered free accommodation to potential refugees from Ukraine.

For some Georgians, the situation felt deeply personal. After the news of Russia’s shelling of the Ukrainian capital broke early on February 24, Andro Dadiani struggled in Tbilisi to comfort his Ukrainian wife and children; his mother-in-law is in Kyiv. As they watched the news, his three-year-old daughter began crying, “Daddy, hurry, you have to help babulya [grandma].”

“When things were getting bad, we tried to convince her [his mother-in-law] to come to Tbilisi, but she could not believe that the war would reach Kyiv,” Dadiani told Eurasianet. “Now her only option is to get to Poland by car and catch a flight from there.”

For some, the sense of helplessness was amplified by anger at their own government for its perceived spineless reaction to the Ukrainian crisis. While Georgia’s leadership did condemn Moscow’s attack, it did not go out of its way to reciprocate the solidarity that Ukrainian officials showed during the 2008 Georgia-Russian war.

“We express strong solidarity with our friends, the Ukrainian people, and call on the international community to take all the necessary steps towards de-escalation,” Georgia’s Foreign Ministry said in a February 24 statement. But while the foreign ministers of Latvia, Lithuania, and Estonia gathered in Kyiv in a show of solidarity – reprising a similar gesture in Tbilisi in 2008 – Georgian officials stayed home, unlike the Ukrainian, Polish and Baltic leaders back then.

Speaking in the center of Tbilisi, the president of Poland at the time, Lech Kaczyński, told the crowd: “Today Georgia, tomorrow Ukraine.”

While ordinary Georgians have been organizing various activities to support Ukraine, Georgia’s government – as it has done generally in recent years – has tried to avoid confrontation.

The ruling Georgian Dream party controversially made no mention of Russia in the resolution it passed in support of Ukraine on February 1, outraging Georgians who wanted them to be more direct.

“It is perilous to be under the illusion that distancing yourself from the Russian-Ukrainian conflict is good for national security,” analyst Giorgi Badridze told the TV network Mtavari Arkhi. “By isolating yourself you run the risk of ending up on the wrong side of a new iron curtain.”

Parallels to 2008 – when Russia formally recognized Georgia’s breakaway regions of Abkhazia and South Ossetia following a brief war – are unescapable, and have even been made by Russian officials themselves.

“In 2008, I was forced to take difficult measures to recognize the independence of South Ossetia and Abkhazia. Applying military force and political will, Russia was able to save the lives of hundreds of thousands of people,” said Dmitry Medvedev, the deputy head of Russia’s National Security Council, on February 21 as Russia was preparing to formally recognize Ukraine’s breakaway regions of Donetsk and Luhansk. Medvedev was president during the war with Georgia. “NATO did not learn the lesson well and continued to creep closer to the Russian borders and to expand the circle of potential members of the alliance.”

The order of events has been slightly different this time around in Ukraine – Moscow first recognized Donetsk and Luhansk, and then jumped to large-scale military action – but in both cases Kremlin cited NATO’s expansion and its obligation to protect the residents of these regions as the casus belli.

Margarita Simonyan, the head of the Kremlin’s English Language news mouthpiece Russia Today, drew parallels between the Olympic Games and Russia’s moves toward Georgian and Ukrainian territories. “The 2008 Olympics – liberation of Abkhazia and South Ossetia, the 2014 Olympics – return of Crimea, the 2022 Olympics – insert the correct answer here,” Simonyan tweeted on February 19.

Ukrainian officials saw parallels, too. Holding the Russian decrees of the 2008 and 2022 recognitions next to one another, Kyiv’s ambassador to the UN Sergiy Kyslytsya said that the decrees were virtually identical, with only names of the regions changed. "They copied it to the word, no creativity,” he said, adding that Kremlin must have “a well-working copier machine.”