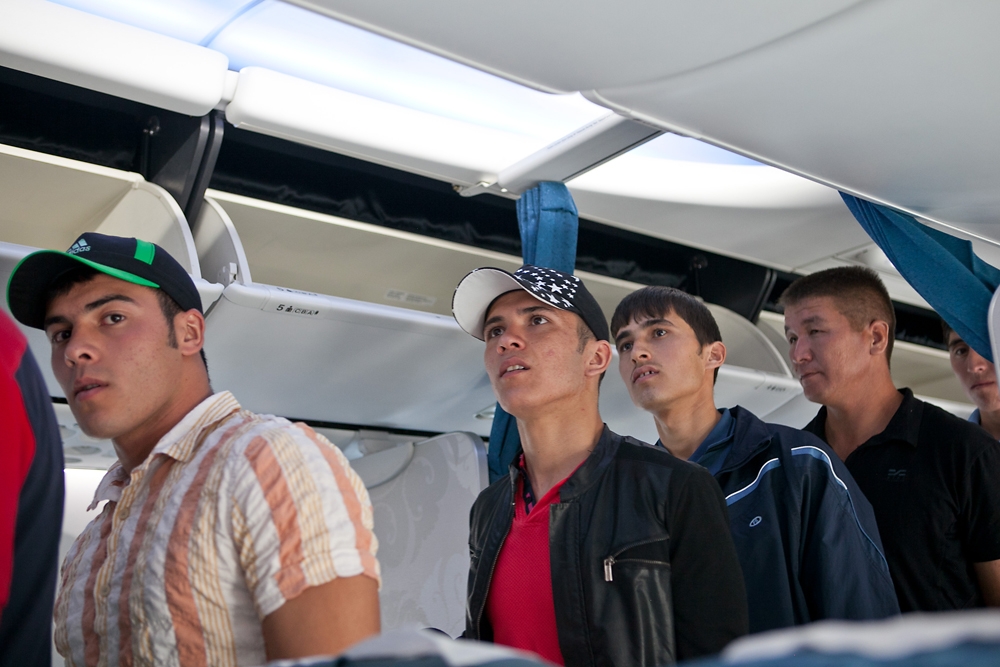 It’s the Central Asian labor migrant’s second-worst nightmare (an encounter with violent Russian xenophobes is usually the first): on arrival in Russia, an immigration officer reviews the submitted passport with cold intensity. Then, a red light goes off and a couple of border guards swoop in and lead the would-be migrant away. Border guards have identified another one on the list.

Millions of Central Asians – primarily from Kyrgyzstan, Tajikistan and Uzbekistan – travel annually to Russia to find work. The economies of their home countries are dependent on these migrant workers’ remittances. At the same time, Moscow is succumbing to concerns about unchecked migration, even though Russia’s demographic troubles point to a possible labor shortage in the not-so-distant future. Those fears have prompted Russian officials to bar hundreds of thousands of migrants from re-entering Russia because of alleged infractions, like working without a permit or failing to register on arrival (most citizens from post-Soviet states do not require visas to enter Russia).

Over the past year, Russian authorities added over 600,000 foreigners, mostly citizens of formerly Soviet states, to the blacklist, the head of the Federal Migration Service (FMS) was quoted as saying in February. According to Kyrgyz officials, this number is climbing quickly and now includes 60,000 Kyrgyz citizens (there are between 600,000 and 1 million Kyrgyz working in Russia at any given time).

The trouble is; few would-be migrants know they’re on the list.

Aibek, a 22-year-old construction worker from Osh, says he was refused entry at a Moscow airport in December. An officer there told him that he had violated Russian residency permit regulations earlier in that same year. Aibek not only lost the money he spent on his ticket, and the money he was forced to borrow to fly immediately home, but also the potential wages. “For the past two months, I’ve been looking for a job, which is not easy in Kyrgyzstan. If I made enough money [in Russia], I could support my parents and start saving money for my wedding, which is now something I can’t afford,” Aibek told EurasiaNet.org. He declined to give his last name because he hopes he can make it back into Russia at some point.

Aibek contends that he always paid all residence registration fees in Moscow: “Maybe my landlord cheated and did not pay to legally process papers on my behalf as agreed,” he speculated.

The blacklist is a growing concern for poor families in southern Kyrgyzstan, says Meerim Dosmuratova of Interbilim, an Osh-based NGO that helps educate migrants about their legal rights.

“It is difficult for poor jobless people to spend 15,000 soms [approximately $275] to buy a one-way ticket [to Russia]. And if they are not allowed to enter, or are deported, they have to buy tickets to get home. So their families suffer huge financial losses,” Dosmuratova told EurasiaNet.org, adding that for many rural families, a migrant laborer is the chief provider. By comparison, a schoolteacher in Osh earns about 5800 som, or $106 a month.

Russia’s Federal Migration Service has posted the blacklist online, but many rural Kyrgyz have no access to the Internet and do not hear of the list until they arrive in Russia and the red light goes off.

“When we sell air tickets to our clients, we check their names on the website,” said a representative of a private ticket office in Osh. Still, she acknowledges, many slip through.

Kyrgyz diplomats in Moscow see the blacklist as part of a wider campaign to reduce the number of Central Asians in Russia. In recent years, the influx of Central Asian guest workers has been met by growing xenophobia among Russians who don’t like the changing demographic trend, especially in cities like Moscow and St Petersburg. “Negative perceptions have emerged thanks to the large influx of migrants, which cause the Russian [labor] market to shrink and unemployment to grow,” Aiymkan Kulukeeva, a spokeswoman for the Kyrgyz Embassy in Moscow, told EurasiaNet.org. “In addition, immigrants from Central Asia […] do not speak Russian, and ignore basic rules of behavior, not to mention respect for the culture and customs of the local population.”

Others believe the blacklist is being used as leverage by Moscow: Russian leaders are trying to strong-arm a hesitant Kyrgyzstan into its Customs Union with Belarus and Kazakhstan.

“This is pressure on our country, which is being pulled by unhealthy economic and political associations like the Customs Union,” Kyrgyz opposition parliamentarian Ravshan Djeyenbekov told EurasiaNet.org.

Kyrgyzstan has been dragging its feet on joining the union. So Russia is applying psychological pressure and may try to destabilize the country, alleged Djeyenbekov. He fears the Kremlin will “invent a problem to drag us into the union.”

While Vladimir Putin’s Kremlin has shown it won’t hesitate to use asymmetric methods to keep former Soviet-era vassals under its influence (most recently Ukraine), Russian officials contend their first priority is reforming migration and protecting the Russian economy.

“Due to slowing growth in the global economy and negative trends in the Russian economy, there is no need for so many labor migrants today,” said Bakhrom Ismailov, an advisor on migration policy to the Russian State Duma, confirming that Moscow is expanding the blacklist. “Moreover, unemployment is expected to grow in the Russian Federation in the coming years.”

Bakyt Ibraimov and Hamid Tursunov are writers based in Osh.