Men seeking to avoid being sent to Ukraine are flocking out of the country, and Georgia is one of the few options that doesn’t require an exorbitant air ticket. 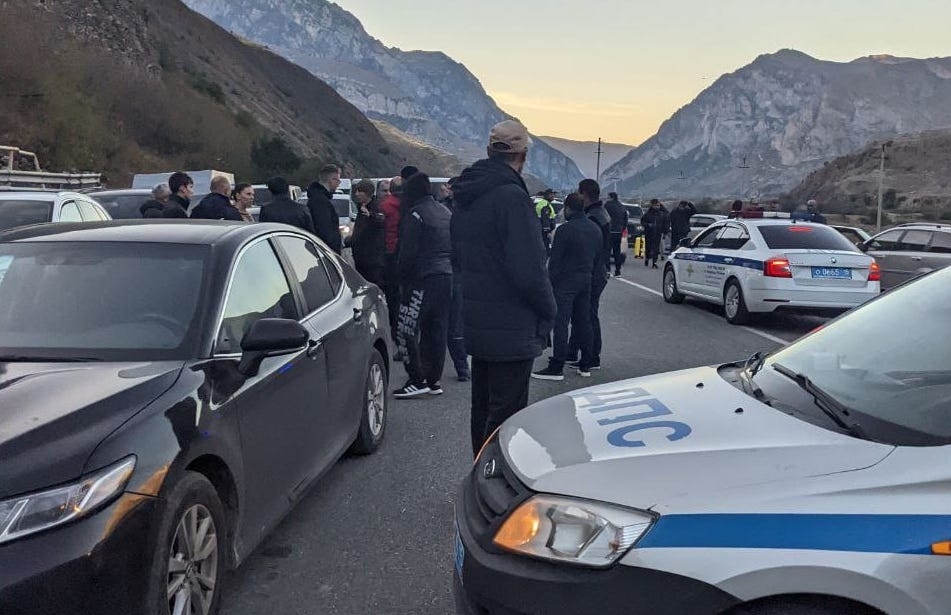 As Russians rushed for their country’s exits to avoid conscription into the war in Ukraine, the land border with Georgia turned into an apocalyptic sight, with people rushing to safety in cars, riding bikes and electric scooters, and even on foot.

The line of cars heading southward extended for miles and some reported having to wait for days to get out of Russia.

“It’s like a zombie invasion movie back there,” one young Russian man told Eurasianet, after he came through the checkpoint on a bike on September 26. “We stood there for two days!”

With many of those fleeing fearing that the border could close to men of fighting age at any time, the man, who asked not to be identified, got out of his car and crossed the border on a bike. His girlfriend stayed back in the car. “I don’t think she can get through today,” he said. “The line is insane.”

On September 26, Russian authorities moved an armored personnel carrier to the border point to, they claimed, prevent people from breaking through. “We are preparing in case conscripts decide to break through the border without going through the proper border procedures,” Russia’s Federal Security Service told the Russian news website RBK.

Videos posted online by escaping Russians showed chaotic scenes of cars getting out of the line and driving across the rugged fields between the Georgian and Russian border posts. Drivers that made it closer to the Georgian side were selling seats via Telegram channels to people further back in line.

“We flew from Moscow to Makhachkala [the capital of the Republic of Dagestan] and then got a cab that was meant to take us to Georgia, but we had to switch cars at the border,” said Alexey, who asked to be identified only by first name. He came with his wife and daughter.

“We switched to a marshrutka [mini bus] that was at the front end of the line and paid 5,000 rubles [$86] per seat,” Alexey said. “Even then we had to wait for almost an entire day just to go from the Russian checkpoint to the Georgia one.”

The border crossing at Zemo Larsi is a notorious bottleneck even in ordinary times, as it is the only route for people and cargo moving between Russia and Georgia and points further south. Long lines of cargo trucks frequently mass on the narrow two-lane roads that wind through the soaring Caucasus Mountains between Georgia and Russia.

Now, with the panic sown by Russian President Vladimir Putin’s announcement of a military mobilization, it has descended into chaos. Unknown thousands of Russians have thronged toward the Georgian border to avoid the prospect of getting summoned to serve, and the queue appears to only be growing exponentially.

Telegram chat rooms, including ones formed solely for Georgian border crossers to communicate, were abuzz with questions from people stuck on the Russian side of the border: “Are they letting men out?” “Can you still cross if you already received your summons?” “Can you cross on an e-scooter?” “Are the Georgians letting everyone in?”

Some people queuing at the border have attempted to bring some order to the chaos. “Fellow participants of the traffic jam, cab drivers who are ferrying pedestrians back and forth across the border and wedge their way in front of you in the line are largely to blame for the congestion,” one Telegram user complained.

She called on passengers to get out of their cars and help block the road to cab drivers who attempt to skip the line by getting on the oncoming traffic side. She also called on other drivers to take in pedestrians for free or for a small fee to help expedite the crossing.

Russians who emerged on the Georgian side told Eurasianet that traffic police in the border-adjacent Russian republic of North Ossetia were preventing cars from proceeding toward the border. “We had to pay them off to pass, others took detours,” one Russian said. “It’s ridiculous, you can’t move freely across your own country these days.”

With air tickets either sold out or going for exorbitant prices, land crossings are the most viable exit options for many Russians. Georgia is one of Russia’s few immediate neighbors that Russians can enter easily: visa-free for up to a year.

One young Russian man arriving September 24 at Tbilisi’s airport told Eurasianet that he had bought his ticket last-minute to avoid the draft. "I'm not going to go kill innocent people or die myself because Putin lost his marbles,” he said.

Many Georgians are watching the influx with concern. Russians have been arriving to Georgia en masse since the start of war in Ukraine: many for political reasons, others driven out by international economic sanctions against Russia. Summer brought a large number of tourists (260,810 arrivals in August alone, according to Georgian police), as Russians have few other vacation options. From March through August nearly 800,000 Russians came to Georgia, based on border police reports. They do not report the country of origin of those departing.

The number of arrivals had been expected to go down with the end of the summer tourism season, but then came the mobilization.

There are no reliable estimates for the number of recent border crossers, but officials on both sides attempted to play down the scale. One Russian official said on September 26 that 115,000 people had crossed in both directions over the past six days, which was 23 percent higher than the six days before that. Georgian Finance Minister Lasha Khutsishvili said that while the number of border crossers had increased, the situation at the border was “under complete control” and that there was “no dramatic situation” there.

The new wave of Russian entries came as the situation around Russian arrivals was already tense.

With Georgia viewing Russia as an invader – Russian troops are deployed in the breakaway territories of Abkhazia and South Ossetia to prevent any attempt by Tbilisi to reclaim its territories – and having a long, tormented relationship with Russia, many Georgians vigorously oppose the influx of Russians.

And as Georgians desperately root for a Ukrainian victory, many feel that offering an escape hatch to Russians lowers the chances of the draft creating domestic pressure on the Kremlin to end the war.

Russians coming through the border appeared conscious of these tensions and chose their words carefully in conversations with Georgian journalists. On September 26, when one young Russian man was peppered with questions by Georgian reporters about why he had escaped to Georgia instead of standing up to Putin, he responded carefully: “I’m glad to finally be in a free country.”