The event raised money for pride parades this summer. 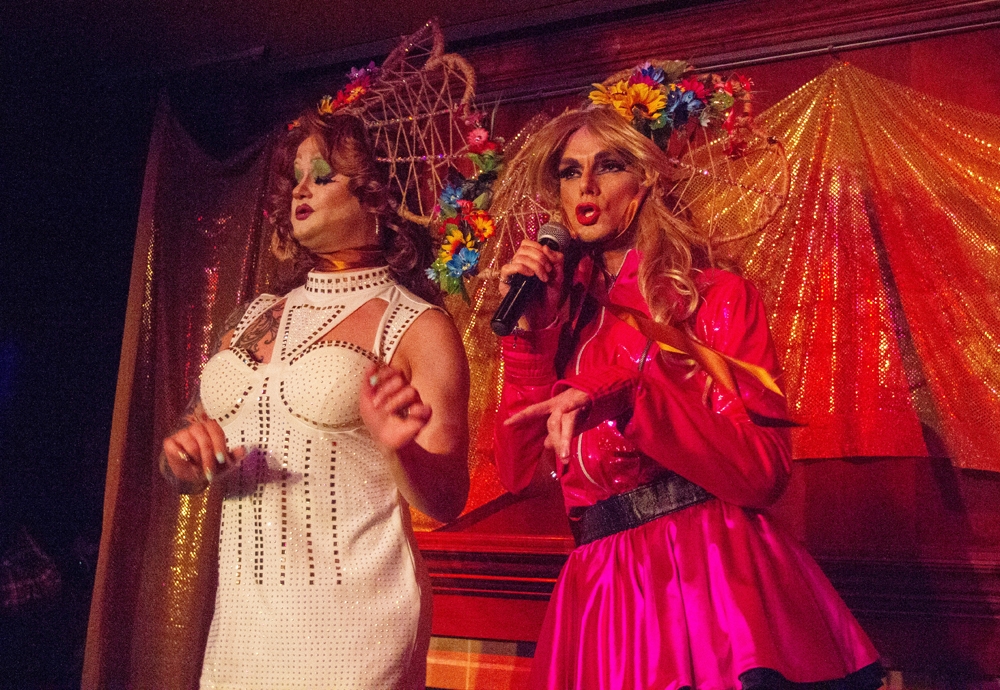 Strutting on stage in stilettos and towering headdresses, Russian-speaking immigrants turned the traditions of their homelands upside-down with a cheeky drag show in New York City last weekend.

The performance, called “Nashi Pesni” (Our Songs), is held each month at Therapy NYC, a gay bar near New York’s theater district. The performers are members of RUSA LGBT, an organization for lesbian, gay, bisexual, and transgender immigrants from Russian-speaking countries.

The event was free, but organizers collected tips to support RUSA LGBT’s participation in the Brighton Beach Pride Parade on May 20, as well as RUSA’s contingent in the larger New York City Pride Parade later in the summer. Last year’s event in Brooklyn was the first-ever pride parade for Russian-speaking immigrants in the United States.

“It shows the spectator that you don't have to be ashamed of yourself, your desires, your self-expression,” explained performer Alex Kutuzov. His alter-ego is Corbie Crow, who started off the night dressed to the nines in a voluminous ballgown, belting out the ‘90s hit “Zhenshchina Vsegda Prava” (The Woman is Always Right).

“I want to show that everyone can express themselves the way they need to,” Kutuzov said, in Russian. “I believe when I get on stage, I expose my inner self.”

The biggest hit of the night was the song “Russian Style,” when "Queen Alexis" – a blonde wearing a gigantic royal headdress – gyrated on stage while a shirtless bathhouse attendant thrashed her with birch branches. It is traditional for Russians to flog each other with the twigs, known as veniki, when visiting a banya, or bathhouse – less so to do it wearing a red corset.

Some listeners saw a political message in the nostalgic pop selection. Lyosha Gorshkov, president of RUSA, said songs from the ‘90s in particular hearkened back to a more tolerant era in Russian society.

“We want to remind [people] that the culture itself was queer,” he said, referring to the liberal vibe of the early post-Soviet period, “when people just didn't give a shit about who you were [or] what was your identity.”

It’s only the second year that Brighton Beach, the heart of New York City’s Russian-speaking immigrant community, will hold a gay-pride parade. Gorshkov expects up to 1,000 spectators will attend.

One of the parade’s goals is raising awareness about the persecution of LGBT people in Eurasia. News from the region is often grim: In October, Tajikistan sparked outrage when it created a registry of over 300 gay and lesbian people, purportedly as a public health measure. Azerbaijan temporarily detained over 80 queer people in September and forced them to undergo tests for venereal diseases. And last year in Chechnya anti-gay purges attracted global attention after an independent Russian newspaper found that over 100 gay men had been kidnapped and tortured by local authorities.

"We're demanding justice for people who were persecuted, who are missing, and we're demanding [the Russian authorities] investigate," said Gorshkov.

The scars of persecution still linger even within the safe confines of a gay bar in the New York City. When asked why he had come to the show, one member of the audience, 34-year-old Alexey Klipenko, pulled up his shirt to reveal the thick track of an old gunshot wound across his stomach.

“They tried to kill me,” he said. He fled Moscow for the U.S. eight months ago. Tonight, in this environment, he said he felt safe and loved.

Such persecution threw into starker relief the light-hearted joy of the evening. Audience members belted out pop hits and danced unreservedly as a disco ball threw spots of rainbow light over their heads. Any hints of inhibition could be eased with an “Angry Putin” – a house cocktail made with vodka, lime, and ginger beer.

Event organizer Elvira Brodskaya, who emigrated from St. Petersburg with her wife, said that events like these allow queer immigrants to celebrate their culture and also themselves.

“When Russian queers come to the USA, to a free country, they are often very afraid to speak, to show themselves,” she said. Yet the evening demonstrated that “we are not afraid to speak loudly.”