Before the war, many in Russia didn’t think much about who they were. Now they are asking more questions. 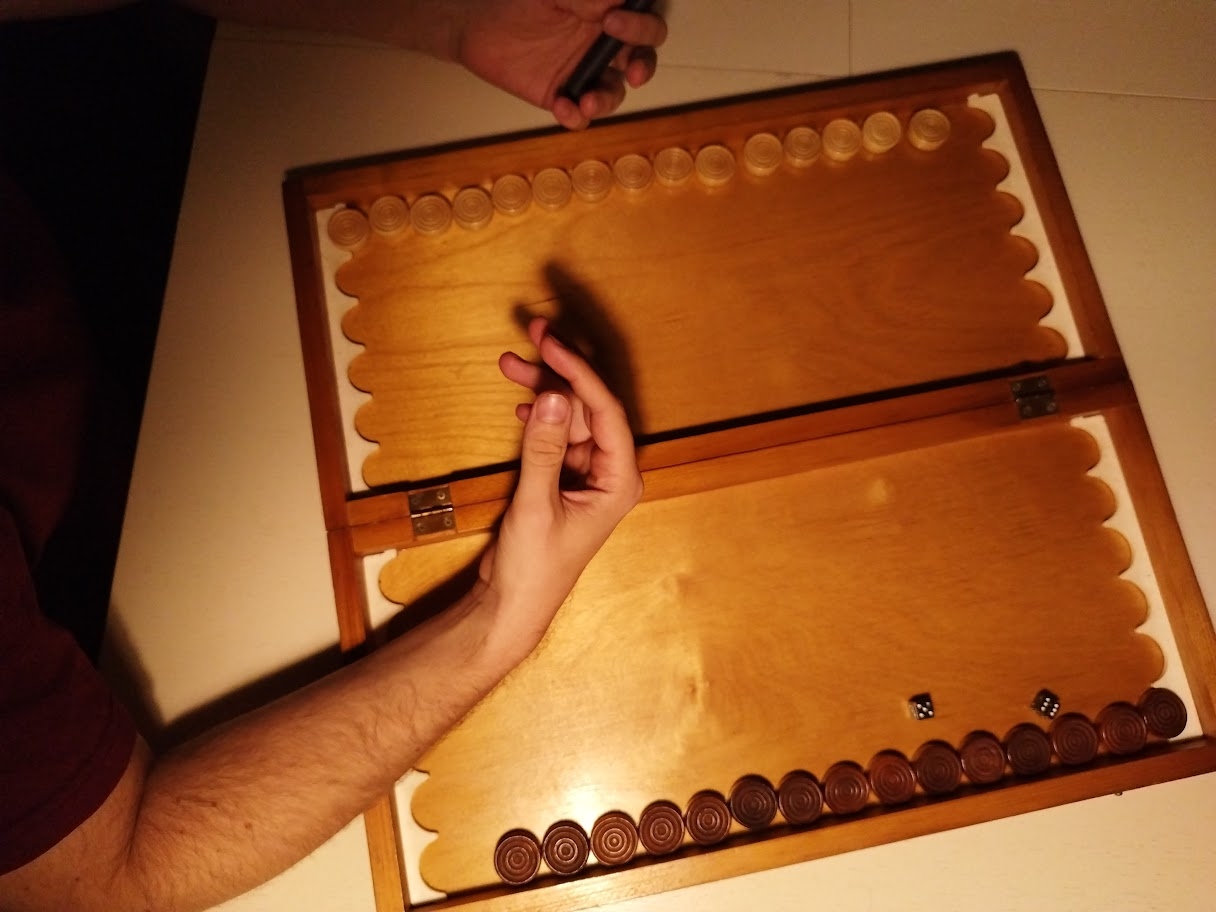 Conversations in the apartment take place around a nardi board. (Arpi Bekaryan)

The first thing you notice when you enter the apartment is the shoes. There are so many sneakers, boots, and slippers that they take up the floor all the way from the front door to the living room.

The apartment, in a block in a Tbilisi suburb, crammed 16 people into its four rooms in early March, all of them friends who had fled to Georgia from Russia after their country launched its war in Ukraine. Most have since found less crowded accommodations, but the apartment remains the group’s social center.

Prominently placed in the living room is a nardi board. The game (closely related to backgammon) is less a Russian tradition than a Caucasian one, but the residents of the house have adopted the local custom.

It is around the nardi table that conversations among the group take place, inevitably centering on the war and their place in it. The anti-war and pro-Ukraine position is one that unites everyone in the house: from the kitchen you can see a Ukrainian flag hanging from the balcony, and on top of that a small Georgian flag waves in the breeze.

But when the conversation shifts to the group members’ own relations to the war, everyone has varying views, and the discussions become more personal and painful. Amid the trauma of the war, these Russians are exploring who they really are.

“Now people are asking themselves questions about their own identity that they didn’t ask themselves even after 2014 and the annexation of Crimea,” said Artur, one of the group.

Artur is a journalist who traveled regularly to Ukraine, and he has many friends and colleagues there. He’s tried to keep in touch with some of them but many of them cut him off entirely.  “I wrote to them and asked how they are doing, and they answer: ‘How can I be? Your country is bombing my country’s cities?”

It’s not the way he is used to thinking about his identity, Artur said. His family moved to Russia from Armenia in the 1990s, and although he grew up in Russia, did all of his schooling there, and speaks better Russian than Armenian, he still considered himself Armenian.

“When we talk about nationality we understand it to mean your ethnicity as well, but for Ukrainians it’s usually citizenship,” he said. “In 2014, during Maidan [the protests in Kyiv that eventually brought down the government] the first man who was shot was an Armenian, Sergey Nigoyan. Everyone [in Armenia] was saying that ‘an Armenian guy was shot.’ But Ukrainians were saying: ‘what Armenian? He is Ukrainian, he has Ukrainian citizenship.’ So if you are a citizen of Russia, you are Russian, hence you also are a part of that.”

Another member of the group, Nadya, is a 31-year-old architect from Moscow. She was abroad on vacation when the war started, and her mother warned her not to come back home. She did, only to find that all of her friends were packing up to flee the country. So she did the same.

Thinking back on her social circle in Moscow, she now realizes that many of the people she knew may have had Ukrainian roots, but it never came up. “I have to admit that before I would never wonder if a person was Russian, Ukrainian, or Belarusian, because we all look similar.” But after the war started, Nadya came to think the division was in fact important, as one element of the conflict is Russia’s attempt to deny Ukrainian identity. “Now it’s about solidarity with Ukrainians as they fight for their freedom,” she said.

In the early days of their flight from Russia, the group barely ventured out of the apartment except to attend the pro-Ukraine protests that were frequent in Tbilisi in those days. Those demonstrations ended long ago and now Tbilisi’s streets have turned into a silent protest: ubiquitous graffiti cursing Russia, Putin, and Russians.

But Nadya says she doesn’t take it personally and understands Georgians’ grievances against her country. She sees the street art as an effort to “provoke a reaction, a dialogue, not aggression. Graffiti is a form of art and that’s the purpose of art.”

Another of the group, Dima, chimed in. “In everyday life you don’t experience any hostility. Very few Georgians hate Russians.”

Still, Dima said his first days in Tbilisi were difficult. “I realized that I was somewhere that people were angry with me,” he said, going on to discuss Georgia’s Russian-backed breakaway territories. “I knew they had their reasons for that, this [the Ukraine war] was salt in their wounds, but still I couldn’t understand: Man, when Abkhazia happened I wasn’t even born yet, when South Ossetia happened I was just 16.”

Dima, a 30-year-old video producer from St. Petersburg, has Georgian roots: His grandfather is Georgian, and Dima himself began exploring that side of his heritage on a visit to the country in 2016. In Georgia, he experienced something that he had felt inside himself but that was rare in Russia: “That feeling that you want to have many people around all the time [...] the hospitality.” Still, even as he begins to feel more Georgian, the feeling isn’t mutual. He doesn’t speak Georgian, and other than his grandfather there is little else connecting him to the country.

“Georgians don’t consider me Georgian,” he said with a laugh.

His grandmother in Dnipropetrovsk, meanwhile, never used to think in terms of ethnic identity. That, too, is changing. “Before the war we never talked about her identity, I didn’t know if she felt more Ukrainian or Russian. But now my mom says whenever she talks to her on that topic, my grandma answers, ‘I’m Ukrainian.’”

Artur, meanwhile, is steadily strengthening his ties with Armenia. His family left Armenia in difficult times, having just come through the first war with Azerbaijan and in deep economic privation. His parents wanted their children to never see war again. But despite the effort his family made to get him out of Armenia, in 2018 Artur moved to Yerevan as Russia was becoming more authoritarian and Armenia, by contrast, experienced the hope of the Velvet Revolution. “My parents didn’t understand me, they thought I was not in my right mind. But I was going crazy in Russia,” he said. Still, he moved back to Moscow for another job two years later.

Then, when the war in Ukraine started, he returned to Yerevan and has been bouncing back and forth between Georgia and Armenia. He even got Armenian citizenship, finalizing the process on September 14 – the day after Azerbaijan had launched a heavy attack on Armenia. “Now it doesn’t feel safe anywhere,” he says.

His family back in Russia is under renewed threat: His brothers and brothers-in-law are of draft age. “They just don’t have the strength, resources and opportunities to leave,” he said. One brother-in-law just got Russian citizenship in the days after the mobilization was announced.

Artur has now settled in a quiet village in Armenia’s Lori region, close to the Georgian border, but he still comes to Tbilisi to visit his friends. “There I’m close to the mountains, and I feel much better.”

He is thankful that his situation is not as painful as it is for many of his Russian friends. While he has spent nearly his whole life in Russia, he still never thought of it as home. “I believed in the best though, and well, it didn’t work out,” he said. “I realized that and disconnected myself a long time ago.”

Arpi Bekaryan is a journalist based in Yerevan.