Journalists from the final remnants of Russia’s independent media are trying to find refuge in their southern neighbor. But there are doubts about how safe it really is. 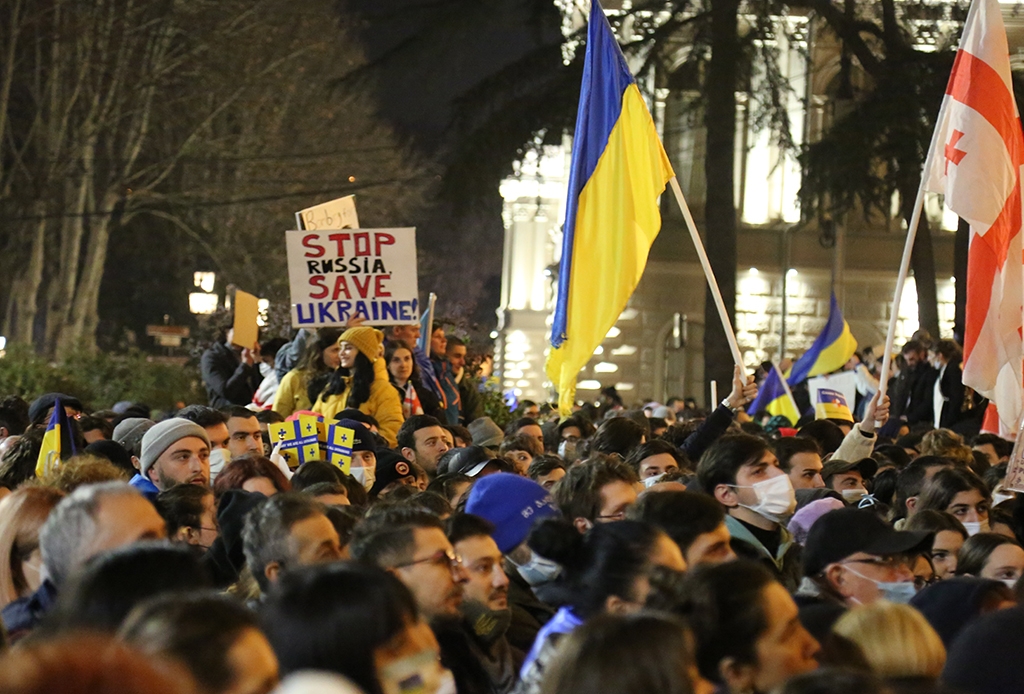 A pro-Ukraine protest in Tbilisi (photos by Giorgi Lomsadze)

Iconic Russian radio station Echo of Moscow was already on its last legs when an editor with its St. Petersburg bureau, Valery Nechay, walked into his apartment on February 27 to find three unknown men waiting for him inside. The well-built intruders with what Nechay identified as Chechen accents grabbed the diminutive, bookish journalist and peppered him with threats.

“They said that I had to leave Russia immediately or else […] let’s just say they used very convincing language,” Nechay said with an ironic smile as he recounted the story five days later in a Tbilisi café. He is one of the many Russian government critics who have sought refuge here against the Kremlin’s crackdown on domestic blowback against its war in Ukraine.

“Before this happened, I had received a stream of threats on my phone. Lots of other journalists received the same kind of threats,” Nechay said. “At first, I did not pay much attention as it had happened before, but then some men went to my mother’s place to tell her that I had to leave the country.”

When the threats literally hit home, Nechay decided not to take his chances and booked a flight to Yerevan. He chose to go to the Armenian capital because Russians can travel to Armenia with their domestic passports. “I was afraid that they would arrest me right at the airport had I used my international passport, which I had to do to fly to Georgia,” he said. Flying to Armenia and then crossing over to Georgia by land seemed like a safer option.

Just as Nechay landed in Armenia, Echo of Moscow ceased to exist.

The Kremlin’s media regulatory agency, Roskomnadzor, had taken the station off the air on March 1, accusing it of spreading “false information about the actions of Russia’s military personnel.” In a desperate effort to survive, the station tried to accommodate the Kremlin’s ban on the word “war,” using circuitous language while still trying to cover developments in Ukraine. But it wasn’t enough and the station’s corporate parent, Gazprom Media, moved to liquidate the station entirely after three decades as Russia’s primary liberal outpost.

“Lies are everywhere,” said Katerina Kotrikadze, a host at Dozhd, in her last appearance on air in Russia before she left for her native Georgia.

“Not only can you not tell the truth about this war, but they are telling you that you will be regarded an extremist if you say the truth, and that means 15 years in prison,” Kotrikadze told Georgian TV channel Mtavari Arkhi after arriving in Tbilisi.

With the closures, Russia has been left without broadcasts of uncensored information about the war in Ukraine. The handful of remaining freewheeling online and print outlets, like Novaya Gazeta, are forced to use ellipses instead of the word “war.”

As the veil of censorship came down on Russia, and threats of violence and imprisonment grew, journalists fled. Some headed to neighboring Georgia, believing the country to be the safest quick escape due to its pro-Western reputation.

Nechay said that crossing from Armenia into Georgia felt like going across the Berlin Wall during the Cold War. Given what he knew of Armenia’s economic and security dependence on Russia, he feared that Armenian border guards would not let him pass. “I sighed with relief when they let me through,” he said. But he hopes to move on soon: “Even Georgia does not feel safe.”

Although Georgia broadly allies itself with the West, the government’s deeply cautious response to Russia’s invasion of Ukraine has raised many questions.

Unlike Kotrikadze, her fellow news host at Dozhd, Mikhail Fishman, could not find refuge in Georgia. Border police at Tbilisi International Airport did not allow him to enter on March 5.

“I arrived in Georgia with my two daughters aged 14 and 4. They let them in, but I was asked to wait,” Fishman told RFE/RL’s Georgian Service from Baku. A third daughter, the oldest, was already living in Georgia. After an hour, he was denied entry without explanation and put on a plane to Baku. Fishman, who has been to Georgia many times, assumes that the denial is linked to his professional activity.

Georgia’s Foreign Ministry and border police have not responded to Eurasianet’s queries about their justification for denying Fishman entry.

Allowing Russians in has now become a politically hot topic, given the ongoing stream of Russians that are flowing into Georgia. Many argue that by helping Russians escape, they would be undermining international sanctions aimed at stopping the war in Ukraine by economically isolating Russia and driving ordinary Russians to resist their government.

Georgians also are angry about Russian invasion of their own country in 2008, and many are now convinced it was a dress rehearsal for the attack on Ukraine. Amid the continued presence of Russian troops in the breakaway regions of Abkhazia and South Ossetia, and regular arrests by Russian border guards of Georgians living in the vicinity of these regions’ de-facto boundaries, many Georgians argue that their country should not be flinging its doors open to all Russians.

The Georgian government has been downplaying the influx.

“If people are escaping the regime and want to live in a free environment, we should allow them to proceed with their activities here in a legal and proper manner, regardless of their nationality,” argued Economy Minister Levan Davitashvili.

But given the refusal to allow in government critics like Fishman, some see that line of reasoning as implausible.

“This was a political decision,” Kotrikadze told Mtavari Arkhi. “I see it very clearly that Georgian government is trying to tell Moscow: ‘look, we are not letting some people in for your sake’.”