A new lawsuit helps illustrate how pages try to evade transparency initiatives – and how those interested in spreading disinformation can exploit gaps in the American legal system. 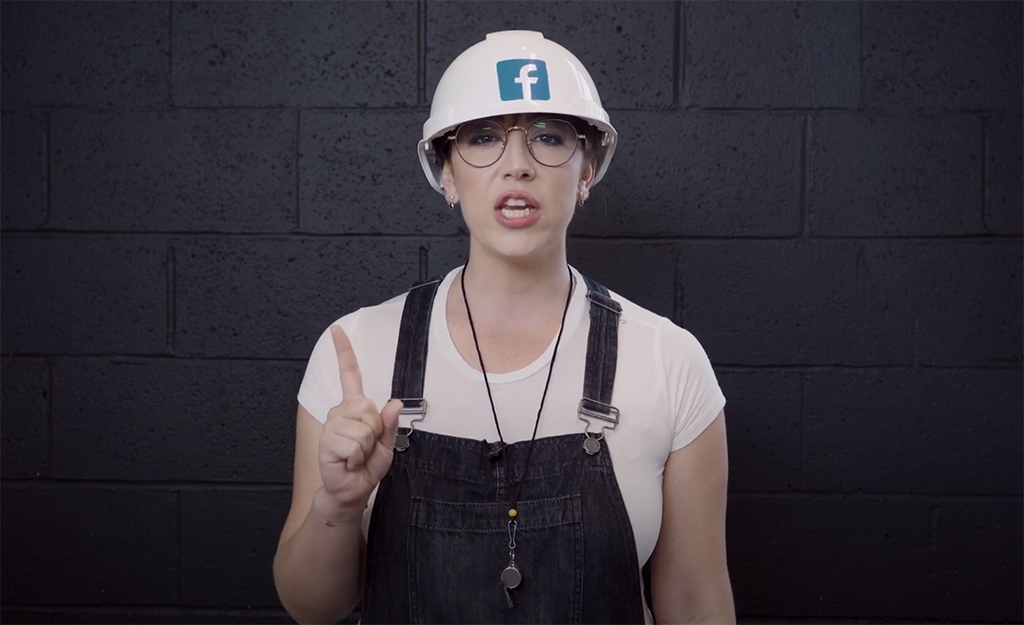 Anissa Naouai in a screengrab of a Soapbox video.

Facebook and other tech giants are intensifying efforts to discourage social media manipulation, ostensibly to better protect the integrity of the American electoral process. But legal loopholes are prompting at least one online publisher to play a game of cat-and-mouse with the new transparency measures.

In the lead-up to the 2016 U.S. presidential election, hundreds of Russian-government associated Facebook pages and accounts proliferated on the platform, but the most popular of the bunch topped out with a few hundred thousand followers. Now, with the 2020 vote just over two months away, pages that Facebook has linked to the Russian state have a vastly larger readership.

The most popular page, called “In the Now,” has nearly 5 million individual followers and remains operational, covering social flashpoints like police violence, racist trolls and punch-ups over masks. In an attempt to prevent a repeat of 2016, Facebook in June started alerting users about the affiliation of some media pages with foreign, state-controlled interests. The “In the Now” page was among those labeled a Russian “state-controlled” media outlet.

“This publisher is wholly or partially under the editorial control of a state,” the Facebook disclaimer reads. Every post from the page also now includes the disclaimer.

But the Facebook measure is generating pushback. Specifically, on July 29 Maffick LLC, the parent company of “In the Now” and a number of related pages, filed suit against Facebook in California. (As the “In the Now” Twitter feed announced: “We’re suing Facebook, bitches!”) The 17-page suit launches a raft of allegations against Facebook, ranging from defamation to intentional interference with Maffick’s contracts. The suit also seeks a jury trial, which would include full public disclosure of information deemed pertinent to the case.

Maffick’s suit isn’t the first time Facebook has been taken to court over its efforts to crack down on Kremlin-linked pages. In 2019, a California judge tossed out a similar lawsuit from the Russia-backed “Federal News Agency,” asserting that Facebook retains broad rights as a private company over how it treats content from outside parties.

On its face, Maffick appears likely to face a similar outcome. Facebook, after all, remains a private company, largely free to treat content on the platform as it wishes – including when it comes to labeling pages and accounts that it has identified as being linked to foreign operations, as was the case with the 2016 pages tied to Russia’s Internet Research Agency.

However, the new suit helps illustrate how pages can try to evade transparency initiatives – and how those interested in spreading misinformation/disinformation can exploit gaps in the American legal system to sow confusion among unwitting readers, especially in the United States.

First, a bit of background about Maffick. A 2019 CNN investigation discovered that the majority stakeholder of Maffick Media – the entity that controlled “In the Now,” as well as pages called “Soapbox” and “Waste-Ed” – was Ruptly, a subsidiary of Kremlin-funded RT. Maffick Media’s minority stakeholder was Anissa Naouai, the company’s CEO and a long-time employee of RT, which initially launched “In the Now” as its own nightly show. “In the Now,” as BuzzFeed reported, transitioned into a “standalone project” in early 2016, but still retained an ethos of “news served hot with a side of smile and a big dollop of propaganda.”

Facebook removed the Maffick pages following the CNN investigation. Shortly thereafter, the pages returned with a disclaimer, noting that they were a “brand of Maffick which is owned and operated by Anissa Naouai and Ruptly GmbH, a subsidiary of RT.”

During the summer of 2019, Maffick abruptly removed that disclosure from its pages. “They didn’t notify us, but we were aware,” Nathaniel Gleicher, Facebook’s head of cybersecurity, said recently in an interview.

In its stead, the company posted a new disclosure: “Maffick is a Delaware limited liability company owned and operated by Anissa Naouai.” According to corporate records, in July 2019 a new Delaware company, Maffick LLC, was registered. Per related legal filings in California, the only member of the LLC is Naouai, who is a U.S. citizen.

While Naouai retained Maffick branding, the lawsuit claims the new LLC doesn’t receive any funding from Ruptly, or from any other Kremlin-connected source. Instead, the lawsuit claims that Maffick’s “sources of funding and revenue” are now “monetization of media content, advertising for branded content that is promoted on its social media channels, and the re-sale of original content that is created for its channels.” It is unclear whether those companies are aware of Facebook’s new labels; neither Maffick nor Maffick’s lawyers responded to Eurasianet’s questions, and there are no public reports of any other income for Maffick.

Maffick now claims that it is an independent “social media and e-commerce company.” At the same time, the pages’ content – which includes, as the lawsuit noted, “lessons we can learn from indigenous people about connectedness” and “a video of Nelson Mandela responding to a reporter who was critical of him” – remains largely unchanged from a year ago, when the pages were identified as being bankrolled by a Kremlin-connected entity.

In addition, Maffick says it still maintains an undisclosed number of employees in Moscow, and its “Soapbox” pages specifically note that they are “affiliated with RT.” The host of “Soapbox” was also an employee of a separate Russia-funded outlet, who had previously described Russia’s invasion of Ukraine and Georgia as something that “could be viewed as defensive interventions provoked by NATO.”

Facebook has repeatedly asserted that its labeling policy for pages like “In the Now” isn’t entirely tied to funding. “‘State-controlled media’ is a very intentionally chosen term for us,” said Gleicher, the Facebook cybersecurity executive, adding that Facebook consulted with over five dozen experts when framing its new labeling policy. “We’re not looking just at funding. [...] Funding is a signal of control in some cases, but sophisticated actors can get around this.”

Instead, Facebook’s labeling decision involves a range of factors: ownership structure, editorial decisions and policies, information about newsroom staff, and others that Facebook has laid out publicly. One of Facebook’s court filings in the new Maffick lawsuit also details the “deep ties” between Maffick and RT.

“We want people to know if the news they read on Facebook is coming from a publication we believe is under the control of a government and we’ve made public the criteria we use to make this determination,” a Facebook spokesperson told Eurasianet. “This lawsuit is without merit and we will defend ourselves vigorously.”

There are also other moves to come. Gleicher said Facebook will begin blocking ads from such accounts aimed at American audiences and will also roll out such disclosures on related Instagram accounts soon. (These Instagram accounts are set to include the “Redfish” page, which purports to be an independent, community-based information initiative, but which has been found to have roots in the Russian government’s media machine.)

But the Maffick lawsuit also illustrates the limits of Facebook’s initiative, or any labeling effort for that matter. The existence of legal loopholes can help mischievous actors evade transparency measures. For years, the U.S. has acted as the greatest provider of anonymous shell companies in the world, thanks to states like Delaware – a reality that has now extended to the social media disinformation space.

“There will always be layers of shell corporations that are going to be difficult to pierce – there will always be entities that will find ways to hide who they are,” Gleicher said. “I think there’s a point where we just won’t be able to pierce these shell companies, and quite frankly that’s a reality of the choices we’ve made across society.”

Legislation banning the formation of anonymous American shell companies keeps moving forward in Congress. Such legislation, if enacted, would make it more difficult for suspicious media outlets to hide their origins and dump disinformation into the public discourse.