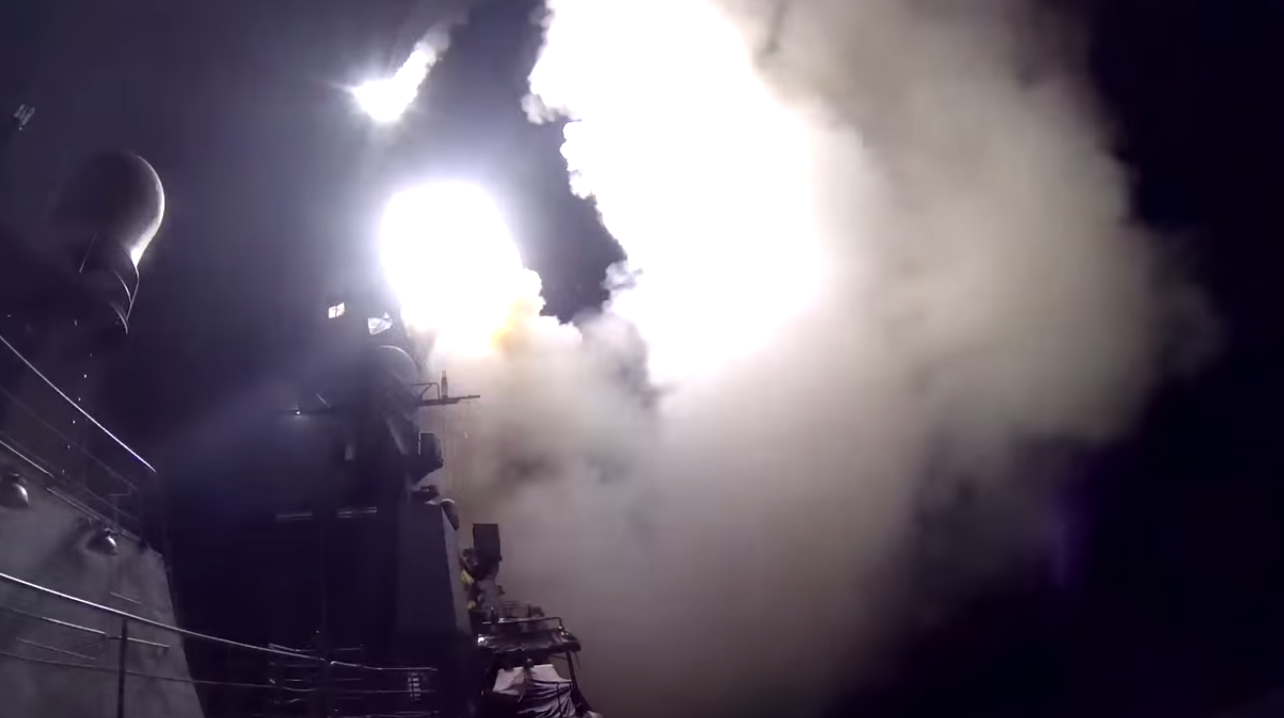 Screenshot of Russian MoD-produced video of strikes against Syrian targets fired from ships on the Caspian Sea.

Russian cruise missiles launched from ships on the Caspian Sea have struck targets inside Syria, adding a dramatic exclamation to what had been a slow, quiet militarization of the sea.

The strikes took place Monday and Tuesday and were announced with great fanfare on Wednesday, including comments from Russian President Vladimir Putin and a slickly produced video detailing the strike.

In total, 26 missiles were fired against 11 targets inside Syria from four ships from Russia's Caspian Flotilla. The 3M14 Kalibr missiles were used in combat for the first time, Russian defense industry sources told news site Lenta.ru. They flew over Iranian and Iraqi airspace en route to Syria, and Defense Minister Sergey Shoigu emphasized that Russia had gotten permission beforehand from those "partners."

Putin's comments praised the soldiers and military staff involved the strikes, but also Russia's defense industry. "The fact that these strikes were carried out using high-precision weapons launched from the Caspian Sea’s waters, around 1,500 kilometres away, and all of the planned targets were destroyed is evidence of our defence industry’s good preparation," Putin said. The strikes, and the large amount of publicity they were given, likely served two interests: demonstrating the Russian military's ability to strike from a long distance, and demonstrating the ability of Russian weaponry -- a key element in Russia's strategy for economic recovery -- to carry out such strikes.

And so there likely was no particular significance given to the fact that the missiles were fired from the Caspian qua the Caspian; it was just a convenient site. Nevertheless, it is a vivid illustration of what the Caspian's militarization might mean, and Russia's neighbors along the sea are no doubt wondering: what does this mean for us?

Since the fall of the Soviet Union, the sea's two traditional powers -- Russia and Iran -- along with the three newly independent states -- Azerbaijan, Kazakhstan, and Turkmenistan -- have all been slowly building up their navies on the sea. Russia's role in this is ambiguous: it partners with all the fledgling navies for exercises and training, but it is also the sea's hegemon and the smaller states don't want Moscow to be able to call all the shots on the sea. Azerbaijan and Turkmenistan, for example, want to build a gas pipeline across the sea, which Russia strongly opposes; relative naval might is no doubt in the backs of the minds of all those planning such a project.

This is the environment in which Russia carried out those strikes. Among the regional reactions, particularly noteworthy is the fact that the event does not seem to have been reported much, if at all, in Kazazkhstan's media. A search through some of the major news sites (TengriNews, KazInform, KazTag) showed no stories about the Caspian launch.

Azerbaijani and Iranian media did cover the strike, and Azerbaijan's state-friendly Trend.az even carried a glowing commentary. The strike "was an effective demonstration of Russian military power, including on the Caspian," wrote the analyst, Elmira Tariverdiyeva.

"Moscow, controling more more and more territory in the region, is ready to challenge the United States's traditional air dominance in the Middle East," the commentary continued. "And the Russian alliance with Iran -- another Syrian ally which can provide its airspace to Russia -- will play not an insignificant role in this." There is no mention of what Azerbaijan's role in all this is, however, or what effect it might have on the Caspian security picture.

It's also worth noting that while earlier monitoring of Russian flights to Syria suggested they were avoiding Azerbaijani airspace, one flightspotter noticed a Russian military flight on October 5 that appeared to go over Baku. A report in Russian newspaper Kommersant said that while some Russian flights avoid Azerbaijani airspace, others don't. (It gave no explanation for the distinction.) Does this mean that Azerbaijan is at least partly cooperating?

Regardless, this is an event that will long remain in the minds of the Caspian's various naval strategists.