Baku responded with a lawsuit and international arrest warrant, accusing the lawmaker of “terrorism” and “open calls of war.” 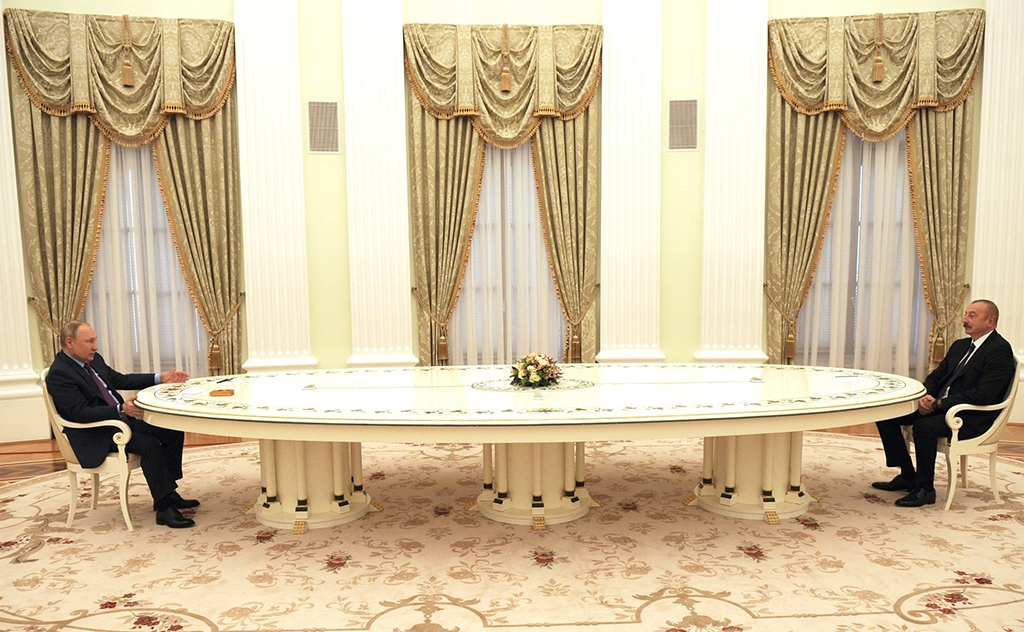 Azerbaijan has launched a criminal case against a member of Russia’s parliament who threatened the country with nuclear war.

Mikhail Delyagin, the deputy chair of the Duma’s Economic Policy Committee, came to the attention of Baku while he was on a March 27 panel discussion on Russia’s state television devoted to recently heightened tensions between Armenia and Azerbaijan. Delyagin said that Azerbaijan was to blame for violating the ceasefire and refusing to withdraw from a village it had advanced into, in contravention of demands from the Russian peacekeeping mission in Karabakh.

Delyagin called Azerbaijan a “satellite of the Americans” and a “Turkish proxy” that represented “a real threat.” He continued: “If we don’t directly and harshly punish Azerbaijan for this, why do we need Azerbaijan’s oil and gas industry? We don’t. If people don’t understand words, then maybe we need to take action.”

Following the broadcast, Delyagin then posted a poll on his Telegram channel asking followers if it would be justified to “destroy Azerbaijan’s oil industry with a nuclear weapon.” About 28 percent of the respondents said, “Yes, the Turkish proxies in Baku will not understand anything else,” and a further 13 percent said, “Yes, but it’s impossible due to the influence of the Azerbaijani mafia on the Russian authorities.” (The other option was “No, this is unacceptable.”)

Delyagin’s comments were swiftly condemned by senior Russian officials. “Russian politicians need to refrain from making emotional statements about Nagorno-Karabakh, where Russia is making great efforts to normalize the situation,” Dmitriy Peskov, the spokesperson for Russian President Vladimir Putin, told reporters on March 29. “This statement in no way corresponds and cannot correspond to the official line of the Russian Federation. It is rather a statement that lies in the plane of personal emotions that went too far,” he added.

The Ministry of Foreign Affairs spokesperson Maria Zakharova followed with a similar statement. Russia “aims at building allied interaction and strategic partnership with Baku,” she said. “We are confident that such provocative statements will be given an appropriate assessment.”

Delyagin then apologized himself, sort of.

He acknowledged that Peskov was right and that he needed to “moderate” his emotions. But he nevertheless blamed “a certain part of the Azerbaijani bureaucracy” who thought that “as the Russian military is distracted by the special operation [in Ukraine] it may neglect its peacekeepers.”

The apology didn’t mollify the Azerbaijani authorities, and on March 30 the country’s General Prosecutor’s Office launched a criminal case against Delyagin on charges of “open calls to start an aggressive war,” “terrorism,” and “cultivation of hate and hostility on national, racial, social or religious grounds.” The prosecutor also asked Interpol to issue an international search warrant for the lawmaker.

“At the same time, appeals were sent to the relevant authorities of a number of partner countries to ensure that the accused is immediately detained and transferred to Azerbaijan for investigation when entering the territory of those countries,” the press release from the prosecutor’s office read.

Azerbaijan’s embassy in Moscow posted a statement on its website condemning Delyagin’s remarks, with references to Peskov’s statement and another from Oleg Sheyin, another Russian MP, who also had condemned his colleague’s choice of words.

“It is clear that political clowns like Delyagin make crazy statements based on instructions received from the Armenians,” the piece read. “But the position of the Russian state channels causes surprise and regret. Do they really not understand that they are serving to spoil the relations of Russia with Turkey and Azerbaijan?”

Azerbaijan’s leading opposition figure and chairman of the Popular Front Party Ali Karimli interpreted Delyagin’s words as illuminating the intent of the Russian government. “Of course, it doesn’t mean his threat will be realized. However, through these threats, we also find out what our northern neighbor thinks and can think about us,” Karimli wrote on Facebook.

Just days before Russia launched its invasion of Ukraine, Moscow and Baku signed an alliance pact. But the newborn alliance has been challenged by the war, in which Baku has shown clear sympathies with Kyiv – gaining praise from Ukrainian President Volodomyr Zelenskiy – while still muting its criticism of Moscow.

But anti-Russia sentiment has run strong in Azerbaijan since the start of the invasion and Russia has blocked two Azerbaijani news websites, haqqin.az and minval.az, both known for their anti-Russian stance and run by prominent journalist Eynulla Fatullayev. Two other pro-government news sites, Baku.ws and Oxu.az, also have been banned in Russia since the war started.