The ongoing blockade has exposed the vagueness of the peacekeepers’ mandate, an uncertainty Baku is seeking to exploit. 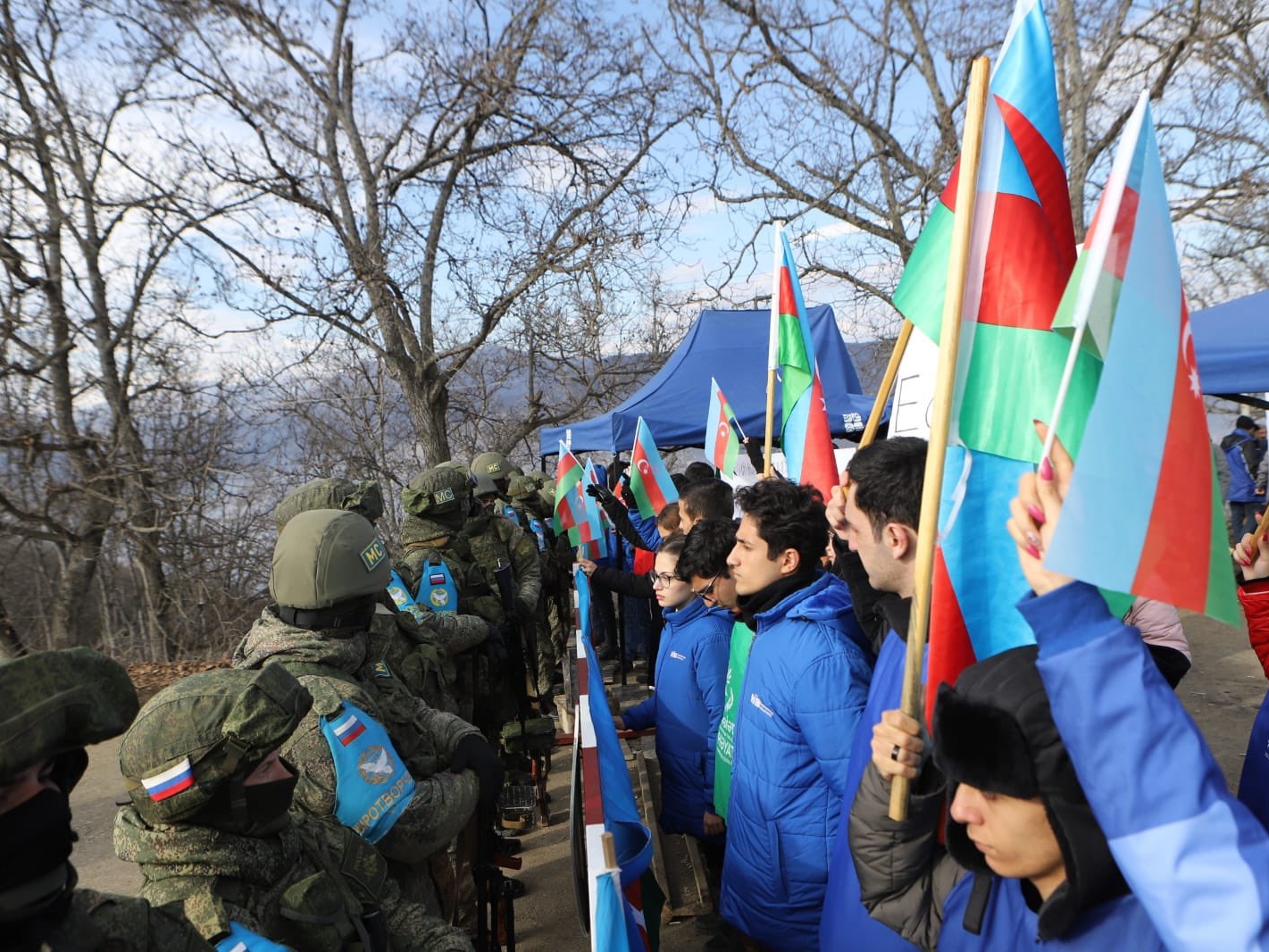 As the blockade of Nagorno-Karabakh drags on, the performance of the Russian peacekeepers charged with providing security on the road in and out of the territory is coming under closer scrutiny than ever before. And the reviews, from all sides, have been scathing.

Under the harsh spotlight of the constant coverage by pro-government Azerbaijani media, the peacekeepers have appeared uncertain of how to manage the belligerent protesters that have managed to shut down the road for four days and counting. On some occasions the Russians are easily pushed around by the protesters and reporters, on others they lose their patience and lash out.

The performance has only deepened skepticism of the Russian peacekeeping mission on both sides.

For Armenians, the episode has confirmed the Russians’ impotence in the face of Azerbaijani pressure. Baku has been steadily ratcheting up pressure on Yerevan to sign a comprehensive peace agreement that would restore Azerbaijan’s control over Karabakh, and their challenges to the peacekeepers have become sharper as the Russian military has gotten bogged down in Ukraine.

For Azerbaijanis, the crisis has only confirmed that the peacekeepers harbor pro-Armenian sympathies. Azerbaijani officials and media have long accused the peacekeepers of having comradely relations with the de facto government in Nagorno-Karabakh, which Baku regards as an illegitimate separatist entity.

The peacekeeping presence dates from November 2020, when the Russia-brokered agreement that ended the Second Karabakh War stipulated the deployment of 2,000 Russian soldiers to monitor the ceasefire. The peacekeepers were also to “control” and “protect” the Lachin Corridor, the only road in and out of the Armenian-populated territory.

Beyond that, though, there was no detailed mandate for their presence and little agreement on what the peacekeepers were supposed to do. In the initial stages of the post-war period, that was largely a theoretical problem. The Russians patrolled the territory, helped clear land mines and assisted locals in a variety of small humanitarian missions.

“So far, no party to the conflict has pushed back on the broad range of activities taken on by Russian peacekeepers,” the International Crisis Group wrote in a November 2021 report. “However, experience from other conflict zones suggests this could quickly become an issue in the event of an escalation in tensions: in that scenario any disparity between the two sides’ visions of Russia’s role will come sharply into view.”

In the current crisis, that warning has been proven prescient.

Since December 12, a group of Azerbaijani government-sponsored activists have effectively closed off the Lachin Corridor, holding a non-stop protest demanding that Azerbaijani officials get free access to mines that they claim Armenians have been illegally exploiting. The standoff has virtually marooned the Armenians of Karabakh, who have begun to ration food and fuel as the protesters appear ready for the long haul.

Azerbaijanis argue that nothing in the 2020 ceasefire agreement gives the Russians the right to prevent them from entering Nagorno-Karabakh, which is internationally recognized as Azerbaijani territory. And yet, the peacekeepers have refused to accede to the Azerbaijanis’ demands to be allowed into the territory.

A video report on the protests by the news site Caliber.az, which is connected to Azerbaijan’s Ministry of Defense, enumerates the modest, vague list of responsibilities given to the peacekeepers, contrasting it to a number of episodes in which Russian peacekeepers interfered with Azerbaijani journalists’ coverage of the protests, including hitting a media car with a rifle butt and tearing down a tent. On other occasions Russian peacekeepers have knocked microphones out of reporters’ hands or shone spotlights into the lenses of TV cameras. “What gives you the right?” the narrator asks.

As international condemnation of the blockade has grown, Azerbaijan has sought to shift the blame on to the Russians.

Azerbaijan’s Foreign Ministry has argued that it is not their side, but the Russian peacekeepers who have blocked the road. (The Russians have, indeed, blocked traffic from getting close to the scene of the protests in an apparent attempt to stop clashes.) Azerbaijanis at the protests say they are willing to let Armenians through, but that the Russians and the de facto Karabakh leadership are preventing it.

Armenians, meanwhile, have accused the peacekeepers of neglecting the spirit of their mission, which is to ensure the security of the ethnic Armenian population in Karabakh.

“Azerbaijan is more and more testing the red lines, checking for the Russian peacekeepers’ weaknesses and is trying to see how far this kind of pressure can go,” analyst Alexander Iskandaryan told the news site CivilNet. “The only limit on Azerbaijan is the Russian reaction, which Azerbaijan is constantly testing, and it sees that there has not been any kind of reaction that could stop this. So that’s why this is happening.”

The peacekeepers “have been on duty there for over two years already and in a way should know their tasks,” said Olesya Vartanyan, an analyst at the International Crisis Group and one of the authors of the 2021 report.

“They are doing now what they have been doing since they got deployed to the region,” Vartanyan told Eurasianet. “The issue now is that they are in the center of a crisis with people from different sides eager to criticize them: Armenians in Nagorno-Karabakh might expect the peacekeepers to remove people who are blocking the road; protestors might attach different hopes to the mission.”

There are complaints not just about the peacekeepers’ passivity on the ground but the relative silence from political leaders in Moscow. While several foreign governments called on Azerbaijan to lift the blockade, four days into the crisis Russia had yet to follow suit.

“At the moment the United States, European Union, France have already issued statements, and according to our information Russia is also preparing a similar statement, which the Armenian people have been waiting for for a long time,” speaker of parliament Alen Simonyan said on December 14. “We hope that this time our partners will not disappoint us.”

On December 15 Moscow did finally address the issue. While it stopped short of blaming Azerbaijan for the blockade, it did hit back at criticism of the peacekeeping mission.

“It is unacceptable to create problems for the lives of the civilian population,” Maria Zakharova, spokesperson for the Russian Foreign Ministry, said in a statement, adding: “Accusations against the peacekeepers are unacceptable and counterproductive, the Russian peacekeeping mission is effectively carrying out its duties acting as the guarantor of stability in the region.”

Indeed, it may be that the crisis has only strengthened the case for the peacekeepers’ presence.

“The key here is that without the peacekeepers it could be even worse. They are still in a way helping to sustain this shaky stability on the ground,” Vartanyan said. “The mission finds itself in a difficult situation, because, with the current crisis in Ukraine, it is not easy for those in the West to support the Russian presence in Nagorno-Karabakh. This has been a very isolated mission, that has almost no contacts with international organizations, not to mention foreign governments,” she said.

Challenging the peacekeepers may turn out to backfire for Baku.

“If Baku engages in good faith with local Armenians, this would reduce the risk of potential spoilers of a peace agreement,” Zaur Shiriyev, another analyst at the International Crisis Group, told Eurasianet. “Each new escalation, either military or non-military, aggravates the fresh wounds from the 2020 war. This diminishes hopes for a sustainable peace at the societal level and strengthens radical elements in both societies.”

In that context, Shiriyev said, the blockade “is a very unproductive move. It strengthens the Armenians’ argument that Baku will not provide security and safety if they were integrated into Azerbaijan.”