What appears to be a black PR campaign is painting Armenia's new leadership as hostile to Russia. 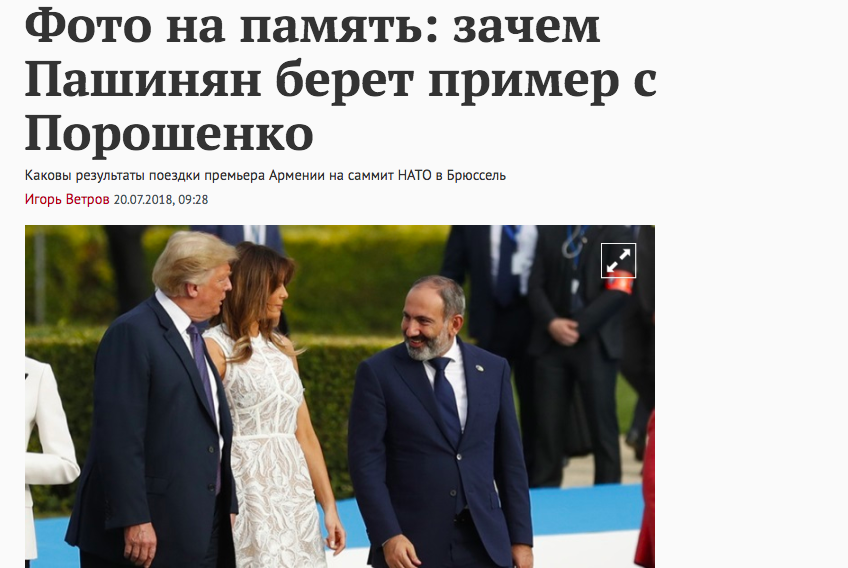 Russia appears to have stepped up its information war against the new government in Armenia, with a pair of analytical essays on prominent websites painting newly elected Prime Minister Nikol Pashinyan as a unfaithful ally of Moscow. The two pieces have been seen in Yerevan as a black PR campaign and a not-very-veiled threat from the Kremlin to quit flirting with the West.

The two stories appeared last week, one on July 19 on the portal Lenta.ru, and the other the following day on Gazeta.ru. The two outlets are both owned by the same media group and both pieces (at least one by a pseudonymous author) covered similar talking points.

Both pieces belabored a comparison between Armenia and Ukraine; the Lenta piece suggested that Pashinyan is a “carbon copy” of Ukrainian President Petro Poroshenko, a grave insult in the Russian media narrative. “This is all the more regrettable in that until very recently Yerevan was very loyal to Moscow,” the piece continued. “Now, the future prospects of bilateral cooperation must be deeply reconsidered. And these reconsiderations promise nothing good.”

Both profile the most Western-oriented members of Pashinyan's new team, for example Minister of Culture Lilit Makunts. She until recently worked for the U.S. Peace Corps, which Lenta claimed “is well known to be connected to the CIA.” And both portrayed Pashinyan's visit to Brussels as a sniveling attempt to ingratiate himself among and debase himself to the Western leaders in attendance, both telling the same anecdote about Pashinyan pathetically chasing after U.S. President Donald Trump to get a handshake and photo op. And so on.

It's impossible to know what role precisely the Kremlin played in this информационный вброс, as Russians would call it (roughly translatable as “information implant”), but it comes at a time of unmistakeably heightened tension between Yerevan and Moscow.

Pashinyan's visit to Brussels, while maybe not quite as obsequious as these pieces would have it, was striking for the warm reception he got in the halls of NATO and the strong claims he made for Armenia to be part of the West (along with requests for more economic aid and security support from Western countries). While he reiterated that he did not intend to make any geopolitical moves away from Russia – Armenia is a member of both the Russia-led Collective Security Treaty Organization and Eurasian Economic Union – those assurances are beginning to sound rote and not particularly sincere.

Immediately following the Brussels visit was a mysterious incident involving a military exercise by Russian troops based in Armenia, in which Russian soldiers fired (albeit with blank ammunition) in the village of Panik, panicking locals and putting the controversial presence of the Russian base back on Armenia's public agenda. Russian officials apologized and said it was an accident.

Armenia's public statements on the episode have been inconsistent. Pashinyan called it a “provocation” aimed at damaging Armenia's sovereignty, but Defense Minister Davit Tonoyan took on some of the responsibility himself, saying that the Armenian side had been notified of the exercise ahead of time. But Tonoyan also said that Yerevan was looking at renegotiating the base agreement with Russia, which as it stands now is in force until 2044 on terms very advantageous to Russia.

“This isn't a document carved in stone, and with time some problems emerge which require legal-contractual changes,” Tonoyan told local news site 1in.am. “And of course that will be done. The recent incident in Panik can be an impulse for some changes, but I can't say for certain now.”

Meanwhile, Pashinyan also suggested that he is relying on Moscow to keep Azerbaijan from trying to rekindle a war over Nagorno-Karabakh, the territory that both sides claim and which is now controlled by Armenian forces.

“I am convinced that Russia has all the levers to prohibit escalation in the region,” he said at a July 20 press conference. “I cannot believe that Russia, Armenia’s strategic partner and centuries-old friend, will allow the resumption of war in the region. I cannot even believe that Azerbaijan would dare carry out any instigation or activity without the existence of geopolitical conditions. We must all be more sincere and zealous regarding our treaty obligations.”

It's difficult to know what to make of all this, except that the tacit, tenuous agreement between Yerevan and Moscow – that neither side would make an issue of geopolitics following Pashinyan's rise to power – looks like it's starting to fall apart.

This could be happening regardless of whatever Pashinyan might do in Brussels or with the Russian military base in Armenia. To the extent that his anti-corruption campaign is successful, it could weaken Russian business interests in the country.

“In Moscow they understand perfectly well that ... the institutional reforms now underway in Armenia, and the foreign policy that rests on them, day by day further integrates the country in the so-called Western system,” wrote commentator Sargis Artsruni, in a piece on the Russian information implant. “Even if today this doesn't have what you would call a civilizational direction, in the future it will become a practical policy. This is the reason for the deep Russian hysteria.”

Whatever the case, a public campaign equating Armenia to Ukraine – where Russia is supporting a separatist movement in the east and has annexed Crimea – promises, as Lenta might put it, nothing good.