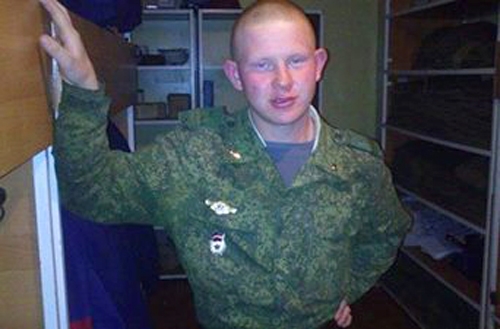 Valery Permyakov, a Russian conscript soldier suspected of killing six members of a family in Gyumri, Armenia, in a photo released by the Armenian authorities.

A Russian soldier is suspected of killing six members of an Armenian family after deserting his guard post.

In the early morning hours of January 12, six members of the Avetisyan family were shot and killed in their home. The suspect, Valery Permyakov, was a conscript soldier serving at Russia's 102nd military base in Gyumri, Armenia's second city. Thus far, the authorities have not explained what connection Permyakov had to the family. By evening Armenia time, Permyakov remained at large.

Permyakov's boots, imprinted with his name, were reportedly found at the scene of the crime. Permyakov is from Chita and had earlier served at a military base there, where he tried to escape, one of his fellow soldiers there told newspaper Moskovskiy Komsomolets, adding that Permyakov was a "normal, friendly guy."

Russian defense minister Sergey Shoigu called his Armenian counterpart Seyran Ohanian and expressed his "deep condolences for the family and loved ones of those killed," emphasized that "nothing can justify this kind of violence against innocent people," and promised "all possible help and support of the family of those killed," RIA Novosti reported. Russia's MoD also formed a commission, headed by First Deputy Minister Arkady Bakhin, to investigate the crime.

The 102nd base hosts about 5,000 Russian soldiers, both land and air forces. In 2010 Armenia and Russia signed an agreement extending the base's lease until 2044. That was unpopular among some in Armenia, particularly Western-leaning liberals, who argued that the base agreement gave Russia too much control of the country. Crimes committed by foreign servicemen can easily become cause celebres by those who oppose a base's presence, and it appeared Monday that both Russian and Armenian figures from across the political spectrum were quickly trying to tamp down any sort of anti-Russian or anti-base sentiment that the crime might engender.

"When you write about a man who killed six innocent, sleeping people, including two children, you shouldn't fixate on the fact that he is Russian or a Russian soldier. You need to find out all the facts that could have resulted in this horrible crime," said Tevan Poghosyan, a member of parliament from the pro-Western Heritage party. "In my personal opinion, this should not be the cause of any anti-Russian sentiment," added Avetik Ishkhanyan, head of the human rights organization Helsinki Committee of Armenia.