The lack of information about the case, nearly two weeks after the 57-year-old woman’s death, has given rise to speculation among Armenians. 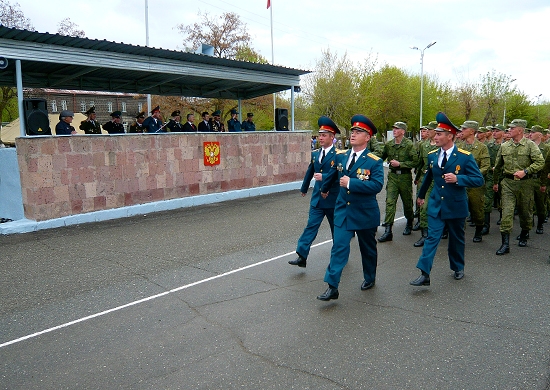 Soldiers at Russia's 102nd Military base in Gyumri, Armenia, prepare for a parade in 2015. A soldier from the base is suspected of killing a local woman. (source: mil.ru)

A 57-year-old street sweeper was beaten to death in Armenia’s second city of Gyumri, and a soldier from the Russian base there has been arrested in connection with the case.

On December 2, Julieta Ghukasyan died of severe trauma, Armenian authorities reported the next day. But since then, law enforcement bodies have been reluctant to make public any more details about the case.

Relations between the 102nd Military Base – Russia’s second-largest outside its borders – and the local community have been tense, particularly since one soldier, Valery Permyakov, killed six members of an Armenian family in 2015. That case led to protests against the base and a prolonged fight over which country’s judicial system would prosecute the case. At first Russian authorities tried to pursue the case in a military court on the base, but public protests forced them to back down and allow the case to be tried in an Armenian court. After Permyakov was convicted he was extradited to Russia to serve his sentence.

The Russian state-run news agency Sputnik Armenia, citing an unnamed source, reported that the soldier – who thus far has not been identified – was being held on the territory of the base in Gyumri and that the investigation was being conducted there.

The Armenian General Prosecutor’s office has refused to clarify the reports. Arevik Khachatryan, the spokesperson for the prosecutor’s office has said only that a Russian contract soldier has been arrested. The government has been silent on the case; the murder took place during the run-up to pivotal parliamentary elections.

The episode comes at an unhelpful time for Armenia-Russia relations, as the two sides are in the middle of a spat over the leadership of the Collective Security Treaty Organization, a post-Soviet security bloc, and a general mistrust between the two sides since the coming to power of Nikol Pashinyan and his team of pro-Western allies.

The Russian embassy in Yerevan on December 3 issued a statement criticizing the media for jumping to conclusions on the case and not respecting the presumption of innocence before the investigation is complete: “This kind of irresponsible behavior, especially in the difficult pre-election period, plays in to the hands of those forces who want to drive a wedge into the strategic and traditionally friendly relations between Armenia and Russia.”

While officials have been muted about the case, it has been covered heavily by Armenian media and has elicited outrage among many. “All boundaries have been crossed, why are people silent?” read one Facebook comment on the case. “In her home, on her homeland, an ARMENIAN MOTHER was killed.”

Ghukasyan’s daughter, in an interview with local media, said she didn’t know why her mother might have been attacked. “There is no one that would harm us like this. We did no harm to anyone to deserve this. What did my mother have to do a with a Russian soldier?” she said.

One opposition party, the strongly anti-Russian Sasna Tsrer, issued a statement on December 13 criticizing the government for its inaction around the case and compared it to the Permyakov controversy.

“If we remain silent and do nothing this time too, another tragedy will not be long in coming. Armenia’s self-governance and authority must be restored in the Armenian territory,” the party said, and called on the government to “take this tragic occurrence as the reason to at least begin revision of the terms and conditions of Russian military presence and turn that process into an opportunity to build dignified relations with Russia.”

One non-governmental organization, the Union of Informed Citizens, criticized the fact that the suspect was apparently being held at the Russian base. “The 102nd Russian military base in Gyumri is protecting the person suspected of committing a crime in Armenia from Armenian law enforcement authorities and from potential prison sentence in the Republic of Armenia,” the group said in a statement.

On December 14 the Russian embassy issued another statement, criticizing “a stream of emotional commentaries about the tragic incident in Gyumri” and calling on journalists to “not interfere with the work of the Armenian investigative organs.” It’s unclear if this suggests that the Armenian authorities are in fact investigating the case.