Russian-speaking students squeezed out of schools in Azerbaijan

A shortage of classroom spaces has reopened a debate in Azerbaijan: why do we still have Russian-language schools? 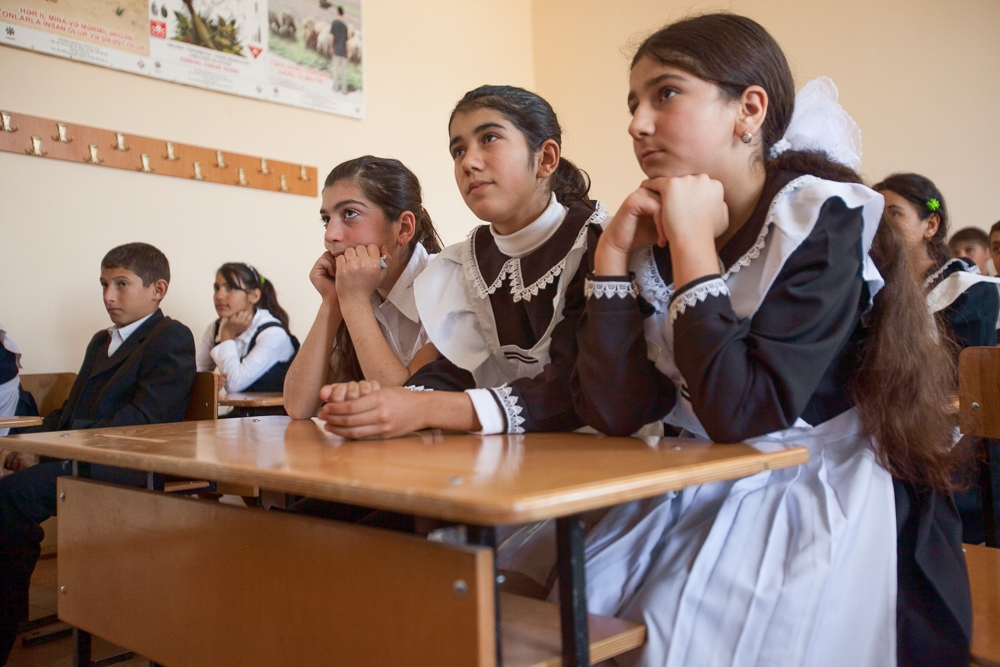 Students in an Azerbaijani-language school near Beylagan (David Trilling)

Six-year-old Ragimat Chubanova started school this year in a language she doesn't understand. Her mother is ethnically Russian, her father is Lezgin, and the family speaks Russian at home. Ragimat, who goes by Rima, “doesn't speak Azerbaijani at all and barely understands it,” said her mother, Marina Chubanova.

“She won’t be able to study in Azerbaijani,” Marina Chubanova said. “I hope she will be transferred back to the Russian sector,” as the Russian-language schools in Azerbaijan are known.

Rima's situation was not unique this year. While Azerbaijani is the primary language of education in the country, the Ministry of Education says that there are still about 340 primary and secondary schools teaching in Russian, attended by about 10 percent of Azerbaijan's student population.

This year, though, a shortage of spots in Russian-language schools caused consternation among Russian-language families. The scale or the cause of the shortage is not clear. But anecdotal information about the lack of spaces, including long lines at the Baku Educational Center, an office under the Ministry of Education that handles school enrollment, flooded social media.

The Azerbaijani service of the Russian state-run news agency Sputnik said that this year's problems were the continuation of a long-running trend in Azerbaijan. “Those who pass the exams to fill vacant spots [for Russian-language teachers] do not have impressive qualifications. As a result, education officials face a dilemma: either take on unqualified staff and intellectually destroy a generation, or reject them and take on an army of disgruntled parents.”

The Ministry of Education has not publicly commented on the shortage. Representatives from the ministry did not respond to Eurasianet’s requests for comment.

The controversy has reopened debate in Azerbaijan about whether, more than a quarter century after the collapse of the Soviet Union, the country still should provide education in Russian.

One member of parliament, Kamila Aliyeva, proposed requiring a fee for Russian-language education, spurring a wide public debate. Opponents noted that the country's law recognizes the right of all students to get a free education. Others wanted to go further: “Russian schools should be closed, and the language should be taught as a foreign language only,” education expert Nadir Israfilov said in an interview with local news site Oxu.az.

In 1989, during the last years of the Soviet Union, there were 392,000 ethnic Russians in Azerbaijan. That figure fell to 120,000 by 2009. While many ethnically non-Russian families use Russian as their first language, Russian proficiency in the country is declining. In 1994, 38 percent of Azerbaijanis reported speaking Russian fluently; in separate surveys more recently the number has declined to under 10 percent. The number of students studying in Russian-language schools dropped from 250,000 in the 1990-91 school year to under 100,000 two decades later, according to Russian government data.

Nevertheless, Russian-language education retains prestige even among non-Russian-speaking families, who believe the quality of education in Russian schools is better and that graduates of those schools have better job prospects.

One Azerbaijani-speaking parent, who sent her child to a Russian-language school, said she did so because of the demand for Russian in the workplace.

“In Azerbaijan, Russian is more in demand everywhere than Azerbaijani is,” she said. “Everywhere at work they require Russian. If you don’t know Russian, it is kind of a disadvantage. You will be offered a lower salary or a lower position,” she said.

“The quality of education in the Russian sectors is falling,” said Sergey Rumyantsev, a Berlin-based sociologist who studies education in Azerbaijan. “But it's also impossible to get a quality education in Azerbaijani. There are not enough quality textbooks, and only knowing Azerbaijan narrows your access to information and the world. [...] So it's clear why parents are worried.”

One school psychologist, who asked not to be identified, said that in her Russian-language school, more than 12 percent of the children don't understand Russian at all, and another 20 percent have only a very basic knowledge. Starting school in conditions like that badly hampers a child's education, the psychologist said.

“First grade is already a stressful period for children, and on top of that is a language barrier,” she said. “Such children are not active during lessons, they never go to the board, never communicate with other children, and have difficulties expressing themselves.”

The question of language inevitably becomes entangled in Baku's relations with Moscow. Russia sees Russian-language education around the post-Soviet world as part of its national interest, and the rights of Russian speakers in the region is often a cause of tension with the Kremlin.

Baku and the Kremlin have mostly avoided friction over the schools issue, but it is clear that Moscow is watching. Sputnik has been covering the issue extensively, and one op-ed proposed sending additional teachers from Russia to Azerbaijan, as Russia recently did for Tajikistan.

The presidents of the two countries have met twice in recent weeks. In late September Russian President Vladimir Putin traveled to Baku and publicly mentioned the status of the Russian language. “We see it and we highly respect the interest toward the Russian language in Azerbaijan. The language lives in people’s hearts and minds,” he said.