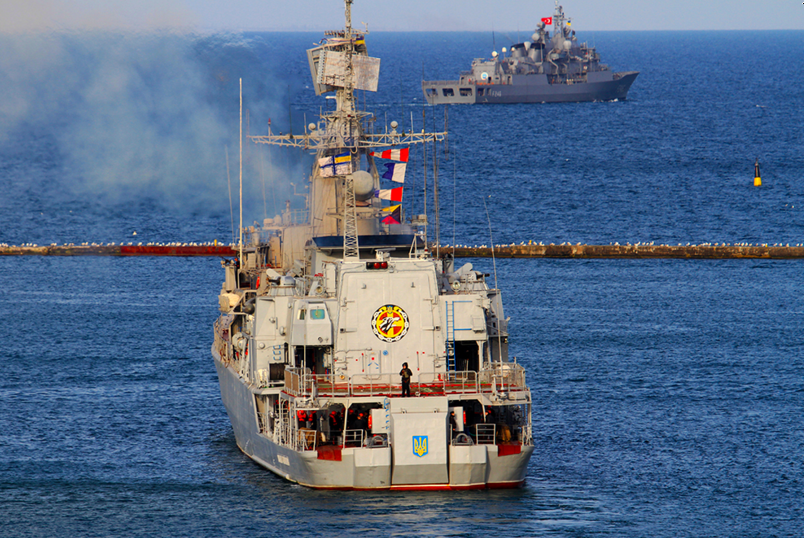 Turkey's naval ships have made simultaneous port calls to all the Black Sea countries except Russia, in an apparent military-diplomatic show of force as tensions on the sea continue to simmer.

As part of this year's iteration of the annual Deniz Yildizi (Sea Star) exercises, Turkish ships made port calls over last weekend to Batumi (Georgia), Varna (Bugaria), Constanta (Romania), and Odessa (Ukraine). These countries, all engaged in conflicts with Russia of varying severity, are increasingly finding common cause on the Black Sea. Turkey, though, is the only naval power with anything close to Russia's strength.

"The scope of the exercise shows that Turkish Navy intends to show a strong presence in the Black Sea," wrote Turkish naval blogger Can Devrim Yaylali. "This is an impressive way of showing the flag, an important message."

Along with the port calls, Turkish ships carried out joint exercises with the host ships. In Odessa, "The aim was to work out their interaction under the NATO standards, as well as increase the level of interoperability," the Ukrainian Minstry of Defense wrote. In Romania, Turkey also combined business with the port call, promoting a bid by three Turkish defense companies to refurbish two Romanian frigates.

Meanwhile, Romania continued to talk up its proposal to create a permanent NATO presence on the Black Sea. "The formula is to be opened to partners who aren’t members of the alliance, such as Ukraine or Georgia, as well as to NATO members who don’t border the Black Sea, yet are constantly present in Black Sea ports and take part in exercises — first of all, to the United States," Romanian Defense Minister Mihnea Motoc said in a newspaper interview. "It would be a strong signal to announce such an initiative during the Warsaw summit" which will take place in June, he added.

Russia -- the clear target of all this energetic cooperation -- made it known that it was watching all of this with interest. "The Black Sea Fleet's medium-class reconnaissance ship Ekvator is present in the vicinity of the district where the Turkish Navy is holding its exercises. One of its tasks is to monitor the course of the Turkish Navy's maneuvers," a Russian defense ministry source told Interfax.

As for the NATO Black Sea proposal, one Russian lawmaker was dismissive, suggesting that the whole thing was a scheme for Bucharest, Kyiv, and Tbilisi to attract money from the West. "Romania has a great wealth of experience extorting money from its strategic partners. While it was an ally of the Soviet Union, the country's leaders strenuously pushed for assistance from their 'big brother' to build socialism," said Vyacheslav Tetekin, a member of the Russian Duma's Committee on Defense, in a newspaper interview. "Now, with even more pressure, they are asking their new overseas patrons to give them more money for 'defense' against their former patrons. And in order to avoid the impression that they are asking only for themselves, they decided to drag Ukraine and Georgia into it."

Tetekin added a sort of backhanded compliment to the U.S. and to Turkey: "They have no interest in frittering away their resources on Romania or Georgia; they are not fools to invest money into such an obviously disastrous venture."