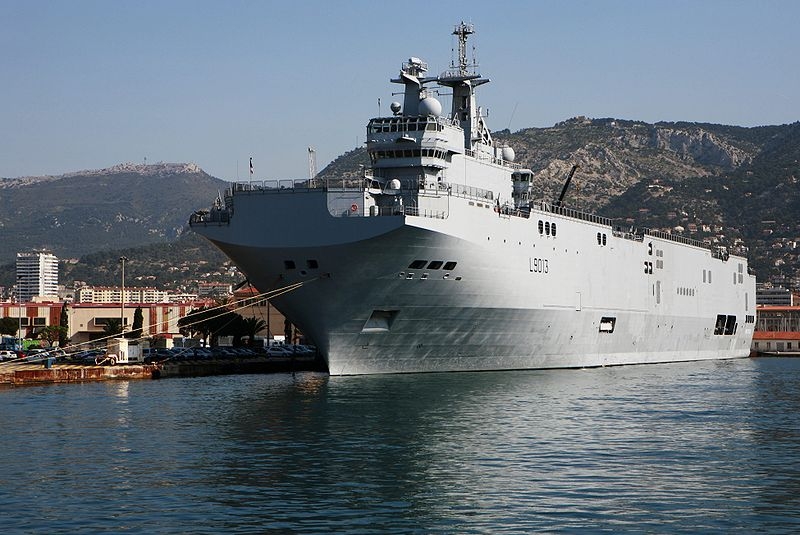 For those inclined to believe the worst about Russia's military intentions, there have been two recent developments that have aroused pundit ire: the possible sale of advanced French Mistral-class ships to Russia, along with the statement of Russia's top naval official that "a ship like this would have allowed the Black Sea fleet to accomplish its mission [invading Georgia] in 40 minutes and not 26 hours," and the new Russian military doctrine and its explicit designation of NATO as a threat.

The volume on the Mistral sale is bound to increase over the next few days, as France and Russia formally began talks today to buy not just one Mistral but up to four.

But RFE/RL has a perceptive analysis that suggests that the alleged aggressiveness of the doctrine is overblown, and that those two developments, in a way, blunt each other, that the Mistral sale in fact suggests a softer attitude toward NATO than Kremlin rhetoric can suggest:

The 600-pound gorilla hiding in the verbiage of the new doctrine is the question of how to arm the military with the high-tech weapons listed in the document. The Russian defense industry suffers from outdated plants, an aging work force, and the incompatibility of a system built by Josef Stalin with the realities of a market economy.

The new doctrine suggests that Russia somehow invigorate investment into innovative technologies and keep its independence as an arms manufacturer. While debating the best way to direct the Russian economy toward technological innovation, Russia's leaders appear to be moving away from defense industry autarky. During a meeting with Western experts on Russia last September, Prime Minister Vladimir Putin reportedly said Russia wanted to cooperate with Western nations in weapons manufacturing.

The doctrine, which designates NATO as a source of danger to Russia, appears to be in conflict with the emerging weapons acquisition policy: importing selected major weapon systems from NATO members. The plan to buy a Mistral helicopter carrier from France (and other possible suppliers were reportedly Spain and the Netherlands) is a clear indication that Russian leaders are frustrated with the inability of their defense industry to produce modern armaments. Russia may benefit from importing and coproducing weapons, but it may also have to adjust its foreign policy to the reality of dependence on Western suppliers.

Nothing in the new doctrine points to growing aggressiveness on the part of Russia either at the conventional or nuclear levels.