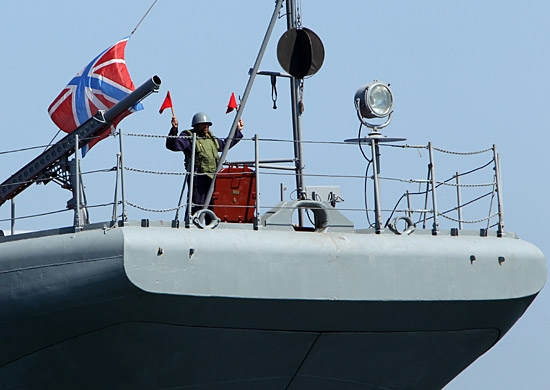 Russia's surprise, large-scale military exercises on the Black Sea are raising alarm among some of its neighbors. Russian President Vladimir Putin sprung the exercises on his military at 4 am Thursday and showed up in person, along with Defense Minister Sergey Shoigu, to observe the exercises on Friday. The exercises involve around 30 warships, 7,000 servicemembers and various armored vehicles and artillery.

But the Black Sea is a complex geopolitical environment: Russia's Black Sea Fleet is based in Sevastopol, in on-again-off-again ally Ukraine. NATO members Turkey, Bulgaria and Romania also have naval forces on the sea, as of course does Russia's foe Georgia. So the international response to the exercise wasn't entirely positive. As RT put it, "The Russian naval drills came as a surprise not only to the Russian armed forces, but also for neighboring countries’ militaries as well, which were forced to rub sleep from their eyes and rush to their duties as up to 30 Russian battleships left port."

Russian officials pointed out that there is nothing to prevent them from conducting these sorts of surprise drills. “According to international practice, exercises involving up to 7,000 people do not require us to inform our partners in advance,” said Putin spokesman Dmitry Peskov.

Nevertheless, the response from Tbilisi -- which suffered the wrath of the fleet during the 2008 war over South Ossetia -- was as negative as one would predict. The Georgian Ministry of Foreign Affairs issued a statement expressing its "grave concern":

Russia's action runs contrary to the interests of stability and predictability in the European neighborhood. Georgia is alarmed by the unexpected, provocative activity of the Russian troops, as well as by the potential use of the facilities, weaponry and/or personnel of the occupation forces of the Russian Federation within Georgia's internationally recognized borders in Abkhazia, Georgia and the Tskhinvali region, Georgia.

Still, Defense Minister Irakli Alasania added that "Georgia does not feel a direct threat from these exercises." (It's worth recalling that just a week ago, Russia's foreign ministry objected to U.S.-Georgian military exercises, in which 400 U.S. marines participated.

The Ministry of Foreign Affairs of Ukraine -- whose port of Sevastopol is the home of Russia's Black Sea Fleet -- didn't object, but some members of parliament did. And while Turkey didn't respond publicly, Turkish naval blog Bosphorus Naval News noticed that a Turkish submarine was heading to the Black Sea through the Bosphorus, noting that his "educated guess" was that is on its way to keep an eye on Russia's exercise.

There didn't seem to be any official response from NATO, either, but Kommersant talked to a NATO-member diplomat who wasn't happy about the surprise exercise. The diplomat noted that while technically Russia wasn't required to notify anyone, the surprise nature of the exercise still suggested bad faith:

The news of the unplanned, large-scale military exercise around the Black Sea was received abroad with some perplexity. A high-ranking diplomatic source in one NATO-member country told Kommersant that "Even if Russia isn't required formally to give any advance warning, still, partners don't act like this... NATO members always try to inform Moscow in advance about preparations for exercises, as we have agreed to strengthen mutual trust and transparency."

The surprise nature of the exercise is what alarmed neighbors, but that may have to do more with concerns about Russia's military readiness than with sending a message to potential foes. Recall that last month Russia conducted surprise military drills and many units' response was found wanting. Reports RT:

Spontaneous training missions such as this are apparently set to become routine in the Russian military. "If we recall the speech of the President at the Collegium of the Ministry of Defense some time ago, you remember his words that the similar practice of unannounced inspections will actively continue,” Peskov explained.

And of course, Russia's Black Sea resort town of Sochi will host next year's winter Olympics. So security for that, as much as anything related to Georgia or NATO, was likely on Putin's mind when he chose that venue.