In his first public appearance following his surprise return to the country, arrest, and hunger strike, the ex-president brushed off the charges against him and issued an expansive defense of his time in power. 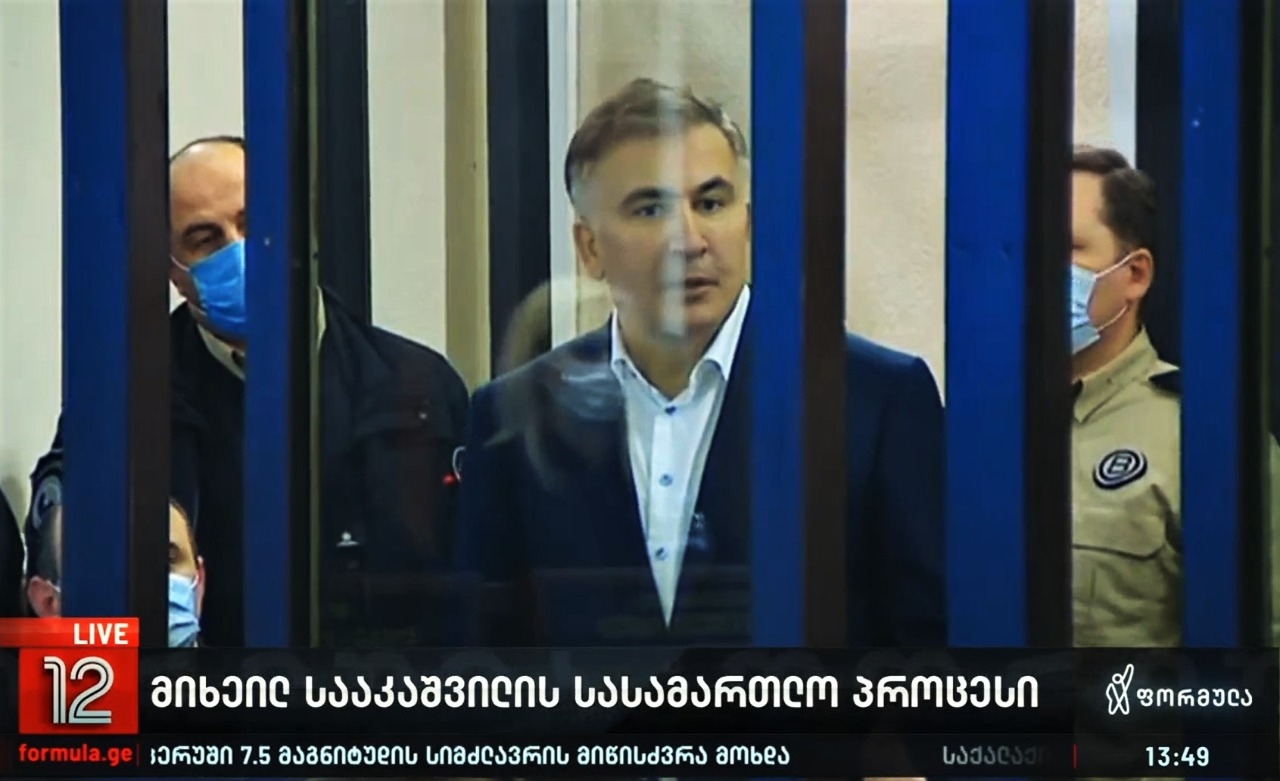 Once stocky and ruddy-cheeked, former Georgian President Mikheil Saakashvili looked a bit gaunt and pallid, his raven-black hair peppered with grey, when he showed up in court on November 29. But while incarceration and a prolonged hunger strike left a noticeable imprint on his appearance, Saakashvili seemed to have lost little of his kinetic energy.

From the moment he took the stand, Saakashvili was the star of the show, outshining – and outshouting – everyone else in the room, including the judge and his own attorney.

“My dear Georgian people, don’t you miss feeling proud for your country? Don’t you miss the thrill and the drive of development? Don’t you miss novelty and progress?” Saakashvili began, addressing both the few people allowed in the courtroom and the many more who were watching live on TV. “If you miss all those things, then we have to end this thing that is happening here now.”

What was “happening here now” was the spectacle that has gripped Georgian politics since Saakashvili made his surprise return to the country two months ago. He was arrested soon after on a variety of charges for crimes he was suspected of (and in some cases, already convicted in absentia) from his time in office from 2004 to 2012.

He declared the charges politically motivated and began a 50-day hunger strike, ending it only on November 19. His first chance to directly address the public since arriving in Georgia was the November 29 hearing, in a case related to his alleged abuse of power for commuting the punishment of security officials convicted of high-profile murder and a heavy-handed crackdown on an anti-government protest in 2007.

He was intent on making the most of it.

Brushing off the specific charges – he argued that he was in his right to commute the officials, and that the 2007 protest was a Russian plot aimed at overthrowing him – he used the bulk of his appearance to launch a lengthy defense of his time in power.

“We used to be number one economic reformer in the world,” Saakashvili said. Under the new government, led by billionaire Bidzina Ivanishvili and his Georgian Dream Party, “all resources belong to the oligarchy, or rather a particular oligarch, a single leader, while the people either live off remittances sent by their relatives from abroad or eke out a living serving the oligarch,” he said.

“And today, for everything we have achieved – built this very building, raised this flag, created this coat of arms, created a new anthem, and most importantly created a state and state institutions – I became the first Georgian leader in 400 years after King Luarsab to end up in prison,” Saakashvili said referring to a 17th-century Georgian monarch who was imprisoned and killed by Persians following a military defeat.

Toward the end of his j’accuse, which was occasionally interrupted by exchanges among the judge, prosecutor and attorney, Saakashvili did assume an apologetic tone. “Did I make mistakes? More than a few… My biggest mistake is this very court,” he said. While Saakashvili was largely credited with reforming, if not creating from scratch, many of the country’s law-and-order institutions, he also is blamed for allowing them to be controlled by the ruling political force.

“Lots of my countrymen paid the price for our failure to create an independent court, and I’m also paying the price for it,” he said.

Following the roughly hour-long speech, Saakashvili was escorted from the courthouse under heavy security that was forced to wade its way through a crowd of his supporters, some of whom had tussled with police while the hearing went on inside.

The speech was widely debated in the media, a discussion which – like everything else in the country these days – illustrated the deep divisions in Georgian society about Saakashvili, his political legacy, and the current ruling regime.

“Yesterday we saw a man who has no remorse,” said Sozar Subari, a Georgian Dream member of parliament. “We saw a man, who is a braggart and a blowhard,” Subari said, going on to compare Saakashvili’s trial to that of former Serbian leader Slobodan Milosevic’s at an international war crimes tribunal.

Independent parliament member and former Saakashvili ally, Salome Samadashvili, said that politicians should pay the price for their mistakes through elections. “Political vendettas need to end,” she said.