Saakashvili, Hasanov on the Russian Threat to Azerbaijan 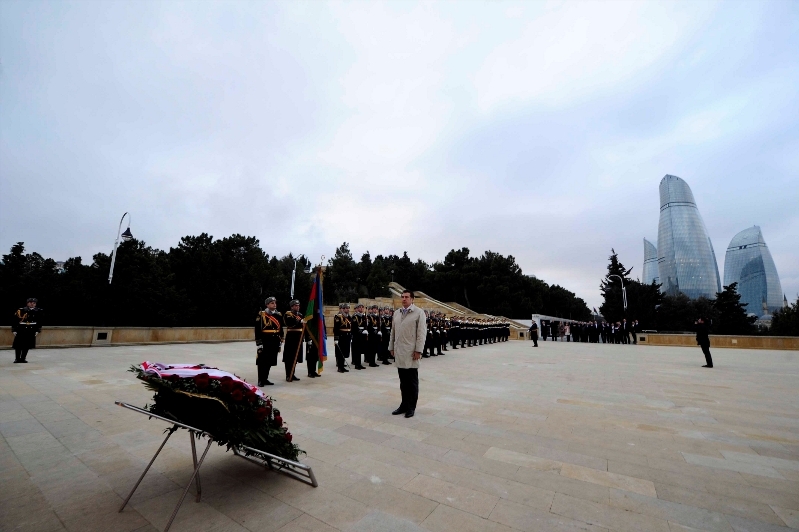 When Georgian President MIkheil Saakashvili made an official visit to Azerbaijan last week, he took with him a bit of his unique brand of anti-Russia rhetoric, saying that Baku today faces a similar threat from Russia as has Tbilisi. From Civil.ge:

After visiting Baku, President Saakashvili said that Russia was preparing the same "scenario" for Azerbaijan, which was applied against Georgia in last year's parliamentary elections when, as he put it, "oligarchs, Russian funds, blackmailing and provocations" were used.

In particular, Saakashvili mentioned the establishment of a diaspora organization in Russia made up of rich businessmen of Azeri origin, which he said posed the same sort of threat as did Bidzina Ivanishvili, the Georgian-born businessman who made billions in Russia and then became prime minister of Georgia on a platform of improving ties with Russia. Saakashvili also noted that Ivanishvili's government pardoned an ethnic Armenian activist, which he said was done "to please" Russia.

Azerbaijan has traditionally been very careful not to provoke Russia; while it similarly feels a threat to its sovereignty from Moscow, it has followed a somewhat more multi-vectored approach than has Georgia, maintaining good relations with Russia, alongside its ties to Turkey, Europe, the U.S, Israel. and others. And Russia, for its part, has not taken an aggressive position against Baku, seeming more interested in maintaining a regional balance of power between Armenia and Azerbaijan. So it's not surprising, as the opposition news site Contact.az notes, that officials in Baku publicly ignored Saakashvili's comments.

But in a meeting with a group of Turkish reporters in Baku, Deputy Prime Minister Ali Hasanov made the relatively rare claim that in a fight to regain Nagorno Karabakh, the breakaway territory that has been controlled by Armenian forces for two decades, Azerbaijan would not be fighting just Armenians but Russians:

“President Ilham Aliyev has always promised a military solution to the [Nagorno-Karabakh] conflict and he still has the issue on the agenda. The option of a military solution is always on the table, but the most important thing is how this kind of operation will be carried out. We need to become much stronger so that if we become involved in combat in Nagorno-Karabakh we can stand up to Russian troops, because that is who we will have to face. Did Armenia occupy our territories? Do you think Armenia's power is sufficient for that?” asked Hasanov....

Recalling his home city, which is also in the occupied territories of Azerbaijan, Hasanov said the occupation was accomplished with the military support of Russia. “I saw Russian soldiers get out of tanks and celebrate their victory with champagne.”

Russian support of Armenia twenty-plus years ago certainly does not guarantee Russian support in a future war. In theory, Armenia's membership in the Collective Security Treaty Organization obligates Russia (and other CSTO members) to come to Armenia's aid if it were attacked, but 1. if the war were limited to Karabakh (still internationally recognized as Azerbaijani territory), that wouldn't be a factor and 2. even if the war did spread to Armenia, it's not hard to imagine Russia thinking that it was not worth it to get involved. But if Hasanov is telling the truth, and Azerbaijan really believes that it needs to built up its military to be able to match Russia's, when does he think that would ever happen? Or is this a pretext, meant to buy time after so many years of bragging about Azerbaijan's growing military might that people might start wondering why Azerbaijan doesn't pull the trigger already?