The dispute over where the former Georgian president should be treated became sharper as he briefly lost consciousness as a result of his hunger strike. 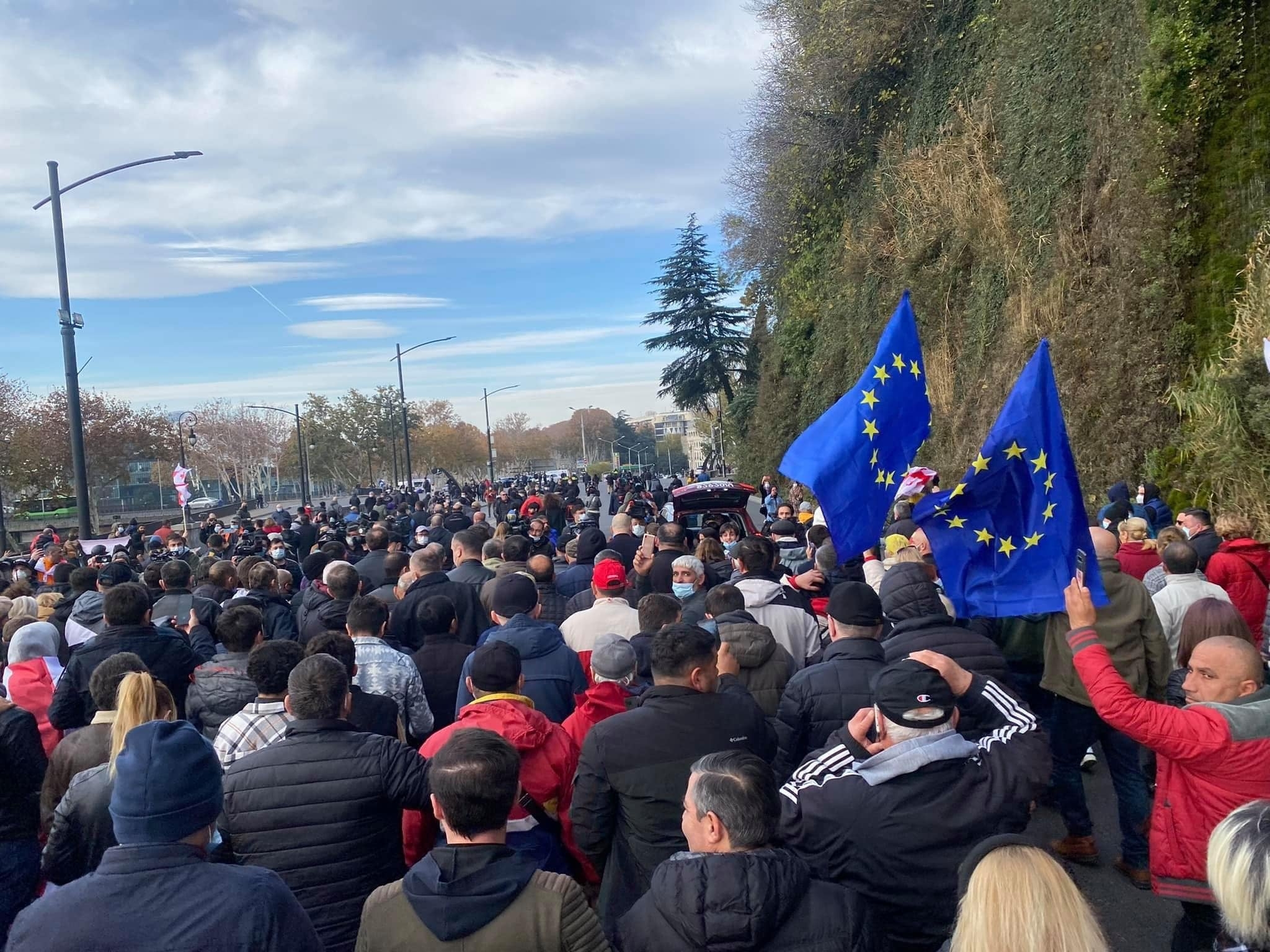 Meanwhile, Saakashvili has called on the United States to come to his defense as a “pro-Western leader.” The State Department has weighed in on the affair and tacitly endorsed the ex-president’s main demand: to be let out of prison and be treated at a civilian medical clinic.

On November 18, Saakashvili’s lawyer told journalists that he had lost consciousness and collapsed during a meeting with his lawyers, the news website Civil.ge reported. Soon after, the country’s Special Penitentiary Service issued a statement saying that his condition was stable.

Later that day, U.S. State Department spokesperson Ned Price issued a statement urging the Georgian government to “treat Mr. Saakashvili fairly and with dignity, as well as to heed the Public Defender’s recommendations about appropriate treatment.”

The latter call appeared to refer to the recommendations made by the office of the Public Defender a day earlier, based on an evaluation of a panel of doctors, to move Saakashvili out of the prison hospital in Gldani, on the outskirts of Tbilisi, where he is currently being treated. The Public Defender said he should be transferred to a “well-functioning and well-experienced poly-profile hospital, in particular an intensive care unit, the conditions of which cannot be provided by the clinic of Establishment No. 18. [where he is currently being held],” the office said in a November 17 statement.

Saakashvili has been behind bars since October 1, immediately following his surprise return to Georgia after nine years in exile in an apparent attempt to boost the opposition ahead of nationwide local elections. He had already been convicted in absentia of some crimes committed while in power from 2004 to 2012 and was charged with several more.

Since his return, the question of whether Saakashvili should be held in the prison hospital or treated in a civilian clinic has been the central battle between him and the government, led by the former president’s political nemeses in the ruling Georgian Dream party.

Saakashvili and his defenders say that the prison health care conditions are insufficient to treat the complications arising from his hunger strike. The government has countered that he should not get special treatment and that his demand is a pretext aimed at getting him into a lower-security site where his supporters could forcibly free him.

Saakashvili’s United National Movement party and other supporters have been holding a series of rallies in Tbilisi and elsewhere aimed at pressuring the government to soften their treatment of the ex-president, but they so far have failed to gain much traction. Other supporters have joined Saakashvili on hunger strike, led by Elene Khoshtaria of another opposition party, Droa, who has been refusing food for 17 days.

There are signs that the government’s resolve may be wavering, as a number of Georgian Dream members of parliament have recently expressed qualified endorsements of the idea of moving him to a private clinic. Deputy Prime Minister Tea Tsulukiani said on November 17 that he could be transferred to a civilian clinic if necessary, but that “as of now there are no grounds for a transfer.”

On November 19, Justice Minister Rati Bregadze proposed a transfer to a military hospital in Gori. There was no immediate response from Saakashvili or his supporters, but in a recent Facebook post the former president suggested that mooted proposals to move him to Gori were part of a Russian plot, given the close proximity of South Ossetia, where Russian troops back the de facto government there.

“I also consider Gori Hospital to be the biggest threat, as the Russian occupation army and special forces are located a few kilometers from this hospital,” he wrote on November 11.

The UNM and allied opposition parties consistently frame their battle with Georgian Dream as a West-vs-Russia proxy war, and have again seized on this narrative in the hunger strike battle. In the Facebook post, Saakashvili posited a variety of conspiracy theories about how the ruling party was managing the crisis so that it redounded to the advantage of Moscow, and that Russian President “Vladimir Putin is the only one who ordered this assassination.”

In a November 17 interview with the Bloomberg news agency, Saakashvili directly appealed to Washington: “If the U.S. doesn’t come to my defense it would be a terrible signal to all pro-Western leaders and populations” in the region, he wrote in handwritten responses to the agency’s questions.

While the State Department didn’t explicitly call for Saakashvili to be transferred out of the prison, it did address another issue more specifically: the government’s refusal to allow him to attend a series of trials in which he is being prosecuted for crimes he is alleged to have committed while in power. Several hearings on those cases took place over the last week and Saakashvili was not allowed to be there.

“We also strongly urge the Government of Georgia to ensure Mr. Saakashvili is able to attend all court hearings for his pending criminal cases, in line with international law,” Price said. “Mr. Saakashvili has a right to a fair trial, which includes the opportunity to attend court hearings in person should he request to do so.”

Former U.S. officials also have been weighing in. One former ambassador to Georgia, William Courtney, alluded to exasperation among Georgia’s western allies of the opposition’s obstructive tactics, which included boycotting parliament after they lost parliamentary elections last year.

“Certain political tactics by @SaakashviliM's party (UNM), such as refusing to take seats in parliament, may have affected Western attitudes toward the controversial former president,” Courtney tweeted. “But Western opposition to his mistreatment is strong.”

Another former ambassador, Ian Kelly, was more forceful. “Just take him to a damn civilian hospital, at long last,” Kelly tweeted. “Saakashvili has said he’ll end his hunger strike if he’s taken to a civilian hospital. Put a perimeter fence around it if you’re worried about unrest. Just do the responsible thing and do it.”

Kelly’s statement was widely covered in Georgian media and the current U.S. ambassador in Tbilisi, Kelly Degnan, endorsed her predecessor’s strong words. “I think you see there is great attention to this, not just at the U.S. Embassy, but in Washington, from other friends of Georgia like Ambassador Kelly, who are following the situation with concern,” she said on November 19. “We are very concerned about his condition. When human life is at risk there should be no debate about taking every step possible to provide the care that’s needed.”