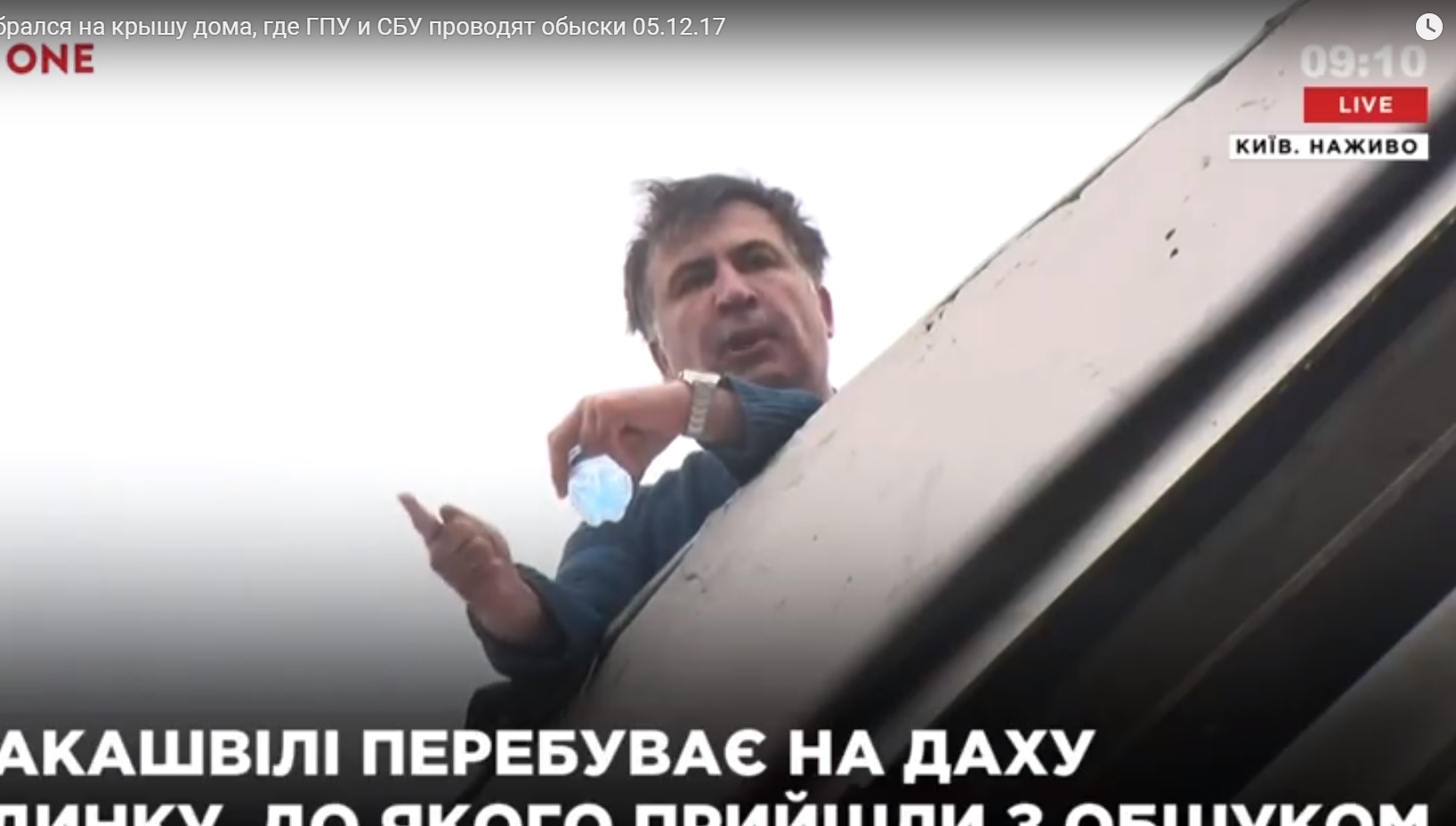 Mikheil Saakashvili addresses supporters outside his Kyiv residence on December 5 as Ukrainian special forces attempt to detain him on criminal charges.

After an hours-long standoff with law-enforcement, supporters of Mikheil Saakashvili gathered outside Ukraine's parliament on December 5 in the hundreds to demand the impeachment of Ukrainian President Petro Poroshenko. The rally follows a failed attempt by special forces to detain the former Georgian president on charges of allegedly plotting to overthrow Poroshenko and collaborating with "the Russian side."

Addressing supporters on Maidan, Ukraine’s revolutionary epicenter, Saakashvili, now an opposition politician battling the Ukrainian government over rampant corruption, vowed that Poroshenko will pay for his actions. “Poroshenko will never become Putin, because Ukrainians are a freedom-loving nation,” he thundered to ovations by a crowd of a few hundred flanked by law enforcement. “Today we have to show them the power of Kyiv . . . and the power of Ukraine.”

Wearing a scarf in the colors of the Ukrainian flag, he declared that he would stay in front of parliament "until these falsifiers will be forced to resign."

Ukrainian General Prosecutor Yuri Lutsenko, however, told parliament in the late afternoon on December 5 that his office would do "everything" to ensure Saakashvili's arrest "within the nearest 24 hours."

Disheveled and with his arms locked behind his back, Saakashvili had been pulled down from the roof of his Kyiv apartment by a Ukrainian special-forces team earlier in the day and forced into a police van.

In a briefing, General Prosecutor Lutsenko claimed that investigators had proof that Saakashvili supposedly received "around half a million dollars from the Russian side" via a businessman, Sergei Kupchenko, with ties to the ousted Ukrainian President Viktor Yanukovych, now living in Russia.

To substantiate the charges, Lutsenko presented to parliament audio and video materials from the investigation, including alleged recordings of a supposed discussion about payments between an unidentified representative of Kupchenko and Severion Dandgadze, a senior member of Saakashvili's Movement of New Forces.

Ukrainians have the right to criticize the government, but not to undermine the Ukrainian state, Lutsenko added.

In remarks to RFE/RL, Saakashvili himself denounced the government's case as "all fake."

Ukrainian opposition leaders also have condemned the allegations, accusing Poroshenko of a move toward autocracy.

The drama began to unfold in the Ukrainian capital in the early hours of Tuesday, as special forces began storming the former Georgian president’s apartment. Saakashvili fled to the roof of the eight-storey residential building, declaring that he would “stay there or jump.”

Panting and sipping water, he yelled from the roof that Ukrainian President Petro Poroshenko was doing the bidding of Russian President Vladimir Putin. “This is an order of Putin and they are committing this unlawful act in front of the whole world,” Saakashvili told supporters gathered in the street below. “I call on all honest Ukrainians to come to the streets.”

As supporters chanted “Mikhail” or “Misha,” Saakashvili claimed his arrest was the result of collusion between his archenemies – Russia’s Putin, Ukraine’s Poroshenko and ex-Georgian Prime Minister Bidzina Ivanishvili.

Armed officers in balaclavas eventually pulled Saakashvili down from the roof and hustled him down the building’s flights of stairs as his aides and supporters tried to intervene. An angry crowd stopped the vehicle carrying Saakashvili. The protesters deflated the tires of the van and one middle-aged woman appeared to have broken a window.

Special forces used tear gas in return. After several hours, the supporters managed to free Saakashvili from the van. TV footage showed a beaming Saakashvili surrounded by a crowd.

Speaking in front of parliament, Saakashvili told supporters that their actions had possibly "saved me from death."

The drama is the latest big development in the tribulations of the 49-year-old Saakashvili, a career crusader against corruption and Putin’s influence across the ex-Soviet world.

President Poroshenko appointed the corruption-busting Georgian leader as the governor of the region of Odessa soon after Saakashvili’s nearly decade-long presidency of Georgia ended in 2013. The new Georgian government, led by tycoon Bidzina Ivanishvili, brought a series of abuse-of-power charges against Saakashvili and members of his entourage. After becoming a Ukrainian citizen, Saakashvili was stripped of his Georgian citizenship.

Georgia has a standing arrest warrant out for him, but Ukraine has stated that it has no interest in extraditing Saakashvili now.

The Ukrainian prosecutor's office has stated that it will ask a court on December 6 to put Saakashvili under house arrest with a bracelet to track his movements.

Saakashvili can expect little of a soft touch from Poroshenko, a former university friend, whom he has accused of sabotaging attempts to end graft and oligarchic rule in Ukraine. Earlier this year, Poroshenko, himself a candy magnate, stripped Saakashvili of his Ukrainian citizenship in a purported attempt to exile the recalcitrant politician.

But Saakashvili, surrounded by supporters, forced his way back into Ukraine, overcoming border guards’ resistance at the Polish-Ukrainian border.

Facing ongoing charges of illegal border-crossing, Saakashvili, whose anti-corruption protests ended the rule of the late Georgian President Eduard Shevardnadze in 2003, had vowed to push Poroshenko and his allegedly kleptocratic government out of power. He organized mass rallies and offered himself as a prime minister.

Against that backdrop, little chance that he will back down now.