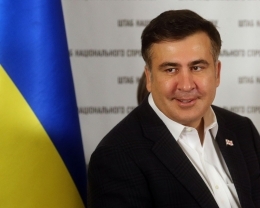 Earlier this month, former Georgian President Mikheil Saakashvili was appointed to a post in the government of Ukraine, head of the Advisory International Council of Reforms. But while "reform" may be the international brand Saakashvili had adopted for himself, his efforts for Kiev so far have centered around more short-term goals: acquiring western arms.

"Mikheil will become a representative of Ukraine abroad and, simultaneously, a representative of the international community in Ukraine," said the president of Ukraine, Petro Poroshenko, on the occasion of Saakashvili's official appointment. "We are confident that it is Mikheil who will establish a bilateral communication between Ukraine and the world on the issue of reforms. He will involve the best foreign experience and decently represent us abroad."

But since then, Saakashvili's focus has seemed to be elsewhere. "Helping Ukraine with weapons is the top priority right now," he told Ukrainian channel Espreso TV immediately after his appointment. "I will coordinate the issue in the coming days." He wrote an op-ed for the Washington Post this week in which he argued that (in addition to Kiev implementing unspecified "tough reforms") "the military cost for Putin must be raised by supplying Ukraine with defensive weapons, specifically antitank weapons that can halt the further advance of the Russian tanks and armored vehicles."

And on Wednesday, he posted on his facebook page that he's begun lobbying members of the U.S. Congress to allow American military aid to Ukraine. He "met with members of the committees of the Senate and House of Representatives, with other political leaders. The theme: to increase legislative pressure with the aim of supplying Ukraine with defensive weapons. I haven't met with so many legislators at the same time, even when I was president -- 34 meetings in three days, by my standards that's an overloaded schedule."

Kiev must be hoping that Saakashvili has better luck this time than in his last attempt at getting U.S. military aid -- for his own country -- which was not  successful.

Saakashvili's efforts notwithstanding, the White House remains undecided about supplying Ukraine with the weapons it wants, and the military is preparing assessments about what an aid package could look like. "I think that we have to be cognizant that if we arm the Ukrainians, it could cause positive results. It could cause negative results. But what we're doing right now is not changing the results on the ground," said General Philip Breedlove, NATO's top commander, in congressional testimony on Wednesday.