The ex-president’s unexpected return, and arrest, were of a piece with a Georgian political tradition in which nothing is as it seems. 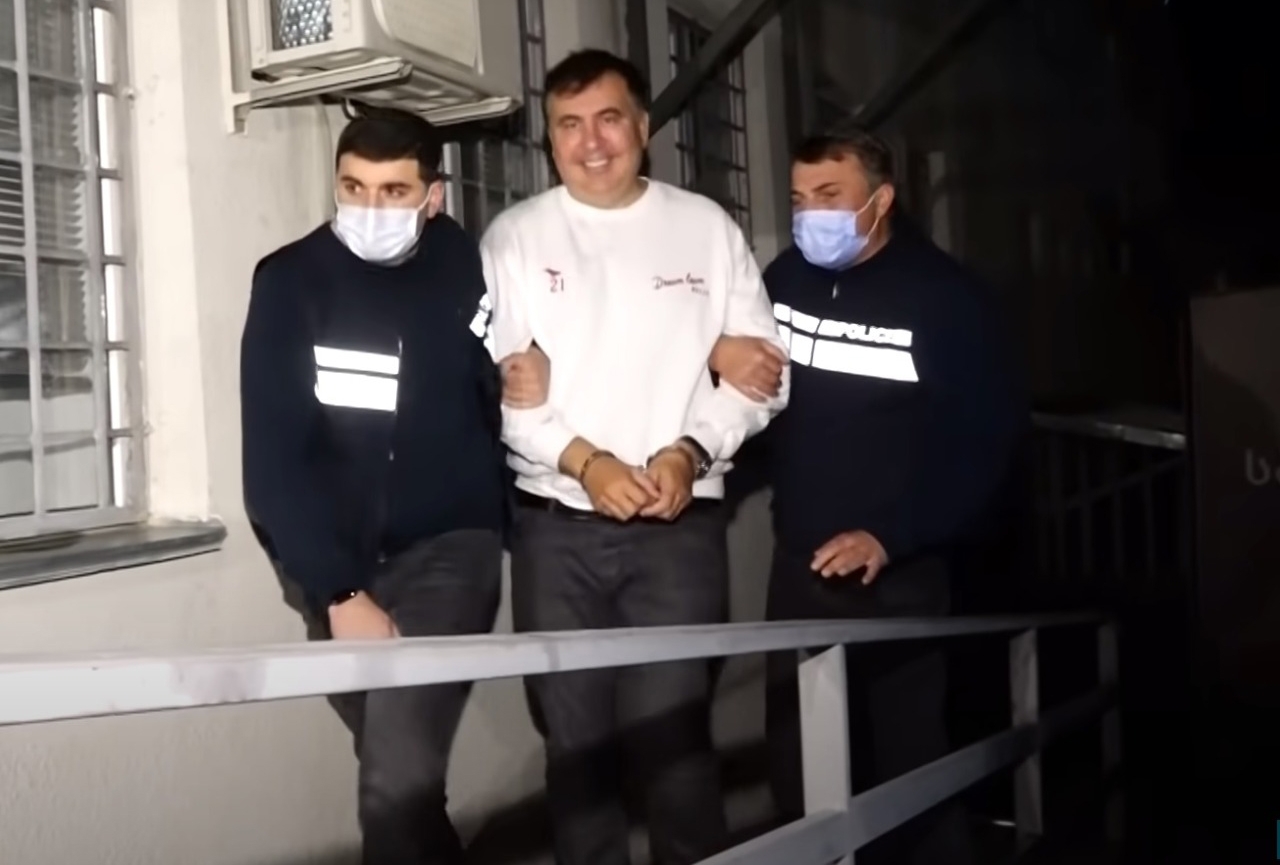 A screenshot of an Interior Ministry video featuring the ex-president.

The scandalous arrival in Georgia and subsequent arrest of former president Mikheil Saakashvili stole the show from pivotal elections over the weekend. Now the country is bracing for a runoff vote in a hyperpolarized political environment, as well a trial of the ruling party’s enemy number one.

Saakashvili surreal appearance and the no-less-unexpected events that followed put on full display the bizarre nature of Georgian politics, where nothing is as it seems.

The stage was set about a week before the October 2 vote, in which Georgians were to elect local officials around the country, when Saakashvili posted on Facebook a photo of a Kyiv-Tbilisi plane ticket for election day.

The former president, who ruled from 2004 to 2012, has been living in Ukraine in exile and is wanted in Georgia on charges of abuse of power that he calls politically motivated. But he vowed to return to Georgia to lead supporters in a battle royale with his archfoe Bidzina Ivanishvili, the billionaire founder of the ruling Georgian Dream party.

Then, the morning before election day, Saakashvili surprised everyone by posting a video of himself in Batumi, on Georgia’s Black Sea coast. He filmed himself walking around the city and calling on citizens to vote for United National Movement (UNM), the country’s leading opposition party, which he continues to de facto lead even though the party’s formal head is Nika Melia, its chairman and mayoral candidate for Tbilisi.

“I can tell you with full certainty that Saakashvili is not in Batumi and that the Saakashvili video was not recorded in Batumi,” claimed Irakli Kobakhidze, the chair of the ruling party.

The party’s executive secretary and designated spokesperson, Mamuka Mdinaradze, took it even further, declaring that the video was recorded in the Ukrainian resort town of Truskavets. “Our experts have conclusively confirmed that the video is fake,” Mdinaradze insisted in comments to journalists. He even named the Truskavets hotel in which Saakashvili was supposedly staying.

He piled on. “Is it not symbolic that he is in Trus Kavets?” Mdinaradze said. “Trus” is the word for coward in Russian.

Journalists and other Georgians immediately rushed to look up Truskavets and compare the city’s landscape to the urban backdrop in Saakashvili’s video. Investigative reporters struggled to identify hallmarks of digital doctoring in the video.

All this screeched to a halt in late afternoon when Prime Minister Irakli Garibashvili emerged to declare that Saakashvili had been arrested in Georgia. “With utter professionalism, our law enforcement agencies have completed the operation of arresting fugitive Mikheil Saakashvili,” Garibashvili said, insisting that he had known of the ex-president’s presence in the country all along.

“Which version of The Matrix are we in?” complained one journalist on Facebook, as reality seemed to multiply in a confusing fashion. “I would not be surprised if another Saakashvili arrives in Tbilisi on that flight tomorrow.”

In a coup de grâce to confused viewers, Garibashvili ended his Saakashvili-is-arrested speech by wishing billionaire Bidzina Ivanishvili a happy Bidzina Day, that is, the name day of every Georgian with that given name. Garibashvili’s display of servility to the behind-the-scenes leader, who technically does not hold any official or party post, only reinforced expectations that the court proceedings to come would be politically tinged.

Georgian citizens still were not sure whom to believe – as even Georgian Dream leaders had been making wildly divergent statements – until the authorities released a video of a handcuffed and inexplicably grinning Saakashvili escorted by police officers into jail.

Saakashvili ended the day with a non-sequitur of his own: an announcement that he is starting a new life with a new partner, a 30-year-old Ukrainian politician, Lisa Yasko. “Lisa and I have decided to tell everyone that we are together,” he said in a video that Yasko posted following Saakashvili’s arrest. “We would like to wish everyone happiness,” he said in Georgian and then repeated in Ukrainian. As he spoke Yasko remained silent, merely looking into the camera with a smile.

Then Garibashvili apologized to members of his party for keeping them in the dark about the true situation with Saakashvili for the entire day. He claimed it was necessary to carry out the arrest, even though it left key figures of the ruling party in an embarrassing situation. “I’m disappointed on a personal level, but I understand,” said party secretary Mdinaradze, who has since become widely lampooned on Georgian social media for his “Truskavets” remarks.

How exactly Saakashvili smuggled himself into Georgia remains unclear, but it is not the first time he violated an international border. In 2017, he forced his way from Poland into Ukraine after then Ukrainian President Petro Poroshenko, a former ally-turned-foe, tried to expel him from the country. He remained a political tumbleweed, fighting political battles in Georgia and Ukraine, despite attempts in both countries to get rid of him. He recently had been serving as an adviser to the current Ukrainian president, Volodymyr Zelensky.

The impact of the Saakashvili drama on the election results remains unclear. Some have argued that his ability to sneak into the country gave weight to long-running accusations of growing dysfunction under Georgian Dream, and that his imprisonment will gnaw at the party from within. Others argued that it in fact helped Georgian Dream, by mobilizing potentially opposition-leaning but anti-Saakashvili voters, and that the ruling party got the upper hand in the end by securing his arrest.

Garibashvili claimed that Saakashvili’s arrival helped the opposition and accounted for a loss of support for Georgian Dream of about 7 to 8 percent. The party nevertheless won close to 47 percent of votes nationwide in the proportional race for city council seats. UNM came in second by that standard, with about 30.7 percent. Georgian Dream’s mayoral candidates failed to surpass the required 50 percent threshold in the key cities of Tbilisi, Batumi, Kutaisi, Poti and Rustavi; runoffs are scheduled for October 30.

Saakashvili’s legacy in Georgia is mixed; he is seen both as a post-Soviet corruption-defeating modernizer who put the country on the map and a semi-autocratic opportunist who ruled Georgia with a strong arm. For the nine years since coming to power, Georgian Dream officials have constantly spoken about what they called the “bloody nine years” of Saakashvili’s rule before them. Every election season, the party tries to scare voters by presenting themselves as the only bulwark against a Saakashvili return.

If any alternatives to UNM or Georgian Dream appear on Georgia’s political field, the governing party immediately dismisses them as Saakashvili supporters. The local election results showed that the country remains divided between these two parties, but there is also a palpable voter hunger for diversifying between the two poles.

Garibashvili, in the meantime, is doing his best to damage the already questionable reputation of Georgia’s legal system, suggesting that the courts will do what his party says with regards to Saakashvili. “We will bring more charges against him, if he does not behave,” the prime minister said.